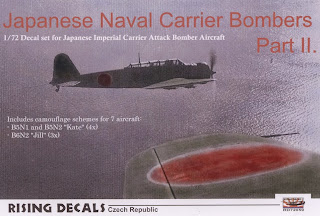 A veritable cornucopia of colourful decals for Japanese aircraft in 1/72nd scale is provided by these three new sets from Rising Decals. First up is RD72059 with the continuation of Japanese Naval Carrier Bombers Part II containing markings for four 'Kates', two B5N1 and two B5N2, and three B6N2 'Jills' 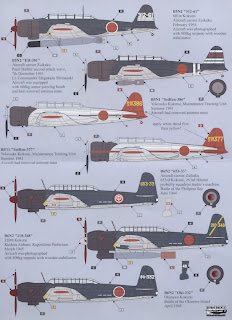 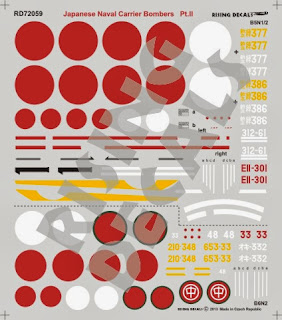 A useful set offering some welcome alternative markings for Hasegawa's ex-Mania 'Kate' and especially for Fujimi's 'Jill'. As always with Rising excellent colour printing and saturation. Bear in mind if building the Pearl Harbor 'Kate' that although the colour call out given is for standard IJN Green the matt dark green paint on the aircraft downed during the attack has been reported to be in the range FS 34079-34064-34084. Overall and under surface colours were the amber grey factory colour, approximately slightly lighter than FS 16350. 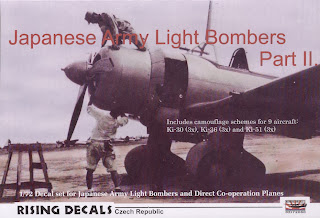 Next is Part II of Japanese Army Light Bombers as RD72060 providing markings for three Ki-30 'Ann', three Ki-36 'Ida' and three Ki-51 'Sonia'. Very appealing this one, with some colourful and unusual insignia. 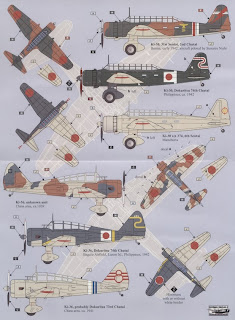 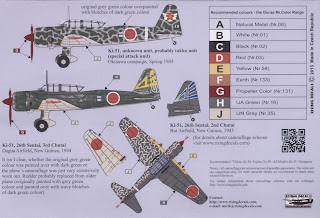 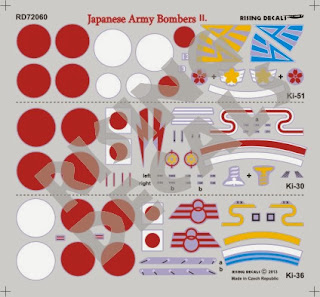 
As usual with Rising all the schemes on this sheet are interesting and well-chosen, providing lots of opportunity to model something different from the kits suggested. Hasegawa's ex-Mania 'Sonia' is still the only game in town but a good one. Fujimi's Ki-36 is an enjoyable classic with ripe poential for enhancement and AZ Models has issued a revised and improved version of Pavla's Ki-30. I doubt we shall see 'Ann' from Fujimi or Hasegawa any time soon but one can live in hope and these decals certainly sharpen that aspiration. 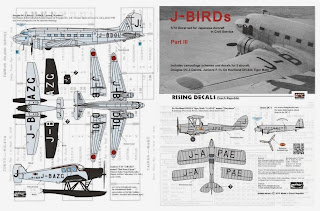 Last but not least is another set to cover Japanese historical civil aviation subjects as  RD72062 J-Birds Part III with markings for a Douglas DC-3, a Junkers F-13 with sea boots and a Tiger Moth. There are bonus markings for DC-2 too! 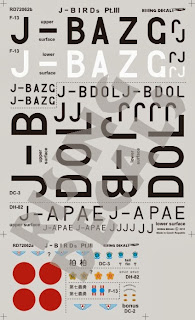 That Japanese Police Tiggie has to be one of the
more unusual options for the classic biplane!


A very nice set filling another gap in options for anyone looking for unusual and off-beat schemes for classic aircraft. Fortuitously Airfix have a newly-tooled DC-3 and Tiger Moth scheduled for 2014 and if they are anything like their recent new tool releases they will be worth waiting for. With special thanks to Mirek for providing the opportunity to preview these excellent decal sets.

*The Arii (ex-LS) kit of the Ki-46 depicts a similar tri-tone scheme but shows three distinct upper surface colours (as opposed to two colours combined with the overall grey-green). These are described in the instructions as 'deep green colour' (nou ryoku shoku or ko midori iro 濃緑色), 'tea brown color' ( cha kasshoku 茶褐色) and 'light brown colour' ( unusually written as  usu cha iro 薄茶色 - the first character 薄 usually means weak or diluted and I have seen this colour term described as 'buff' in an old Japanese dictionary, whereas a more common term for light brown is tan kasshoku - 淡褐色. I think there is a distinction to be made here between a light brown per se and a genuine buff colour or true khaki). All three colours need to be mixed from various combinations of the basic Gunze (GSI Creos) colours green, yellow, brown and black. This is not to suggest the descriptions or mixing ratios are correct but only to note and record it for information. The colour term cha kasshoku is an interesting one as I have seen it translated variously as tea brown, yellowish brown, dark reddish brown, liver colour and brown slightly tinged  with black!

These look superb and are great choices; hope at least some appear soon in 1/48. As to the 'naka' character on the B6N fuselage hinomaru, I had thought these were for training purposes, with pilot's initials in temporary paint to judge deck landings, etc. Whether accurate or not,this memory probably came from reading about this practice being used in 653rd, an example of which was seen in a Model Art foldout showing A6M5 653-67, which had the katakana character on the sun disc underwing also.

Merry Christmas to all who enjoy this blog, and to its Executive Officer - you've brought us a lot to enjoy this year, Nick. Thanks.

Best Seasonal Wishes to you and all of the readers of this fantastic blog!

Thanks for the notice on these sheets, Nick.