Yet More Hayate Thoughts ~ The Non Standard Schemes Part One 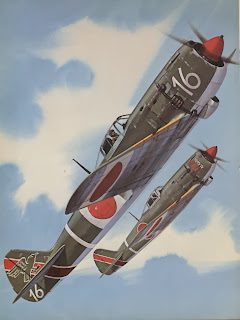 The star-spangled Hayate attributed to Corporal Noburo Naito was brought to attention in the West by the Richard Ward profile (below) which appeared in the Aircam Aviation Series book of 1971 - 'Nakajima Ki.84a/b Hayate in Japanese Army Air Force Service'. It later appeared, similarly presented in a solid dark green colour scheme, in the splendid cover painting by artist Otto Kuhni for Scale Modeler magazine of September 1972  (above), depicting it as the furthest of two hard climbing Hayate of the interesting 520th Rinji Bôju Sentai, one of the few Hayate units to actually qualify as B-29 interceptors. According to an earlier Japanese reference book 'Japanese Military Aircraft and Air War' Vol.4 Corporal Noburu Naito of the Kurata tai (sic. Lt Kurai's unit) had shot down one B-29 and damaged  two. Aircraft '16' with the eagle and bomb motif was flown by Cpl Kuroiwa and Cpl Naito's aircraft '24' carried the motif of a leaping hare on the port side of the cowling above that number. 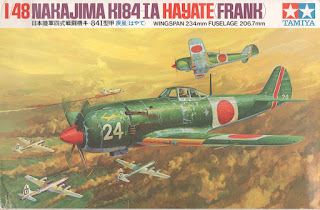 The box art of the Tamiya 1/48 Ki-84 released in 1972 depicted Cpl Naito's '24' (above) about to attack a formation of B-29s, its white Homeland Defence 'bandages' applied as rectangular 'flags'. The aircraft is depicted with solid dark green upper surfaces, without an anti-glare panel, and the instructions suggest blue for the under surfaces. In the instructions Naito is referred to as Staff Sergeant Joten Naito and the aircraft as being flown from Nakatsu airfield from March to May 1945.
The 520th originated in the 1st Rensei Hikotai (Operational Training Unit), also coded as the Tobu (Eastern) 133rd unit or Kon (Dark Blue) 520th unit. According to Yoji Watanabe the unit was formed from the 1st Rensei Hikotai at Sagami (now Nakatsu) in Kanagawa on 22nd July 1944 for operational training and to provide an air defence interception capability using shotai (flights) led by instructors and composed of the most talented student pilots fresh from flying schools. The unit had about 100 pilots, mostly 18-19 years old  with "student pilot" Sergeant rank. It was commonly referred to as the 520th Rinji Bôju Sentai (臨時傍受戦隊) meaning  temporary (or special, extraordinary) air defence (interception) unit. The unit was mainly equipped with the Ki-84 but also operated the Ki-27 and Ki-43. After January 1945 they engaged briefly in air defence interceptions, but from March they were re-organised into tokubetsu kôgeki tai (usually abbreviated as tokkô tai ) special attack units for the battle of Okinawa, their aircraft upper surfaces re-painted in an almost black dark green with Hinomaru retained only on the underside of the wings and each pilot's individual motif applied in white chalk.

According to Allied intelligence sources the 1st Rensei Hikotai had been formed in April 1944 to provide operational (or advanced) fighter training with Ki-54, Ki-55 and Ki-79 (Mansyu Type 2 advanced trainer) aircraft. The training unit came under the 102nd Kyoiku Hikodan (Training Air Division) headquartered at Gifu and was also noted as using Kagamigahara airfield. From July to August 1945 the 1st was noted as  "training NCO pilots on fighters and light bombers under 52d FDk."  The 10th May 1945 intelligence summary (page II-9) recorded that virtually all of the fighter Rensei Hikotai "are largely equipped with combat type aircraft" and that many "have been used tactically for convoy escort, anti-submarine patrol and interception." According to Mr Watanabe the 520th special interceptor unit was under  direct 1st Air Army command. 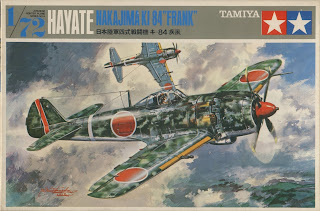 Naito's eponymous Hayate was one of the options included in Tamiya's second issue of their 1/72nd Hayate kit FA104  from 1971 and also featured on the box art  (above), but curiously only showing the starboard side of the aircraft. It was  presented both on the box art and in the instructions (shown below) in a mottled colour scheme noted as  being "spotted painting of dark green colour on the blue ground".  The blue was described in a 1968 AiReview magazine article on the 520th by Rikyu Watanabe as a 'beautiful' light blue similar to the Luftwaffe's Hellblau rather than the standard Army grey green colour. The 1st/520th unit marking was a diagonal red band with white border on the vertical fin but each formation painted a distinctive colour on the spinner whilst formation leaders were distinguished by two or three white bands on the rear fuselage. For a brief period some aircraft had the leading edge of the fin painted yellow rather than the diagonal red band. The 'coloured' lower portions of the wheel covers frequently shown in illustrations of Hayate from this unit were in reality just the distinctive heavy staining from the lower cowling exhaust outlets which passed over those parts of the covers in flight. 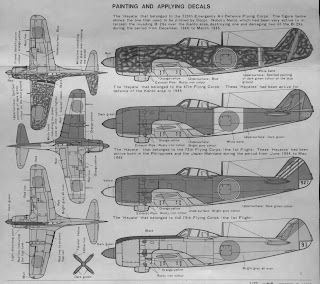 Although Sergeant Noburo Naito was indeed a pilot in the 520th the famous Hayate with the shooting stars on the cowling was in fact the regular mount of his squadron leader 2nd  Lt Toshizo Kurai and appears in photographs in Yoji Watanabe's 'Pictorial History of Air War Over Japan - Japanese Army Air Force' (Hara Publishing 1980) and in the January 2001 Koku-Fan magazine. These show the aircraft with a mottled rather than solid finish and with one and later three white fuselage bands. The Koku Fan photograph shows two  'shooting stars' whilst a photo of the sleeve of Lt Kurai's flight suit in Mr Watanabe's book shows five embroidered 'shooting stars' to represent his claims. As was often the case the markings on this particular aircraft probably did not remain static but changed over time with the fortunes of its pilot(s). Also the shooting star emblem might have been a standard 'kill' marking within this unit. The colour scheme and markings of Lt Kurai's aircraft were as shown below in the profile and notes from the excellent Lifelike Decals sets 72-013 and 48-013 for the Ki-84 Hayate. 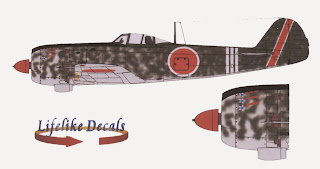 Lt Kurai's aircraft also featured in a 2002 limited edition issue from Hasegawa of their veteran 1/72nd Hayate kit (below) but in my own example the decal sheet is misprinted and the "shooting stars" consist only of blue discs and red comet tails with no white stars. The aircraft is depicted without fuselage bands and the option to place the "shooting star" decals on both sides of the cowling. The green mottle is shown over grey green and not the primary source description of light blue in the 1968 article. A second 520th option in solid dark green colour with two white fuselage bands is also included and a photograph of this machine may be found on page 181 of Kojinsha's excellent Maru magazine special # 8 'Japan No1 Fighter Nakajima Ki84 Hayate'. Interestingly the suggested cockpit interior and wheel well colour for this kit is GSI Creos 331 which represents BS381c # 638 Dark Sea Grey. 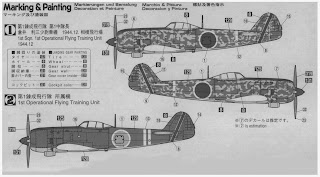 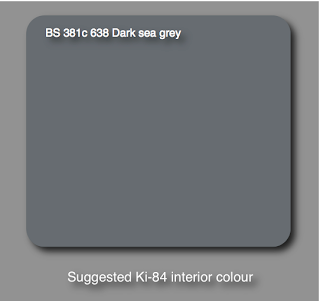 In addition to this the markings of this aircraft were featured in 1/72nd scale on Microscale decal sheet 72-167 Axis Aces WWII (below) and in 1/48th scale in Aeromaster 48-616: Ki-84 pt II. Aeromaster's subject is depicted in a plain dark green scheme. A line up photograph of 1st/520th Hayate fighters shows the aircraft in a mix of natural metal, solid and mottled finishes. Lt Kurai was killed on 10 February 1945 when he reportedly rammed a B-29 and his parachute failed during the costly raid against the Nakajima assembly plant at Ota.

The star-spangled Hayate is a worthy modelling subject, featuring a challenging colour scheme and representing both an interesting unit that pioneered the Ki-84 in its limited B-29 interception role over Japan and a pilot with multiple B-29 claims. Most scale models of Hayate seem to favour the "standard" solid schemes but in this and future Hayate Thoughts articles some different and non-standard schemes will be explored.  Previous articles in this series may be found here and here.

With special thanks to Mr Ryusuke Ishiguro.

Thanks for taking time to do the research on this one, Nick.

Thank you very much for the article on the 520th, Nick. I don´t recall reading so much information about this unit in English before. Brings also a new life to the old Microscale decal nr. 167, Axis Aces, since the Lifelike decal is impossible to get nowadays.

Thanks Daniel for mentioning the Microscale decal sheet which I had forgotten about. I shall add it to the article!

So many Franks, so little time. My next one will be the 520th blue with green mottling Hayate per Rikyu Watanabe.

Thanks again for this information Nick!