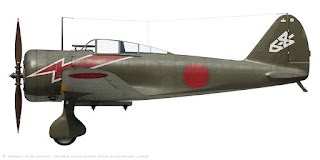 Tokubetsu kôgeki - special attack - was a Japanese military euphemism for the tactic where aircraft would be deliberately used as piloted flying bombs to destroy Allied ships, the pilots expected and expecting to die in the attempt. Towards the end of 1944 the Japanese military determined that special attacks would be the most effective way to destroy Allied surface fleets threatening invasion of the home islands. In pursuit of this doctrine they began to form special attack units (tokubetsu kôgeki tai usually abbreviated to tokkôtai), and undertook the wholesale conversion and preparation of obsolete types of aircraft with which to conduct the operations. By the time that the Air General Army was formed for the final defence of Japan in April, 1945, a total of 800 aircraft had been prepared for special attack. This total included large numbers of obsolete Ki-27 fighters and trainers, together with Mansyu Ki-79 single and two seat trainers.

The programme, which was hampered by Allied air attacks, involved the conversion of bombs, mountings and detonators with which to arm the obsolete aircraft. In order to complete this work the Japanese Army had to suspend research and development work on new weapons, instead diverting facilities and personnel to work on the preparation of suitable bombs. Those included modified IJNAF bombs with the Type 99 No.25 250 kg bomb typically being adapted for the Ki-27. The heavy bombs on fixed racks had a profound effect on the performance of the aircraft. The pilots, mostly novice flyers with a scattering of more experienced airmen and leaders, were in the main volunteers. Their aircraft were otherwise unarmed and they depended on escort fighters, not always provided, in order to reach their targets safely.

Typical of those units was the 68th Shinbu-tai (振武 Shinbu - stirring the martial spirit and 隊 tai - unit) formed by the Hitachi Air Training Division on 23rd March 1945 and established at Tenryu airfield in Shizuoka Prefecture on Honshu with a complement of 12 Ki-27 Nates under the command of 2 Lt Iichi Yamaguchi, whose Ki-27 is the subject of the heading profile by Ronnie Olsthorn. The Ki-27 is shown painted in the late war olive brown # 7 colour but special attack Nates were also painted dark blue and dark grey. From photographs of this aircraft it appears that the lustrous paint was newly applied and there is little flaking or wear. The unit insignia consisted of the numbers '6' and '8' fashioned into the shape of a bomb, but might not have been applied to all aircraft of the unit. At the top of the rudder were the characters for the Yamaguchi family name. The 68th moved to Chiran on Kyushu in preparation for attacks on US shipping laying off Okinawa and commenced operations on 8th April 1945. Also participating in these attacks as part of the Dai Ni Kikusui Sakusen (2nd Floating Chrysanthemum Operation) was Nekohashi-tai, the 42nd Shinbu-tai consisting of 12 Ki-27 Nates under the command of 2 Lt Yoshiaki Nekohashi.  This unit was formed on 29th January 1945 at the Akeno Air Training Division and all its pilots were officers.

The first clash between these units and the US Navy occurred on the morning of 11 April 1945 when several groups of Japanese aeroplanes began approaching the Radar Picket (RP) stations  protecting the fleet. Corsairs from USS Intrepid intercepted a formation of 12 Ki-27 Nates approaching from the north and claimed to have shot down all of them.  On 12 April at 1352 hrs five Nates attacked LCS(L) (Landing Craft Support - Large) 57, part of RP 2 which had already come under attack from Japanese naval special attack aircraft. Three of the Nates made a co-ordinated attack on the vessel and two were shot down whilst the third, badly damaged, crashed only ten feet from the ship and blew an eight foot hole in its hull. The ship’s steering was damaged and she began to list so her commander Lt Harry L Smith implemented emergency steering and ordered her to sail towards Okinawa. As the ship withdrew a fourth Nate attacked her but was shot down by CAP (Combat Air Patrol) fighters and the ship’s defensive fire. At 1430 hrs a fifth Nate managed to evade the CAP and survive the ship's defensive fire to crash into her bow, destroying a 40mm gun position and killing two of the crew.  Despite the damage and fire on board LCS(L) 57 managed to stay afloat and even to rescue survivors from LCS(L) 33 which had been sunk during the attack. 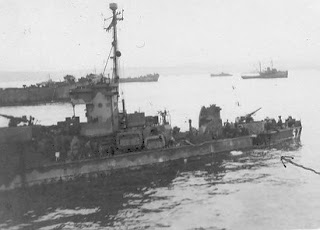 On the same day the destroyer escort USS Rall DE 304, part of the submarine screen of Task Force 51.5, was attacked by two aircraft that had managed to penetrate the picket ships and CAPs. One of these aircraft, a Nate, approached Rall from her starboard side whilst the other approached simultaneously from port. The ship’s defensive fire brought down the port side attacker but the Nate kept coming only ten feet above the water and slammed into the hull just below deck level. The Nate’s 250 kg bomb was hurled through the ship during the impact, exited the far side and exploded 15 feet from the ship. Despite a continuation of attacks by other aircraft, including a strafing Ki-43 Hayabusa which set off a depth charge locker, Rall also survived. 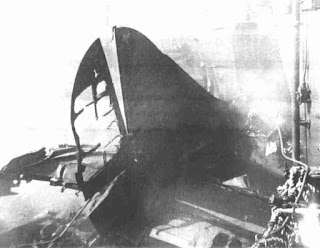 In an attempt to prevent the bombs being thrown from the racks on impact and passing through the targeted ships before exploding the IJAAF began fitting extended strikers protruding ahead of the aircraft so that the bombs exploded on contact with the hull.

Other tokkôtai units know to have used the Ki-27 for suicide attacks were the 41st Makoto Hikotai (Honesty or loyalty air unit), the 76th Shinbu-tai and the 108th Shinbu-tai. Despite the determination  of the young Ki-27 pilots who had sacrificed themselves on 12 April, the fate of the special attackers encountered by the Corsairs of VMF-323 “Death Rattlers” on the late afternoon of 28 April 1945 was the more typical outcome. The 12 Corsairs under the command of Maj George C Axtell were assigned to picket duty over the radar picket destroyers north of Okinawa, flying at 12,000 ft when Lt Jeremiah J O’Keefe spotted five bogies at 8-10,000ft in clear, sunny weather. Obtaining permission for his division to investigate O’Keefe identified the enemy aircraft as bomb-laden Ki-27s. The three Corsairs, Axtell, O’Keefe and Hood circled the formation of Nates which made no attempt to evade and then attacked them from 5 and 7 o’clock. O’Keefe hit the lead aircraft in the cockpit from 300 yards, exploding it. Streaking past the falling debris in a shallow dive he saw another Nate diving towards the sea and lining up on its tail exploded that one too. Bill Hood also downed two Nates and Axtell one. None of the Ki-27s had made any attempt to defend themselves and their only evasive manouevres were to dive towards the sea when attacked.

This article completes the publication of the omitted chapters from my Ki-27 Aces. Previous Ki-27 Aces Extras - # 2 The Attack on Hong Kong and # 1 Royal Thai Air Force Nates may be found here and here.

A big thank you for this complement!

Good to see Ki-27 'Nate' Aces "completed". Thanks for the credits. This probably was my favourite profile of the bunch, with the bomb and garish markings. I still fully intend to create an artwork of one of the F4U/Ki-27 encounters.