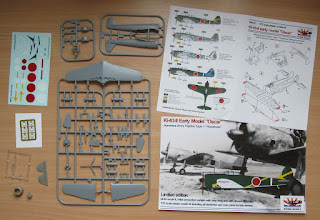 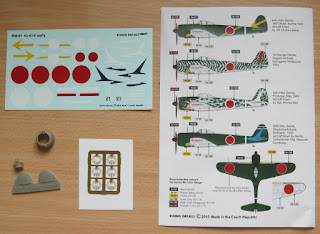 The early production version of the II can best be distinguished in photographs by the small wedge-shaped auxiliary oil cooler beneath the cowling. This variant had an upgraded Ha-115 engine driving a three-bladed propeller with a downdraft carburettor intake located internally in the upper lip of the cowling, a reflector-type gunsight and the revised canopy design, but retained the annular oil cooler and original long wingspan of the Ki-43-I. Two prototypes were constructed in February 1942 but quantity production did not begin until December of that year with the first examples reaching operational units in early 1943. Some early Ki-43-II 64th Sentai examples appear in photographs with their headrests removed. The exact point of changeover to the later production II variant with the larger honeycomb oil cooler under the cowling and shortened wingspan is not known for certain but it was noted in the HQ SEAC Weekly Intelligence Summary # 16 of 5th March 1944:-

"Recent information from Technical Intelligence has now settled satisfactorily the question of the fighters in Burma with 'square wing tips'. It will be recalled that over a period these fighters have been constantly reported as HAMPS presumably because of the common characteristic of wing tip shape. It has now been established that this is the final development of Type I Fighter Oscar Mark 2 which has a reduced wing span, with blunt rounded tips, and this may give the false impression of HAMP. This new type of fighter has been identified since the withdrawal recently of some fighter strength and a reasonable assumption is that OSCAR Mk 2 will for the present form part of the normal replacement to fighter units."

The 64th Sentai Hombu and 3rd Chutai had withdrawn to Malaya in September 1943 giving a tentative date for the arrival in Burma of the short wingspan Oscars as the autumn (fall) of 1943. This in turn suggests the production figures for the early II with long wingspan was approximately 800 aircraft from December 1942 to circa August 1943.

Rising Models early production II kit will be an excellent and unusual addition to any Hayabusa line up. 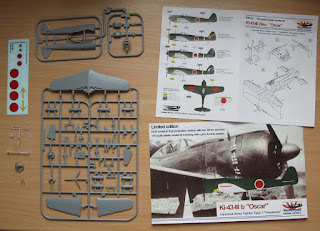 RM-02 Ki-43-III b "Oscar" contains the Special Hobby Ki-43-III Ko kit with parts to make the experimental Otsu variant armed with two Ho-5 20mm cannon in the cowling position. The conversion parts consist of a new resin cowling and the raised fairings for the Ho-5. Decals for four options are provided:- 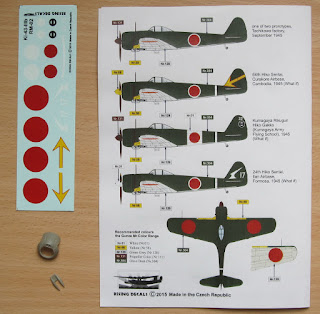 The kit compromises on accuracy because on the real Otsu the fuselage forward of the windscreen was lengthened by 20cm (approx 2.77mm in 1/72nd scale) and this is not represented by the conversion. Panel lines behind the cowling were also altered and the flaps on the aircraft were modified to a rectangular split-type rather than retaining the eliptical 'butterfly' flaps of the original design so sticklers for absolute accuracy will have a bit of work to do if they want the model to be exact. The design of the Special Hobby kit should facilitate the addition of a laminated styrene plug in front of the firewall, a technique I used for the LS Oscar (below) and which permits both an accurate dimensional increase and the tapering behind the cowling flaps to be represented, but the new panel lines would be tricky to add. 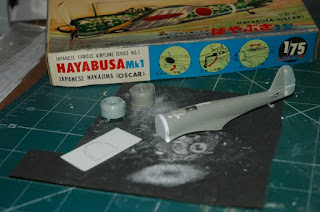 The usual explanation for the lengthening of the fuselage is that the aircraft centre of gravity had to be altered but it seems more likely that it was just to enable the larger weapons to fit. The Ho-5 was just over 30lbs heavier and 13.3cm longer than the Ho-103. Two aircraft were converted in December 1944, one of which was c/n 7884, but the performance of the aircraft was found to be so degraded during flight testing that it was decided not to proceed with production of this variant. With some reservation over the compromises to accuracy this kit will make another fine and interesting addition to a Hayabusa line up.

This is most certainly Yilan, north-eastern coast of Taïwan, south of Keelung, about 50 miles south-east of Taipei, and facing the last islands of the Okinawan chain.

HIS writes it as 'Ilan'.

Nick,
Thanks for this, these look like exciting news for 1/72 scale. Rising Decals, like Lifelike, always comes up with interesting markings choices, and both the 54th FR schemes are different than the ones we usually see. Both are illustrated in the wonderful Model Art 406 on Hayabusa.

While I commend Rising Decals for doing a kit for the Ki-43-III Otsu I think such a subject would be better represented in a larger scale, where the differences could be better appreciated and the fuselage length issue could be addressed. I hope they will at least offer a conversion kit in 1/48 with a revised cowling and fuselage plug in the future. Thanks for the as always well done review!

This is great news! I'm going to have to look for these at my usual mail order sources.