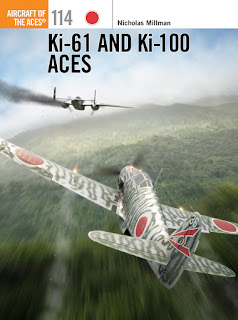 There appears to be a certain amount of confusion about the difference between a Kawasaki Ki-61 Hien and a MiG-17 jet in some quarters, an error apparently more difficult to resolve than it was to perpetrate. For the avoidance of any doubt here is the correct cover art by Ronnie Olsthoorn for Osprey's forthcoming Aircraft of the Aces 114. It depicts the Ki-61-I Otsu of Sgt Susumu Kajinami of the 68th Hiko Sentai attacking the B-25 'Little Stinky' (41-30080) of the 501st BS near Boram, New Guinea on the 22 December 1943. Flying as wingman to the more experienced M/Sgt Matsui in this particular encounter, Sgt Kajinami went on to claim a total of eight enemy aircraft destroyed and 16 probables over New Guinea, surviving that campaign and the war.

The Sentai had recently received some Hei variant Hien with imported Mauser Mg 151/20 20mm cannon as wing armament and these were allocated to the best pilots, including the unit's leading ace Shogo Takeuchi. He had been killed the day before the air battle on 22 December, attempting to land his combat damaged Hien at one of the advanced airfields at Hansa Bay. M/Sgt Matsui was flying a Hei on 22 December and it appears that some of the B-25 crews might have mistaken 20mm hits for flak damage.

Ah thanks! I'd seen the "MiGstake" in the latest Aeroplane Monthly. Glad it was only the artwork and not the title that was wrong. Thats a cracking cover though!