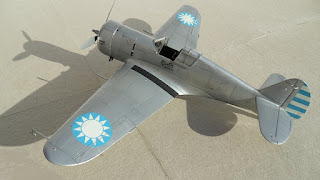 John Haas kindly shared these images of his splendid Curtiss Hawk 75 built from the 1/48th scale Hobbycraft kit  in Republic of China markings. The story of the Curtiss Hawk monoplanes in Chinese service may be found here and here. 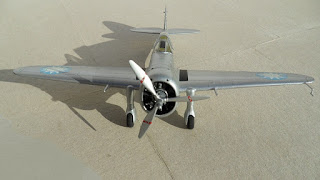 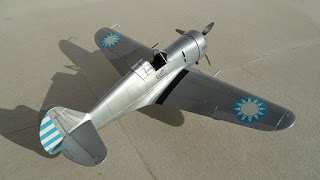 John's model represents the Curtiss 'Hawk Special', also known as the 'China Demonstrator', NR1276, (c/n 12327), as photographed at the Curtiss factory on 16th April 1937. Although NR1276 is often referred to as the first H75-H it actually appears to be the pattern aircraft for the H75-M, an export version of the Curtiss Hawk specific to China. 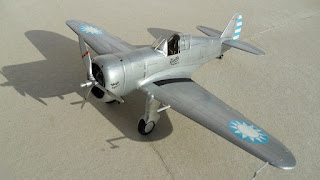 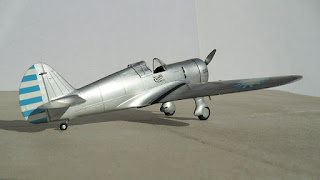 Les Moore kindly provided these images of his excellent Martin B-10 bomber wearing Chinese insignia and representing an aircraft of the 30th Squadron. The model was built from the classic 1/72nd scale Williams Brothers kit and constructed from the box except for the machine gun and pitot tube which were fabricated from .016 guitar string.  Les painted it with War Birds acrylic and Testors enamel paints. 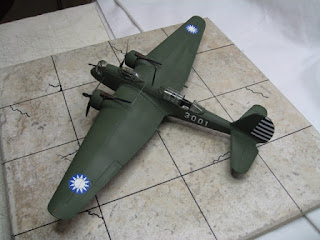 The Chinese government purchased nine Martin M-139WC-1 and M-139WC-2 export versions of the bomber, the first six delivered in two batches of three in February and May 1936. The final three arrived at the end of 1936 via Manila and Hong Kong. The first six bombers were assigned to the 8th Air Group's 30th Squadron and the subsequent three bombers to the 14th Squadron, also known variously as the 14th International Volunteer Squadron or the 14th Volunteer Bombardment Squadron. This unit, commanded by Vincent Schmidt, a First World War veteran from New York, consisted of foreign volunteer pilots from the USA, France and New Zealand flying with Chinese bombardiers and gunners, and was also equipped with Vultee A-19, Northrop A-17 and Gamma 2E types. 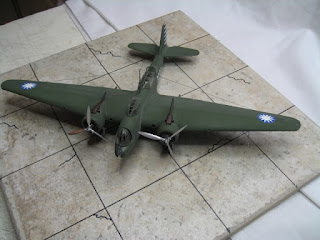 In May 1938 the two surviving Martin bombers from the 14th Squadron, 1403 and 1404, were assigned to an Air Expeditionary Force under the command of Captain Hsu Huang-sheng to fly over Japan and drop peace leaflets. The bombers were equipped with enhanced radio and radio direction finding equipment which had been co-ordinated with ground stations established along the primary and secondary routes. 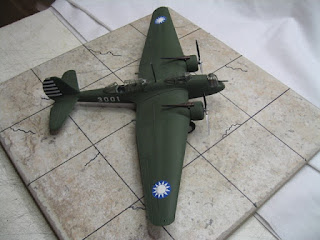 The two Martins were on stand by for the mission at their Hankow base from 15 May awaiting suitable weather conditions. At 1523 hrs on 19 May the two aircraft, piloted by Captain Hsu and 1Lt Tung Yen-po (the executive officer of the 8th Air Group's 19th Squadron), departed on the first stage of the mission, flying to Ningpo via Nanchang and Chuchow. They landed there at 1755 hrs and after final preparations and refuelling took off for Japan at 2348 hrs. After dodging the searchlights of Japanese warships the Martins arrived over the fully lit city of Nagasaki at 0245 hrs and from an altitude of 11,500 ft first dropped a flare which triggered an immediate blackout and then scattered leaflets.  They then flew on to Fukuoka where from 0325 hrs they began dropping more flares and leaflets. At 0332 hrs they started for home. 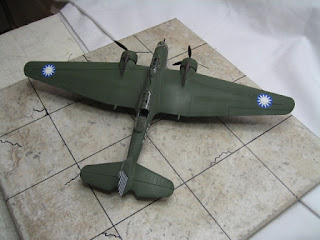 On the return journey the two bombers encountered bad weather and became separated in cloud but were able to find their way to the Chinese coast by means of continuous radio communications with the ground stations and each other. Both aircraft made landfall at Sanmen Wan at 0712 hrs coming under fire from Japanese ships anchored in the bay, the first hostile fire they had encountered on the mission. Martin 1404 finally landed intact at Yushan airfield at 0848 hrs  and at 0924 hrs 1403 landed at Nanchang. After refuelling the bombers flew on to Hankow, rendezvoused over the city at 1113 hrs and both landed there safely.

More on Chinese bombers and bomber operations in due course.