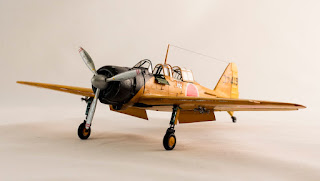 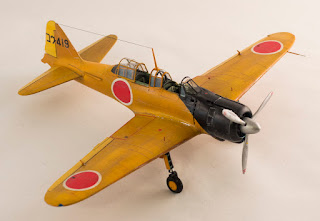 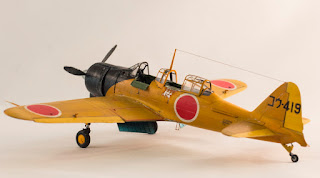 Alexey enhanced the model using an Eduard 'Big Ed' photo-etch detail set for the cockpit, flaps and undercarriage. He also replaced the kit wheels with aftermarket wheels and tyres from Equipage. 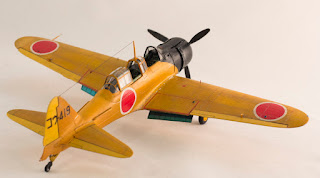 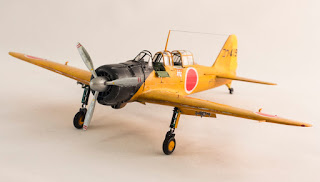 Rivet lines and the dimpling of panels were also added. It was Alexey's first attempt at the latter technique and he found the process very time consuming and boring! 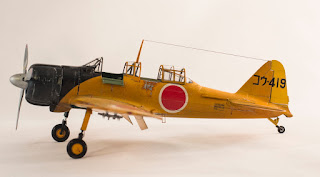 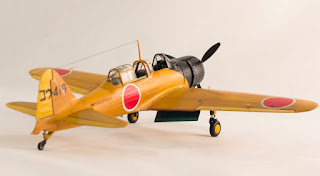 Some improvements were fabricated by Alexey himself. The cowling flaps were replaced with flaps made from the metal of a beer can and the exhausts from brass tubing. The build report (in Russian but with many images) can be found here. Additional images of the model can be seen here. 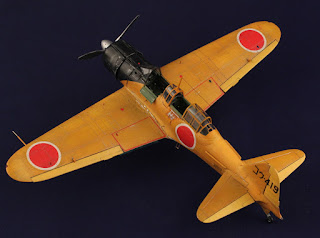 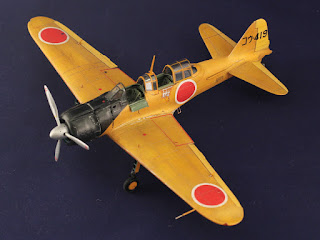 The model was painted in three stages. First an orange colour was applied, then a more lemon yellow and finally lightened variants of both colours were applied in an irreular manner. The paints used were acrylics - Tamiya and Gunze (GSI Creos). Alexey also weathered the finish to give the impression of an aircraft in service. The kit decals were used to represent a trainer of the Kônoike Ku in the autumn of 1944 with the tailcode コウ (Kou) -419. 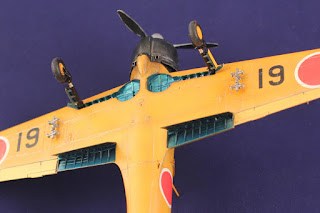 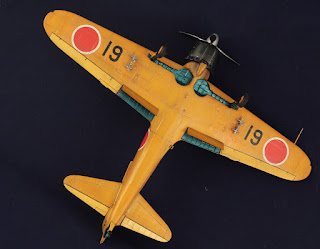 The Kônoike Kokutai was established at Kônoike in Ibaraki Prefecture in February 1944 with a complement of A6M2 and A6M2-K aircraft to train fighter pilots, but also operated the Raiden interceptor. In December 1944 the unit was incorporated into the Yatabe Ku and Konoike then became associated with the 721st Ku - the Jinrai Butai ( 神雷 部隊 - Thunder Gods Force) which in November 1944 transferred to Kônoike from Hyakurihara Air Base in Ibaraki Prefecture where it had been established at the beginning of October 1944 to fly the Ohka (桜花 - cherry blossom) rocket propelled flying bomb. The 722nd Ku Tatsumaki Butai (竜巻 部隊 - Tornado Force) was also formed at Kônoike to train pilots to replace those who died when the 721st began operations. Part of the former naval base at Kônoike is now a small memorial park - the Kashima Ohka Park - with a monument commemorating the two units and a restored Ohka displayed in one of the underground hangars.
With special thanks to Alexey Shumakov and Oleg Pegushin for sharing these images of the model.