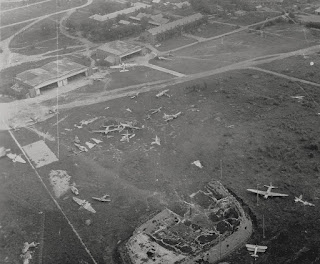 Jacob Terlouw has very kindly shared this aerial image of Lan Tien Chang airfield., presumably taken after or near the end of the war. Lan Tien Chang was just to the north-west of Peiping (Peking, Beijing), not as well known as the main airfield of Nan Yuan to the south of the city. It is now a recently re-built military airfield complex with the remnants of the old airfield slightly to the north-west of the present north-south runway. On the field several different aircraft may be seen including Ki-21 'Sally', Ki-54 'Hickory', Ki-56 'Thalia', Ki-61 'Tony' and Ki-84 'Frank' types, several of which appear to have been cannibalised. There also appears to be a serviceable L2D 'Tabby' with engine covers in place. The identity of the apparently intact biplane at the lower right of the image is more difficult - an engine less Tachikawa (Ishikawajima) KKY-1 or KKY-2 light aircraft perhaps? Suggestions on a postcard please. . . 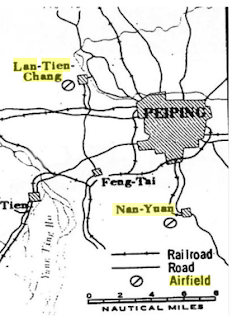 At the very end of the war Lan Tien Chang was considered to fall within the 5th Air Army sphere of command from Korea, which came directly under the General Air Army (Japan), rather than under the China Expeditionary Army. Identifying the units which operated there is difficult because detachments were being shuttled between bases in response to the exigency of the prevailing military situation and the whole was underpinned by the military transport system and other command level ancillary services. Airfields in North China were being used as rear echelon bases for units in Korea as well as training fields.  All air units north of the Lunghai Railway in China supposedly came under the command of 5th Air Army, but the situation was chaotic and Allied sweeps were attacking the airfields around Shanghai where the 13th Air Division was concentrating forces in expectation of an Allied invasion attempt.
Units transferred from the China Expeditionary Army to 5th Air Army  included the 1st Air Brigade consisting of the 22nd, 25th and 85th Sentai, by that time all equipped with the Ki-84, the 8th Air Brigade consisting of the 16th and 90th Sentai with Ki-48 'Lily', and the 2nd Air Brigade consisting of the 6th (Ki-51 'Sonia), 44th (Ki-36 'Ida' and Ki-51 'Sonia') and 82nd Sentai (Ki-46 'Dinah'). It is possible that some elements from any of these units were at the Peiping airfields at the end of the war but the 25th Sentai was based at Nan Yuan from May to June 1945 and the 9th Sentai (Ki-44 'Tojo' and Ki-84 'Frank') had also been based there from March to May 1945.
After the command changes the furthest northern reach of 13th Air Division's central China control sphere was supposed to be Licheng airfield, which is now Jinan (Tsinan) Yaoqiang International Airport, where the 85th Sentai was transferred in May 1945 before moving to Korea. All of the 'Sagikake' (先 駆け · 魁 - "charging ahead of others") special attack units (each of six aircraft) being concentrated around Shanghai came under 13th Air Division control. They included Ki-44 'Tojo' (Sakigake 1st Hikotai "Spearhead"), Ki-84 'Frank' (2nd Hikotai) and Ki-43 'Oscar' units (11th, 12th & 133rd Hikotai), all formed and training under the auspices of the 9th Sentai which was at Nanking.

With special thanks to Jacob for sharing the photograph here.

Thanks for posting this one, Nick.