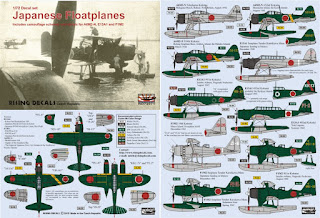 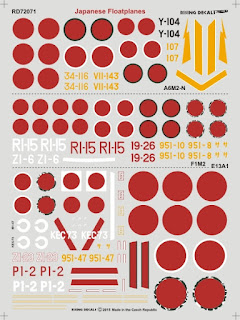 The set offers decals for the following subjects:-
Good 'Rufe' and 'Pete' kits are intermittently available from Hasegawa (1994) and Fujimi (1997) respectively whilst the Hasegawa 'Jake', although a veteran from 1971, can still be made into a good looking model with a little work. The two 1941 'Pete' subjects both have the earlier 'clean' cowling without the intake between the machine gun troughs and Rising note that a future resin conversion set will be released for that. This set is highly recommended for all IJN floatplane buffs.

Rising have also released five new accessory sets, four being photo-etched and one in resin. As usual each set comes with colour instructions, assembly sketches and relevant decal sheets for the attractively presented subject. 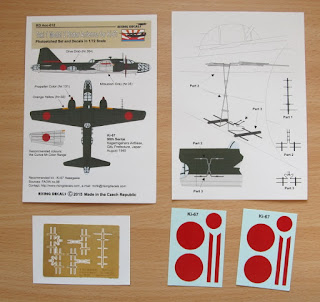 RD Acc-012 (above) is a Taki 1 Model 2 radar antennae set for the Ki-67 'Peggy'. This photo-etched set consists of wing and fuselage mounted aerial antennae for a Ki-67 of the 98th Sentai at Kagamigahara airfield in 1945. Decals consist of the Hinomaru and red tail stripe. The set is intended to be used with the Hasegawa Ki-67 (1999) but could as easily be adapted for the elderly but less expensive LS/Arii kit, of which more anon. 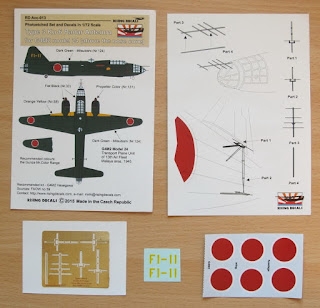 RD Acc-013 (above) is a Type 3 Ku-6 radar antennae set for mounting above the nose cone and on the fuselage sides of a G4M2 model 24 'Betty'. Decals, which include Hinomaru, are provided for an interesting subject from the Transport Plane Unit of the 13th Air Fleet in the Malaya area, 1945, with the yellow tailcode F1-11. 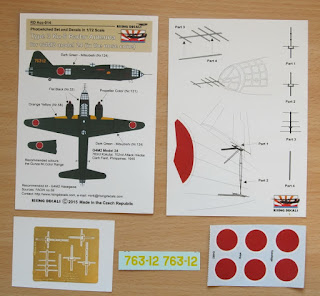 RD Acc-014 (above) is another Type 3 Ku-6 radar antennae set, this time for mounting centrally in the nose cone and on the fuselage sides of a G4M2 model 24 'Betty'. Decals are provided for a 'Betty' from the 763rd Ku at Clark Field in the Philippines, 1945, with the yellow tailcode 763-12. 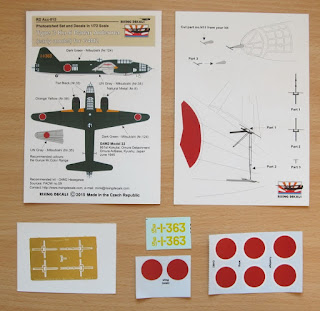 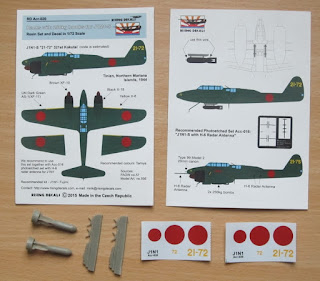 RD Acc-020 is a resin accessory set providing two 250kg bombs and their racks for a J1N1-S night intruder of the 321st Ku at Tinian in 1944 with the speculative yellow tailcode 21-72. The instructions note that it is recommended this set be used with the previous accessory set RD Acc-016 with H-6 radar antennae (shown below), currently out of stock but which will hopefully be re-released.  The set is intended to be used with the Fujimi J1N1 (1994). 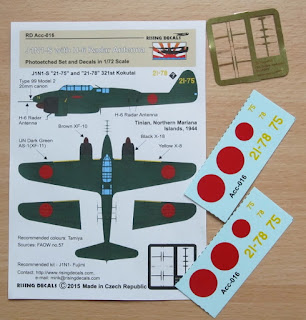 These are interesting and well chosen accessory sets offering everything needed for good alternative subjects for 'Peggy', 'Betty' and 'Irving' kits. With special thanks to Mirek of Rising Decals for kindly providing review samples of the decal sheet and accessory sets.

Thank you for posting this. I almost missed out on getting one.

Love the float plane decals! Any word if we'll ever see a modern Aichi E13A kit in 1/72? The 40+ year old Hasegawa kit is really starting to show it's age - I'm hoping Sword will continue it's run of revamped Japanese aircraft and tackle this one...

Thanks for posting these notices, Nick.