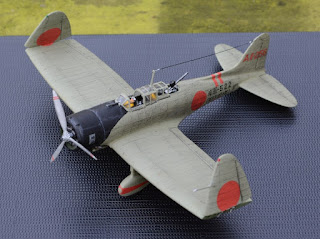 Jan Voorbij from the Netherlands has very kindly shared these images and build report of his delightful Aichi D3A1 'Val' model in 1/72nd scale.  The model was built from the latest release of the venerable 51 year old Airfix kit. Aviation of Japan readers will know that this kit, so often maligned elsewhere, is always welcome here. I can remember when it first appeared too, and how much appreciated it was in an era when so few kits of Japanese aircraft were available. "Eye-key Dai-Val' we called it then, in our ignorance. It is rightly a classic, to be built and enjoyed without qualms. 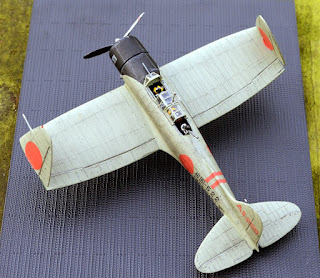 "I first built this kit when I was a 12 year old youngster, attracted by the box art, and revisited it now, at the age of 62 - how times flies. . . It was originally released in 1965 and this one is a rebox from 2011 with new, very good decals. I chose it this time for a project that I had started about the air war over the Dutch East Indies in early 1942. 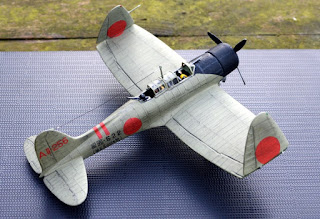 "F1/c Yamakawa’s Type 99 is seen here in standard Kaga markings and early war finish. This aircraft was a presentation machine as shown by the inscription on the rear fuselage superimposed over the twin red stripes. This reads 'Hokoku  522 (Dai55 Zen Nippon G)' denoting that it was the 522nd aircraft presented to the IJN and the 55th machine purchased by nationwide subscription. In this particular case the aeroplane was purchased by student donations from girls’ schools throughout Japan. 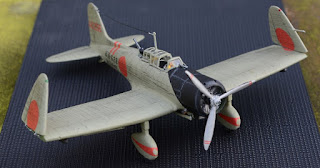 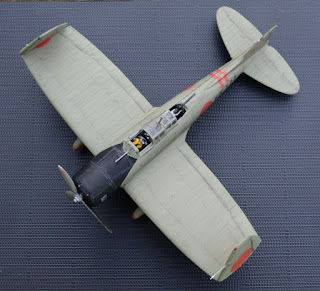 "Yamakawa flew this aircraft from Pearl Harbor through to the anti-shipping sweep south of Java in March 1942. All presentation weapons, including aircraft, for the IJN were referred to as hokoku, (Ed: 報國) while those for the Imperial Army were called aikoku (Ed: 愛国). Both terms may be translated as ‘patriot’or ‘patriotism’, although the literal translation for hokoku is ‘service to country’, while aikoku is ‘love of country’. Yamakawa’s dive-bomber also sports a different style of flash marking seen on the wheel covers of some Kaga  aeroplanes, with the upper and lower edges converging in a straight line instead of a curve. The difference between the two styles probably reflects separate maintenance buntai assignments for the aircraft. Finally, note the white stencilling block on the side of the engine cowling. This served as a handily placed checklist for Type 99 engine maintenance personnel.

"I decided to experiment with a different approach: instead of building the kit according to the instructions I wanted it to show that it was a carrier borne aircraft with its wing tips folded. This took a lot of precise measuring and sawing; a tricky job indeed. The Hinomaru decals had to be cut in two, as they were positioned across the fold. I used reference pics to imitate the construction of the wingtips and how they were attached to the wings showing some tubes (bars?) in the mechanism that moved them up or down. A problem that I could not solve to my satisfaction was the canopies. I wanted to display them open, so that the personnel and the scratched interior would be visible. For the gunner's position this meant that the rear parts of the canopy should be placed on top of each other. However, like most of the 1960s Airfix kits, the transparencies are too thickly moulded so this was nor feasible. Therefore I decided to leave the rear part off as it isn't noticed if one doesn't look too closely ;-) 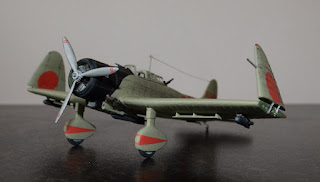 "The kit went well together and there was not much putty needed to fill the gaps. I added two small bombs from the spares box to the wings. For the overall paintjob I decided to choose Tamya XF-76 IJN Grey Green (instead of Humbrol 90 Beige Green the Airfix recommendation). To add weathering I used a dark grey wash and conté pencils. A HB pencil was used to lighten up the rivets. 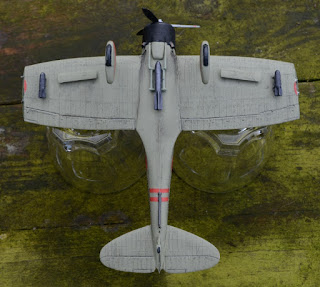 "There is one other omission - there are no small decals with the number '256' that should be displayed on the front of the wheel spats. All in all, despite some shortcomings, this is a kit I would like to recommend and I very much enjoyed building it."
Jan Voorbij
References:

With special thanks to Jan for sharing the images of his model and build report here. Incidentally, the subject of Jan's model is featured as Profile 9, painted by Jim Laurier, in Osamu Tagaya's superb Osprey book on Kanbaku units.

Nice job, Jan! This was one of the kits (and box paintings) that got me really interested in Japanese subjects. Thanks for sharing your work with us.