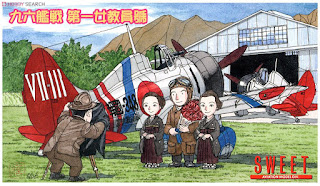 Following talk of forthcoming Fine Molds and Wingsy Mitsubishi Claude kits in 1/48 scale a hat tip to Aviation of Japan's Texas correspondent Mark Smith for highlighting the Sweet range of A5M4 kits in 1/144th scale with a review of the most recent to appear. As they used to say - Have you got them all yet?


"It had been too long since we had seen a new-tool aircraft in 1/144 from Sweet, but the recent appearance of their A5M4 Claude series has proven that this company remains unsurpassed for kits in this scale.  Following their usual ‘2 kits in a box’ format with decals by Cartograf, it debuted with a double kit for Chitose Fighter Group (below), which included some special markings I’d never noticed elsewhere. And in a particularly evil touch,  one of the kits is molded in clear.  It’s beautiful on the sprue but after trying to build one of their little Hurricanes molded in clear, I would leave it there! 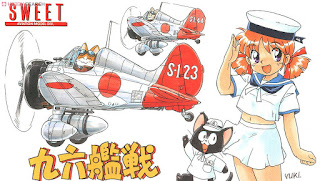 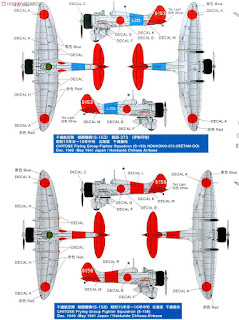 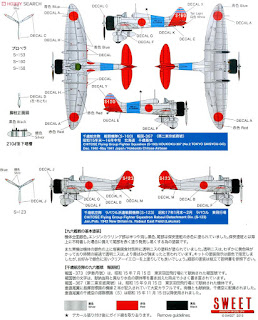 "This was followed by  'Sweet Decal' No.38  (one bagged kit only) 'Type 96 Carrier Fighter (A5M4) 12th Flying Group' featuring 3-107 flown by the famous IJN ace Saburo Sakai as a young pilot in China. I sense it was a sentimental choice, and an appropriate one for many who read this blog and might have first became aware of the Claude via the photo of this machine in Sakai’s Samurai. 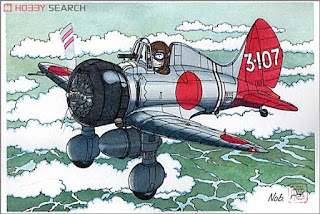 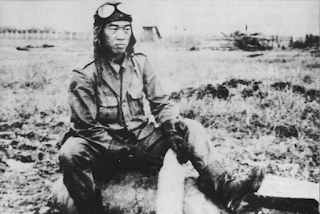 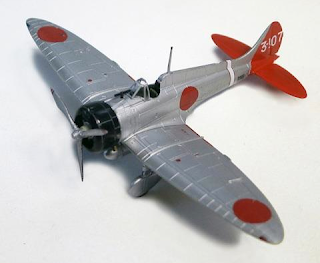 I was waiting, however, for the real clothes-horses flown by Soryu pilots in the days just prior to the Zero’s introduction, and with their two most recent releases, Sweet has not disappointed. The kit for “Soryu Fighter Group 1938-39” offers markings for the iconic W-101, 102, and 103 trio piloted by  Tamotsu Yokoyama, Matsuo Hakiri, and Hideo Oishi. But its other choice, W-121, may be the prettiest.  Sweet notes on the color marking guide that that latter is in ‘Air Battle Drill Specialty Paint.’  Having always assumed that the broad red, blue, and white diagonal stripes on these A5M4s denoted either a leader or a section/detachment within a larger unit, this comment makes me wonder if instead they might have indicated ‘teams’ taking part in the drill or exercise.  If anyone knows a bit more about these maneuvers and those who took part, the information would be appreciated. 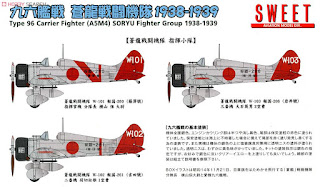 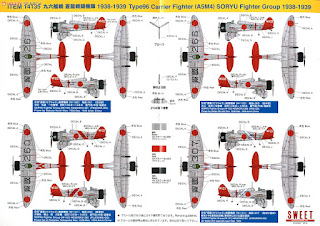 "And the boxing released in March, titled 'Houkoku-348 [1st Woman Teacher-GO]' (heading image) features probably the most colorful Claudes flown by the IJN, when a small detachment from Soryu was based at Kasonahara in early 1941.  The presentation aircraft featured is VII-111 and was apparently donated either by or in honor of a school staffed by female faculty.  Another that rivals it for color is Houkoku-386 / VII-119, donated by Fukui Textile; its white sashes on fuselage and wings have in the past been illustrated with fine blue piping, but Sweet depicts them in red.  This boxing also includes markings for Group Leader (W-109) and Squadron Leader (W-107) birds from Soryu in late 1940. 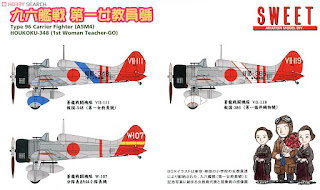 "As usual Sweet has done their homework, created a tiny masterpiece, and given the modeler and collector many choices of markings with superbly printed decals. While the art speaks for itself.  The sprues are frankly too small for my camera to properly appreciate, but trust me, these moldings are simply exquisite and capture many subtle details in very few parts. And everything fits. Sure, they’re tiny, but wouldn’t you rather have two Godiva chocolate truffles than a king size Hershey Bar?  Sweet."

Special thanks to Mark for sharing his thoughts and images of the Sweet A5M4 kits.

Thanks for the great review. Can't wait for the Fine Molds A5M4 kit, just may have to grab some of these smaller scale gems, too.

These really are exquisite kits. Our cat thought so too as he effortlessly mangled one I'd just assembled. Good thing there are two in the box. : )

Thanks for this news, Nick.