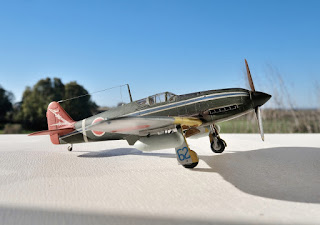 Danilo Renzulli has very kindly shared these images and details of his impressive build of the RS Models Ki-61-I Tei Hien in 1/72 scale, looking splendid in the Italian winter sunshine. The model represents c/n 5262 of Hiko Dai 244 Sentai, assigned to Sentai Leader Capt Teruhiko Kobayashi as a reserve aircraft after he was wounded on 12 April 1945 and as illustrated by Ronnie Olsthorn in Osprey's 'Ki-61and Ki-100 Aces' (2015). 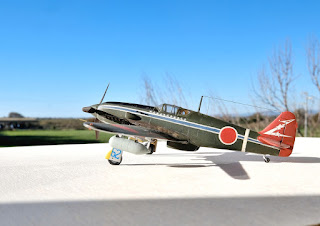 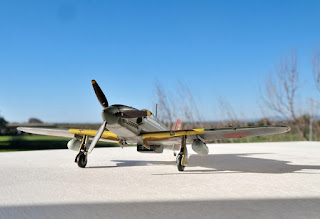 Danilo reports that progress on this Ki-61 project remained 'trapped' by long interruptions due to his home move and was plagued by painting issues related to inconsistencies in paint quality - with Humbrol no longer the paint he was used to for a lifetime. It is true that long gone are the days when a single, smooth and  opaque coat of Humbrol enamel paint could be applied by brush straight from the tin and they call this progress! He found it compulsory to use a primer to avoid unwanted extensive chipping. 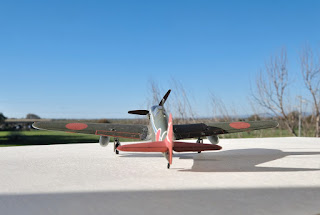 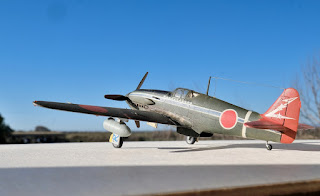 The model was enhanced with some Eduard photo-etched parts for the cockpit and the use of Albion Alloys 0.3 mm and 0.5 mm telescopic tubes to make up the pitot tube. Danilo added extra detail to the undercarriage components with photo-etched links and wire brake lines, whilst the landing gear down indicators and drop tank connections were also added using metal wire. Navigation lights were added by drilling holes into the wingtips and vertical tail then adding a tiny drop of Crystal Clear. The navigation light on top of the fuselage was likewise carefully carved out in the plastic thickness and a drop of Crystal Clear added. Machine guns were replaced with Quickboost items. 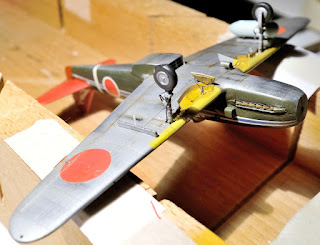 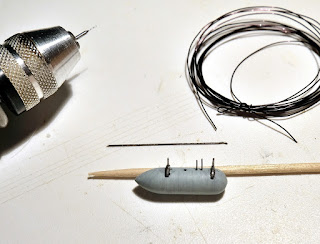 The upper surface colour scheme was mixed using Humbrol paints and the undersurface using Alclad. The blue and white fuselage stripes were painted on as were the hinomaru using masks by Maketar. Danilo found the masks useful but a challenge, requiring patience and care when locating and removing them. He also warns that they cannot be used over a model sprayed with the hairspray technique as the upper paint layer will be removed as he discovered to his expense with a Ki-84 model. The anti-slip panels were added using # 2000 wet and dry sanding sheet. 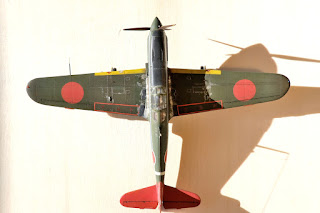 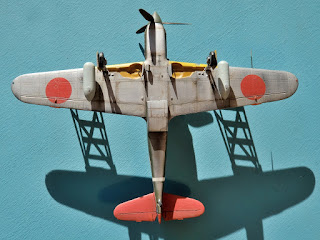 Danilo found the RS Models kit not bad and recommends it as going together well with a fit requiring no great effort and the result an accurate appearance. Nevertheless he says that he has a whole Sentai of Tamiya and Aoshima Hiens waiting their turn to show up on his workbench! 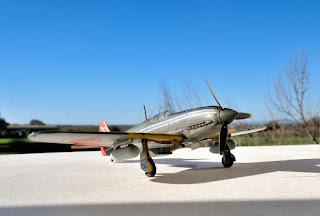 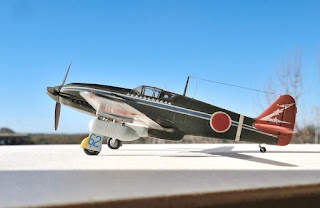 With special thanks to Danilo for sharing the images of his splendid Hien model with Aviation of Japan and providing the details of his build.

Great work, Danilo. Thanks to you & Nick for sharing.

Splendid work! Danilo's model is entirely correct. My profile illustration in the Osprey book has the blue stripe superimposed on the white combat stripe, which is incorrect and I later corrected it but the book had long gone to print by then.

More importantly, many times this machine has been shown without the blue stripe in the middle, completely ignoring the fact it already had a blue stripe before the white borders were added. Some authors have suggested the blue stripe was overpainted, but that simply makes no sense at all.

What a nice build. Those painted on hinomarus certainly look good, but I don't know that I have the patience to position those masks correctly. Well done Danilo!

Superb model with a very good rendition of #7 olive-brown. I particularly like Danilo's description of his detailing materials. I immediately caught on the idea of using 2000 grade sanding paper for the anti-slip areas. I honestly think it is a bit too thick for 1/72 but may work very well in my preferred 1/48.
Great work - Thanks Danilo and Nick.

This is just to thank you all for your kind comments. It always is a pleasure to share the final result of my efforts with the friends of this site. I wish everybody a happy and prosperous 2020.