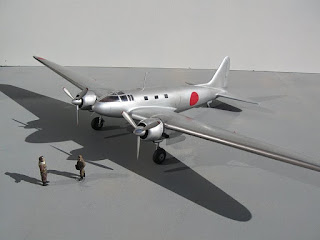 This first hand account by Dr Hidemasa Kimura (1904-1986) of the development and flight of the Tachikawa Ki-77 under the project designation A-26, appeared as part of the 'Now It Can Be Told' series in the February 1964 issue of Flying Review International magazine. It is too interesting to remain buried in an old magazine and is therefore presented here in its entirety. The A-26 designation represented 'A' for the Asahi Shimbun newspaper which had first sponsored a non-stop Tokyo to New York flight and '26' for the Japanese Imperial year (Kōki - 皇紀) 2600 for 1940. The A-26/Ki-77 featured here in May 2014 as a superbly scratch-built model in 1/48 scale by John Haas (heading image) and was also the second kit as FSM-002 produced by the late Horatio Hernández in his Friendship Scale Models enterprise as featured here, here and here. The mysterious fate of the second prototype, lost on an inaugural Seiko (成功 - Success) flight to Germany via Singapore on 7 July 1943 remains unresolved. In June 2001 Larry deZeng posted at j-aircraft.com the information that in the same month RAF 'Y' Service personnel had intercepted the following Ultra signal from Berlin dated 7 July 1943 to Kdo.d.Flughafenbereich 6/VI (Airfield Regional Command) at Sarabus, Crimea, which exercised authority over the entire Luftwaffe airfield infrastructure at that time:- "On 8/7 an allied aircraft will fly via air grid squares 3420, 2560 and 2510 to Sarabus. It is a two engined low wing monoplane, wing span 30 metres, metal fuselage, natural colour, wings grey. The aircraft must not be fired on under any circumstances." The Ultra signals intelligence analyst at Bletchley Park had added the following note:- "This presumably refers to undertaking 'GOA' in which an aircraft was flying to Sarabus from Tokio (sic) via Singapore". Ultra Signal CX/MSS 2867/T8). According to Deniz Karacay also posting at j-aircraft.com the first (non-scheduled?) non-stop flight from New York to Tokyo was by Boeing 747SP in November 1975 with Dr Kimura as passenger! 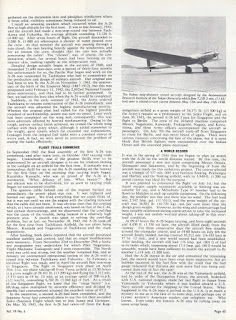 Great posting ! ...such a interesting and arresting story...and very cool that KImura-san finally made the flight in 1975 !

Thanks for sharing this Nick - personally, maybe the most interesting one yet. The ground-level shot has the same general look of the later Dinah aircraft, if a bit stretched in all axes! I'm always on board for these early articles.

What a great story, and you're so right, too good to lie buried.

Dr Kimura also contributed to research into tailless aircraft. If you have not done a post on those projects I hope you do one in the near future.

Thanks for sharing Nick! One of Japan's prettiest aircraft designs, I think. Great model by John.