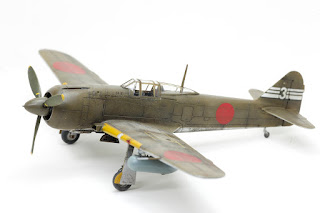 In an appropriate follow-up to the last blog Francesco Borraccino has kindly shared these images of another of his excellent models, this time the Kawasaki Ki-100-II crafted from the 1/72 Aoshima kit. The Aoshima Ki-61/Ki-100 series has attracted criticism for the slightly slab-sided shape of the rear fuselage but nevertheless the appearance and 'sit' of Francesco's model are very convincing and there is a great deal to appreciate. 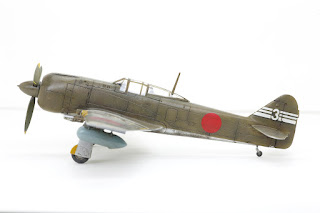 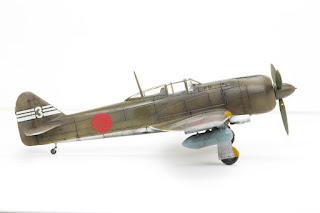 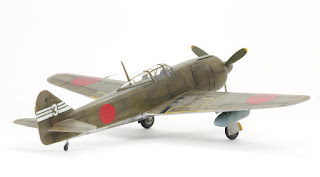 The model was built from the box with just the addition of lead wire for the undercarriage hydraulic lines and the use of Dead Design masks. Francesco judged it as not a bad kit but the build was challenging and needed careful dry fitting and testing throughout for almost all the parts. He found the separate wing leading edge gun panels a poor fit and their muzzle apertures oversized. 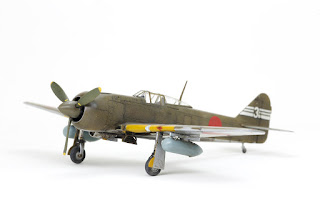 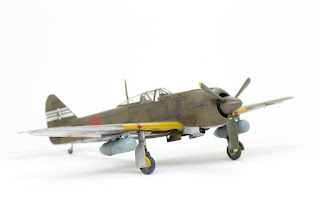 The instruction sheet, especially the markings indications, gave him the most headaches and he found that:- 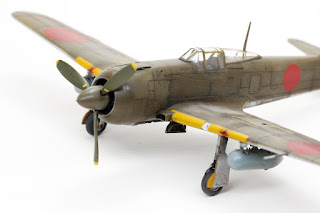 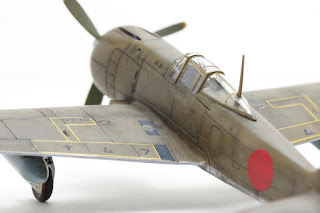 Francesco devised his own mix by eye for the upper surface colour using AK Interactive RC330 (Ohryoku Nana Go Shoku), Tamiya XF-51 Khaki Drab, XF-52 Flat Earth and XF 90 Red Brown (a new colour for German WW2 armour which he found to be more olive than brown!). The undersurface was finished with Tamiya AS-12 Bare Metal spray, with some panels finished with AK Interactive Xtreme Metal Polished Aluminium and Dark Aluminium. The propeller blades were a mix of Tamiya XF-62 Olive Drab and XF-65 Field Grey, whilst the drop tanks were a mix of XF-19 Sky Grey and XF-23 Light Blue. The kit decals were used and Francesco found them strong and matt, a little thick but better than Hasegawa or Academy. 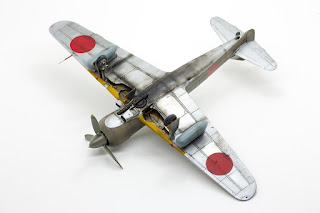 Francesco freely admits that he made mistakes in the build, such as attaching the drop tank racks to the gun ejection slots after fixing the undercarriage with CA glue, but the instructions were no help with the attachment location unclear and no locating points on the parts. He attempted to rectify the damage but mindful of not wishing to spoil the natural metal finish or to break the undercarriage legs he opted to conceal it with a rather over zealous application of gun staining - which does not appear in photographs. However the heavy exhaust stains from the turbosupercharger were replicated from a photograph of the real aircraft. 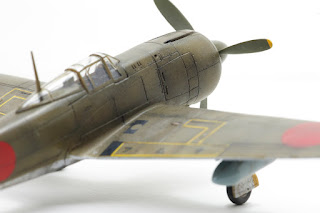 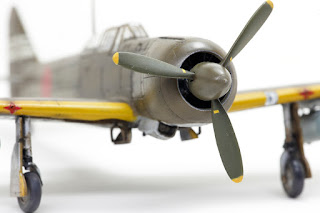 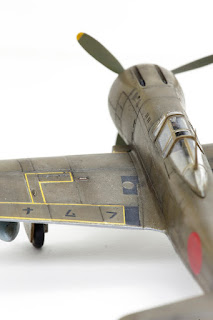 The Ki-100-II represented the final development of the fighter design that began life as the Ki-61, with the basic hybrid design of the Ki-100 fitted with a turbosupercharged engine to improve performance at altitude. Three prototypes had been built at the Kawasaki Gifu plant (where much experimental work was conducted) and were flight tested successfully from the adjacent Kagamigahara IJAAF airfield (the airfield was directly accessible from the Kawasaki flight engineering workshops) but plans to begin production in September 1945 (by both Kawasaki and Nakajima) were thwarted by the end of the war. Francesco's model represents the third prototype, found intact at Gifu but sadly not preserved.

With very special thanks to Francesco for sharing these images of his beautifully realised model.

Nice build! And nice recovery on the drop tank mistake. As you said Nick, very appropriate after your earlier post.

Thanks for sharing, Francesco & Nick.

Beautiful model of a beautiful aircraft! Thanks for sharing it here with us....

Well done, Francesco. I really like the subtle topside finish on this one. Thanks, Nick,