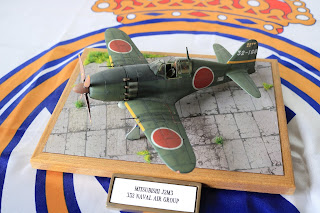 The excellent 1/48 scale Japanese aircraft models of David Walker have graced the Aviation of Japan blog before, with his superb Kawanishi N1K2-J Shiden-kai showcased in November 2009 and his fine Nakajima Ki-84 Hayate 'Frank' featured in September 2017. Both models give the appearance of being to a larger scale and his Raiden model, showcased here, is no exception. 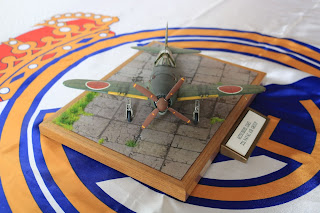 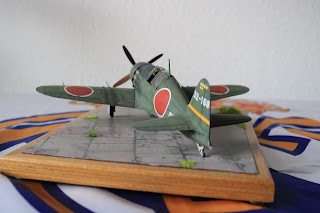 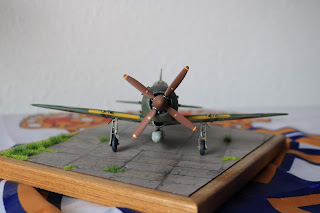 David's model was built from the 1/48 scale Hasegawa Mitsubishi J2M3 kit, # 09667, first released in 1996. David observes that this kit is similar to many Japanese WW2 kits made by Hasegawa,  generally presenting excellent surface detail, a good tight fit and clear and easy assembly. The photos of the model were taken by David's friend Kevin McCue of Galashiels. David described his build as follows:-

"This model has the AeroMaster Empire Defenders Part 4 aftermarket decals for The 332nd Naval Air Group based at the Naruo Air base in Japan, 1945. I also fitted the extremely rare (and out of production) Moskit exhausts, Air Master 20mm cannon barrels, together with three photo-etched detail sets - Eduard FE117 and 48-201 which are designed for the Raiden (both sets provide important items that the other does not!) with one from the N1K2-J for added handles and switches not contained in those sets, and a Squadron vac form canopy, plus  a Fukuya Pitot Tube.  I also used the ring and bead sight from the N1K2-J etch set fitted to the Hasegawa gun sight part N4 – the existence of this gun sight is not mentioned  by the Eduard etch sets! 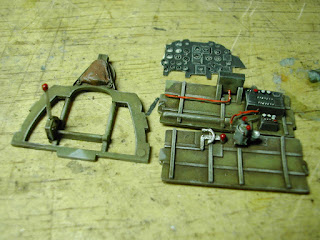 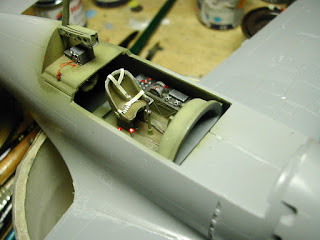 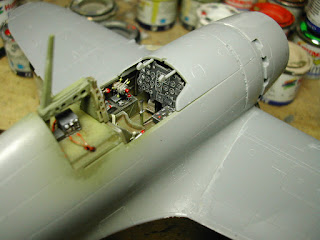 "As I had obtained a large number of detailed Raiden cockpit photos and drawings from Japanese aviation magazines from a j-aircraft forum expert  I was able to use those to add a scratch-built radio set and fine brass wiring on the shelf behind the pilots seat so the model was as accurate as I could make it. 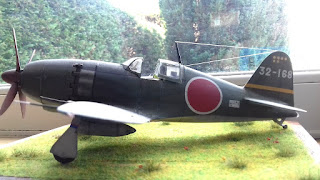 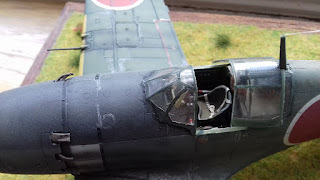 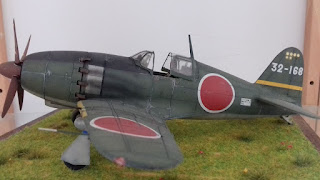 "The model was fitted with the alternative high-performance propeller and I used modelling putty to represent the leather head rest which is not provided in the Hasegawa kit. All these additions made a huge difference to the look of the Raiden model and overall I am delighted with it as completed."

And so David should be with such a beautifully presented and imposing model! With very special thanks to David for sharing these images and for his patience in waiting for them to be posted!

Nice weathering. The excellent details for the cockpit interior. Thanks for sharing.

Beautifully done model, and a great kit as well. Would like to build another someday (built one when brand new almost 25 years ago, yikes!!!). Thanks for sharing!

I feel till that up till the early 2000's - 1/48 Hasegawa kits were one of the best in the world , it just is sad that they seem to have gone down the route of re-boxes with new decals and very few new kits - and seem to have stagnated .

Another fine model, David. This kit, by today's standards, is remarkably simple yet builds a very faithful replica. Nice job throughout, especially in the cockpit and the finish.

I agree that Hasegawa's 'golden days' of issuing new tool aircraft models in 1/48 seem well and truly over; the E8N Dave was the first Japanese subject in many years, and remains the most recent. I'm still mystified that Tamiya and Hasegawa have for years ignored fascinating subjects of their own country's aviation heritage such as the Aichi Type 0 Jake floatplane and the Ki-46-II Type 100 Dinah (more -IIs were built than the later -III version Tamiya kitted twenty years ago, which itself could use replacement in the same way their venerable Zero kits were supplanted by cutting edge molds for the Type 22 and 52). For that matter, the A6M2 Model 21, perhaps the most iconic Zero, still awaits a 1/48 mold of the same quality; Hasegawa's 1996 release is still the best out there, surpassing Tamiya's circa-1979 mold which is still in the company's catalogue.

All these airplanes were produced in notable numbers, superbly designed, visually fascinating, and fulfilled vital tasks that make them of significant historical interest. Three years ago I would have included Claude and Sonia on The Missing List, but it's taken a new company to bring us these airplanes in 1/48, and terrific they are; the track record of the last twenty years indicates that it's more likely now to see an E13A1 Jake and a Ki-46-II Dinah from Wingsy (go, Wingsy!) than from Hasegawa or Tamiya.

Beautiful work! Very nice base too!

Thank you Ronnie !
I also forgot to say that the runway diorama that I used was the 1/48 Diorama Scenic 3D Display Groundwork "Old Concrete" Sheet - Manufactured by: Uschi

The grass is ' green-line ' grass , and is really effective at giving a realistic effect with different lengths of ' grass ' - highly recommended for a diorama - especially to make it look ' real ' .

Nice work, David. Thanks for sharing.