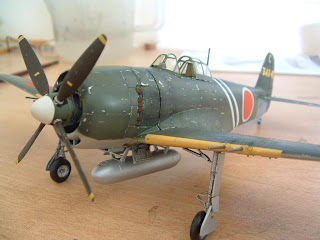 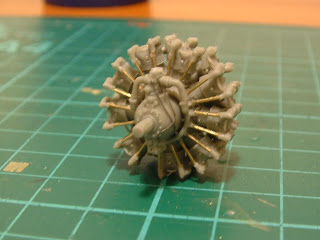 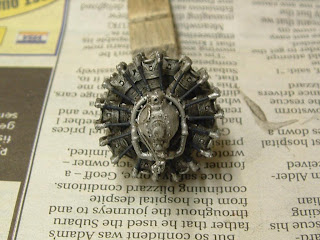 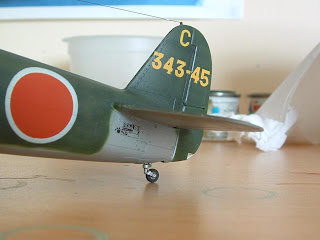 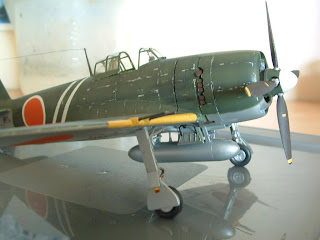 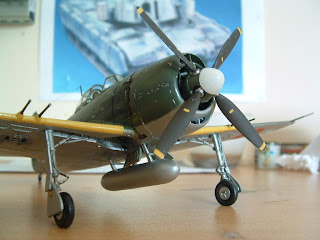 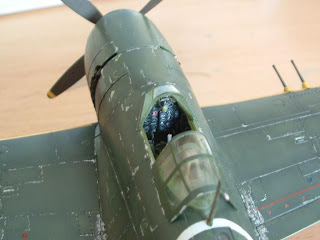 When I first saw these beautiful pictures kindly contributed by David Walker I assumed this was a very large scale model - possibly the Doyusha 1/32nd scale kit to which he had done wonderful things. I was amazed to discover that it is in fact the Hasegawa 1/48th kit.
David described the build as follows:-
"This was painted using the Aztek airbrush as an aircraft of the 343rd Kokutai (Naval Air Group) flown by Lt Takashi Oshibuchi ( six kills ). His aircraft has been wrongly depicted as having 2 red fuselage stripes and is incorrectly shown in the Hasegawa kit artwork and also in the kit instructions (always re-check your sources). In fact the aircraft had white stripes!
It is notable for the Montex masks for the national insignia and unit markings which were used instead of the kit decals - and can then be weathered over - try doing that to a decal. The Eduard photo-etch set was used and also a new item - Fukuya brass barrels for the 20mm cannon and pitot tube. The kit engine was replaced with a Vector resin engine (made in Russia) - and available from Parade Figures in the UK . This was built as a kit in its own right, replacing the single kit part which looks like a blob. This replacement engine is so much more detailed and realistic in appearance and it also has individual push rods made from brass. The guns and pitot tube (if you can see from the pics) have hollow ends, and another benefit is that everything is very strong as its all brass."
Lt Takashi Oshibuchi was the leader of Hikotai (Squadron) 701 'Ishin-Tai' within the 343rd Ku and was reported as missing in action in this aircraft on 24th July 1945.
A superb looking model and thank you, David, for sharing it with us.
Image credit: Photographs ©2009 David Walker
Posted by Straggler 脱走兵 at 12:11

Great looking Shiden David! Your engine really looks good. I enjoyed building this kit so much, that when I finished mine, I immediately bought another (so I could do the next one "right"). For anyone who hasn't built this kit, get one. You won't be disappointed. It just falls together, and looks great right out-of-the-box. You can see mine on my blog www.PacificAirWar.com. I'm currently building a Platz 1/144 Shiden Kai.

Such a beautiful model! Thank you for sharing it here, Nick. David, I was curious where you found the info that showed the correct color for the stripes, and if any photos of this plane have come to light. There are so few decent images of 343rd airplanes, and those taken after the war usually seen to have the codes painted out. That well-known shot of all those removed propellers from Shidens on the floor of the hangar - weren't those 343rd airplanes? If so, to judge by the prop spinners, they had some colorful birds we don't know about anymore.

Also, when I have played with this kit and dry-fit the parts, I remember struggling with getting the wing root area to fit well. Sometimes this changes when the cockpit parts are fitted, so that answer might be "get off your tail and build it," but let me know if there is a trick here. Anyway, your model is inspiring!

David, I was curious where you found the info that showed the correct color for the stripes

thanks for your kind comments -
attention to detail is no accident !