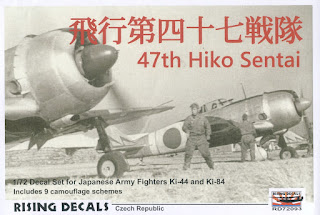 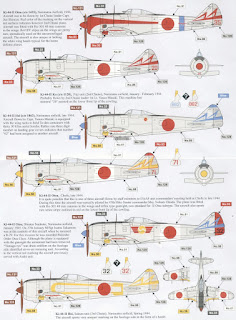 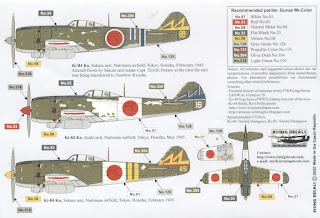 The individual subjects are as follows:- 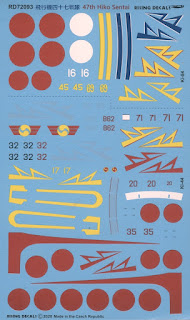 A splendidly colourful sheet of markings to suit the Hasegawa or Sword Ki-44 and Ki-84 kits in 1/72 scale. The convention for the hikotai colour sequence of this unit is usually blue (1st Asahi ), red (2nd Fuji) and yellow (3rd Sakura). but some references depict aircraft with white insignia bordered in blue, whilst HIS* states the sequence as white, red and yellow. Unfortunately the tonal appearance of the markings of aircraft in photos with their attributed squadron identity are sometimes inconsistent. Tonal interpretation is fraught with uncertainty and it might be that very dark blues, very faded blues and/or distinctly orange or faded reds were being photographed. Then there is the pundit's delight of film type and filters! Fortunately the provision of the tail insignia in this set should allow modellers to make changes to suit their own preferences or favourite gurus. 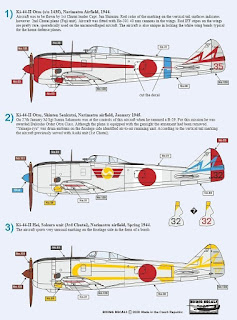 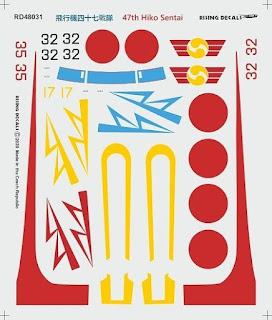 RD48031 (shown above) appears to be a similar sheet in 1/48 scale with a reduced number of identical Ki-44 subjects as shown, but to be confirmed.

With special thanks to Mirek Kárník of Rising Decals for providing the review sample of RD72093.

Thanks as always for sharing these, Nick.

How would one replicate the light blue?