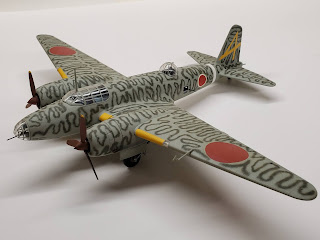 Like buses you wait ages for a Revell Ki-21 'Sally' to come along and then two arrive close together.  Fortuitously the Revell Ki-21 model that Kevin Bade has very kindly shared images of is the turreted late version so now a very fine full set of both kit options is displayed here. And Kevin's model depicts dark green snake weave camouflage applied on overall grey green to compliment rather than duplicate schemes for a perfect demonstration duo. What a splendid kit and splendid models. Let's not have a word said against it until a mainstream new mould comes along (for which we have been waiting ages!). 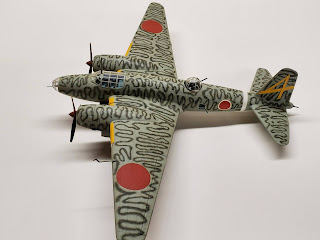 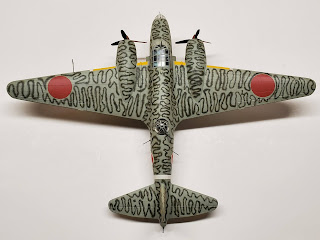 Kevin built the model about 20 years ago and recalls it fitting together 'pretty well' except for the glass. He displayed it with open bomb bay and lethal looking ordnance as shown. 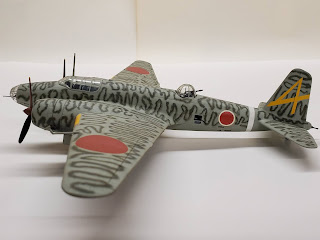 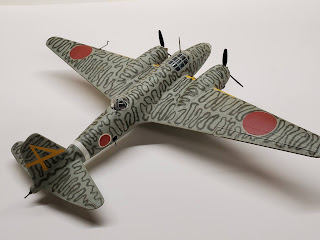 Tail insignia on Kevin's model is that of the nomadic Hiko Dai 14 Sentai which originated from the 14th Flying Rentai in August 1938 with three Chutai of heavy bombers. At the start of the Pacific War the 14th moved to Chaozhou (Chosho) on southern Taiwan with a strength of 18 Ki-21-I bombers and conducted attacks against northern Luzon in the Philippines. In late January 1942 it moved to Don Muang, Thailand to participate in the air offensive against Burma. After returning to Japan to re-equip with the Ki-21-II and increasing its strength to 27 bombers the unit moved into Burma in October 1942 and continued operations there until the end of the year. It then moved to the New Guinea theatre, flying into Rabaul by stages in March 1943. There the unit engaged in both bombing and transport sorties until November 1943 when it withdrew to Namlea and began engaging in convoy patrol and anti-submarine work around western New Guinea and the Dutch East Indies. After further anti-submarine patrol duties from the Philippines and Taiwan it reverted to night bombing sorties from the Philippines against Leyte, then from the Celebes against Morotai from October to December 1944. The unit finally returned to Japan in February 1945, slated to operate the Ki-74 but instead re-equipping with the Ki-67 Hiryu. 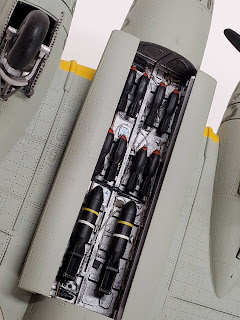 With very specials thanks to Kevin for sharing these images and for completing the presentation of a very fine duo of models made from a venerable classic of a kit.

Another great addition to the Sally & Helen saga. I especially like the interior bombay image with the added wiring and detailed painting of the ordinance. The countersink rivets are well molded and add to the machine look of this aircraft to me. Maybe someone will offer us a build of the Lily to look at soon?

Thank you Nick and Kevin.

In particular, the extra detail and fabrication of the bomb bay section are just stellar.

Indeed the Revell "Sally" is holding its own nearly 45years after its initial release...I wonder if some manufacture is noting all of this interest in such a historically significant JAAF aircraft and will begin contemplating the creation of a "new tool" version.

Love this one, too. Thanks for sharing it here with us,

Wonderful build and such great modeling! I too have wondered why we're still waiting.

Thanks for sharing Kevin & Nick.