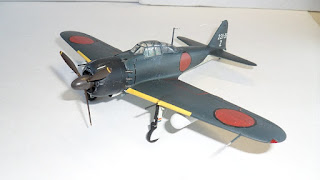 This model could not be included in the recently featured collection of John Haas' vintage Zero models due to a heavy landing accident following its sortie from his display cabinet and resulting in damage to the undercarriage and antenna. John has effected repairs and photographed it anew for Aviation of Japan. 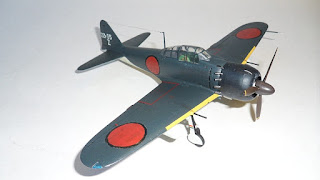 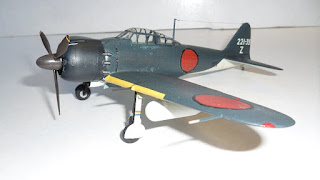 Built from the 1/48 scale Otaki A6M5c kit but modified to represent an A6M5 Otsu with wing mounted drop tanks operated by 407 Hikotai of 221 Ku, the 'Z' under the tail code denoting a fighter-bomber with central bomb rack for long range anti-shipping attack missions. The model also features over-painted white borders on the wing upper surface and fuselage hinomaru. 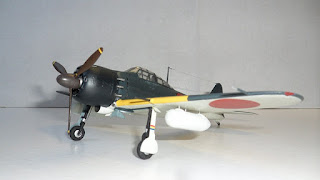 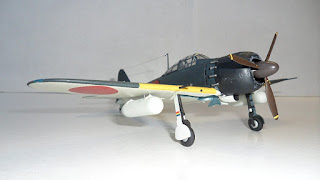 Originally released in 1971 this kit was also issued by AMT/ERTL in 1990 and was afterwards available under the Arii label with 1973 box art by Rikyu Watanabe. 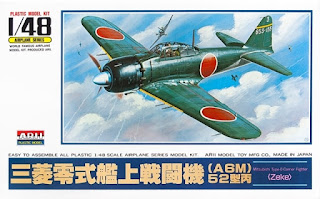 With special thanks to John for kindly sharing these images of another vintage Zero.
Image credit: All model photos © 2020 John Haas; Box art © 1991 Arii

Another fine example of a great looking vintage model!

I will remember to be careful when taxiing out of the display cabinet prior to rake off :)

Good looking model John. I remember when those Otaki kits came out and how it outshined my Monogram Zero. Their Hellcat is still one of the best offerings around. Thank you Nick for putting it on the blog!

Another fine model from the Haas stable! And a version I've hardly ever seen built. Thanks for sharing, John and Nick.

Mr. Hass, a smart looking Zero. 1971??? What an incredible kit for the time. When I found Otaki in the mid-1970s, I was amazed. Thanks for showing us your Zero.

John,no one has mentioned that Otaki molded the canopy framework on the inside! I've one of these kits underway, and it looks like you and I came to the same solution of cutting decal strips to put on the outside. The canopy is not the best fit, either, and you've done a masterful job of getting it down smoothly. Congratulations on a great build!