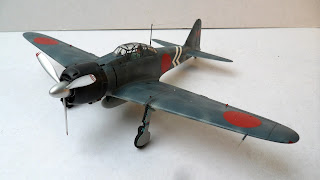 John Haas, whose several superb Japanese solid aircraft nodels built from scratch grace these pages, had his own memories of building the classic Tamiya 1/48 A6M2 kindled by Mark Smith's evocative memorial to that kit. John built several 'because it was such a splendid model in those times' and has kindly shared these images of three of his vintage Zero models. 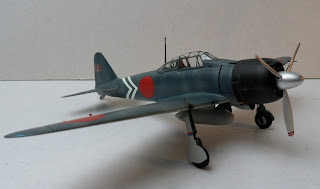 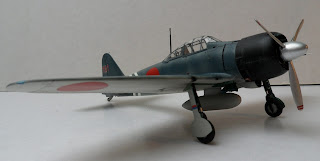 After building regular light grey versions from the Tamiya A6M2 kit, which was cheap in them there days, the A6M3 Model 22 shown above was converted from the kit with a modified cowling from an Otaki Zero. It represents a field camouflaged aircraft from 582 Ku based at Buin on Bougainville Island during 1943. In pre-internet days John used the Squadron Signal Zero in Action book for reference.  I had a false memory of a Tamiya Model 22 kit of that vintage and had hunted fruitlessly for it for hours in the stash before receiving John's email and images of his converted model, then checking to realise that my memory was playing tricks. The 'Model 22' box art that I thought I remembered was actually the A6M5c. Tamiya only released an A6M3 Model 32 in 1982 and an A6M5c in 1983. Maybe they reckoned a Model 22 could be built by combining the A6M2 and A6M3 kits thereby boosting sales! Now what could you do with a Model 32 airframe and a Model 21 cowling? 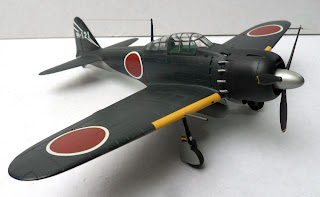 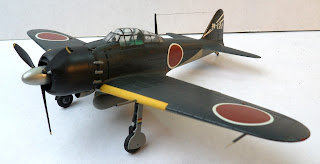 The A6M5 model shown above was built from the Otaki kit as standard but John also converted another Otaki kit to represent the A6M5c or Hei variant as shown below. 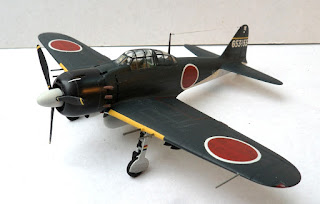 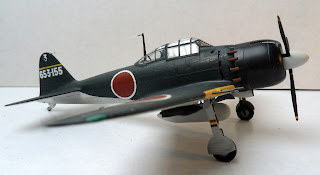 With very special thanks to John for sharing these images of his vintage Zero models.

Great classic kits! I built some of them in the 1980s too - the Tamiya A6M2 (meanwhile cannabalised) and A6M3, and a Fujimi A6M2 (which received the Tamiya cowling). It's time to restorate them as I see your nice models.

These are all really nice, but I particularly like the Model 22 and your interpretation of the camouflage. The Otaki kit seemed a big jump from the old Monogram kit, and looks great here. Thanks for sharing these, with us, Jon and Nick.

It is particularly impressive when one takes into consideration the materials available in the 1980s.

As a fellow "Vintage" modeler I can distinctly remember a time when Sudaron Signal publications along with Don Thorpe books were the only game in town.

Thanks for the memories and a really great looking set of Zero models!

A fine build, John. Thanks for sharing, John & Nick.