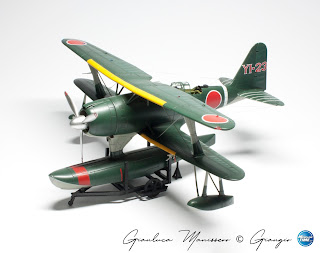 Gianluca Manissero of Italy has very kindly shared these images of his immaculately finished Mitsubishi F1M2 'Pete' Type 0 Scouting/Reconnaissance Seaplane (Rei Shiki Suijoh Kansoku-ki 零式水上偵察機 and popularly referred to as Rei-Kan零観) built from the 2009 Hasegawa kit in 1/48 scale and representing an aircraft from the seaplane carrier Chitose flown by Flyer 4/c Kiyomi Katsuki and Flyer 2/c Michiho Takarada in the Solomons during October 1942. 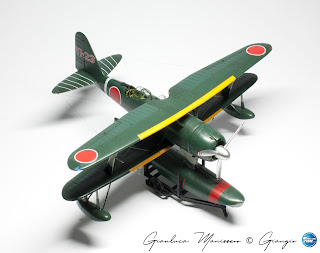 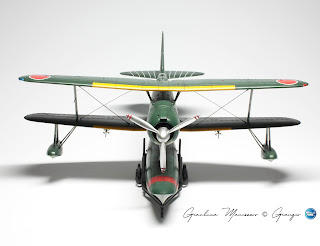 Gianluca built the model from the box but added the accessory Hasegawa photo-etch set for the kit, Quickboost exhausts and Eduard seat belts. Additional coverage of the build can be found here. 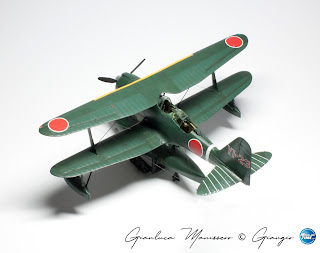 The model was painted with AK Real Color paints; RC306 Mitsubishi Interior Green for the cockpit, RC 305 IJN D2 Green Black for the upper surfaces and RC302 IJN J3 Hai-iro for the under surfaces, with those colours lightened with some drops of white for the fabric covered flying surfaces. The wing leading edge IFF strip was painted with a mix of Tamiya Yellow and Mr Color C385 red whilst the prop assembly was painted with AK Xtreme Metal Polshed Aluminium, Mr Color C385 for the blade tip warning stripes and Tamiya Black for the back of the blades. 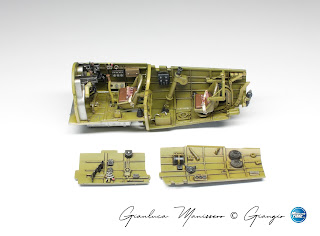 On 4 October 1942 Katsuki and Takarada flying 'Y1-23' rammed or collided with B-17 41-9118 of 72nd BS, 5th BG flown by Lt David C Everitt Jr which was one of five Fortresses (the other four were from 26th BS, 11th BG) reportedly attempting to bomb the seaplane carrier Nisshin. The Pete, identified as a 'Zero', first struck the Fortress' wing tip and then went on to smash into and rip off part of its fin and rudder. The Fortress immediately fell out of control in a fatal spin, last seen entering the overcast at 11,000 ft. None of the crew appear to have survived. However both Katsuki and Takarada were able to parachute from their equally fatally damaged Pete, being misidentified from the other bombers as two crew members bailing out of the spiralling Fortress, and were rescued by the destroyer Akisuki. In fact the B-17s had set out from Henderson Field, Guadalcanal with full loads of 20 100lb bombs each to attack the Japanese airstrip at Buka but bad weather and heavy cloud intervened to prevent them completing the mission. The bombers unexpectedly encountered Japanese ships off the coast of New Georgia as they were returning to Guadalcanal. Over the ships they reported being attacked by six floatplanes and six Zeros. For his action in downing the B-17 Katsuki, 23, received a commendation from his unit commander and the special award of a gold chevron. He was a seaplane 'ace' who would survive the war with 16 claimed victories, seven of them claimed whilst flying the F1M2 and later the floatplane fighters Rufe and Rex.
Image credit: All photos © 2021 Gianluca Manissero
Posted by Straggler 脱走兵 at 13:47

What a beauty! I admire clean builds, and this is simply superb with a smashing cockpit. Meraviglioso modello Gianluca! And thanks Nick.

A close look through the FAOW of only a few years ago on the F1M Pete shows remarkably clean aircraft in many of its photos. For me, such a finish is tougher to convincingly pull off than one with any degree of weathering. Very nice, Gianluca. Thanks for bringing this one to us, Nick.

Nice and clean "Pete". The interior is fine. Thanks for sharing and very interesting story.
F1M vs B-17. Great.

Simply superb in every aspect!

Thank you for sharing this spectacular model Nick and Gianluca

Echoing what is said in the previous posts it's really a delight to look at. You tied it all together with excellent finish and markings. Hope to see more of Gianluca's models! Thanks again Nick.

Nice looking Pete. That IJN green looks spot on. Superb interior too. As Alex said Wow how cool Pete vs. Flying Fortess. Real David and Goliath encounter. Probably the only way a F1M could bring down a B-17.Great stuff.

Very nice model of this classic plane! Lovely work on the interior too.

Hello Everyone!
I'm happy that you guys like my Pete, i will surely send pictures of my future builds to Nick when i'll get back on the workbench!
Again thanks for the kind words
Gianluca

Love it! Had no idea there was an IJN floatplane ace that survived the war. Would love to find out more about the markings of the aircraft he flew.