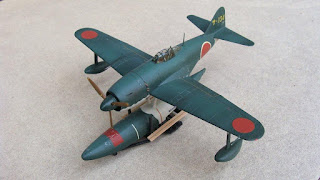 Continuing the IJN floatplane season Jim Anderson has very kindly shared these images of his splendid Kawanishi N1K1 Kyofu 'Rex' model in 1/72 scale built from the Hasegawa kit. Jim's model neatly compliments Guillermo's Rex (shown here in February) as it represents サ-134 ('Sa'-134) of the Sasebo Ku, a late production stablemate with individual exhaust stacks (variant and tailcode for each confirmed by photographs). A total of only 89 Kyofu were built before deliveries ended in March 1944. It is apparent that Sasebo Ku operated both variants but how many of each were made seems uncertain.  Jim has described the build as follows:- 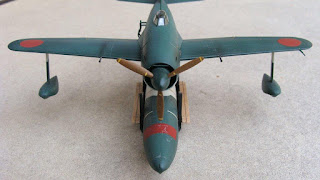 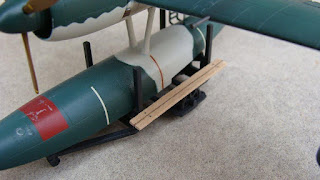 'This nicely detailed kit of the Hasegawa Kyofu “Mighty Wind” N1K1 ‘Rex’ Late Type was started in September of 2010 and finished that November.  The fit was excellent as was ease of assembly.  No modifications were made except for replacement of the kit supplied running boards on the beaching trolley with some handy HO scale lumber.  Kudos to Hasegawa for including a nicely executed scale access ladder for the kit. 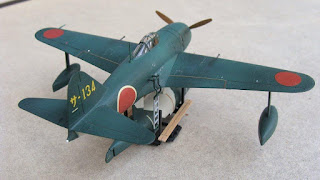 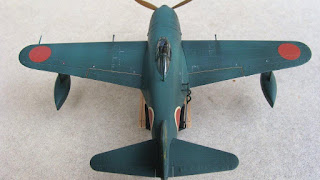 'Kawanishi’s ‘George’ lineage is apparent in the ‘Rex’.  It makes me wish that the four bladed propeller could have found its way onto one or two of the handsome floatfighters.  As you can see this Late Type model has a smaller spinner and an air intake on the face of the upper cowling.  I’ll move on to painting. 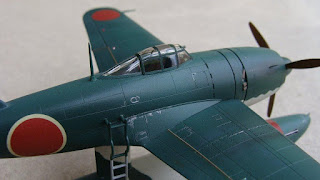 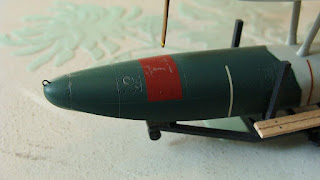 'Interior color is a three-way mix of Testors Flat Green 1171 (50%), Testors Flat Yellow 1169 (35%) and Testors Flat Brown 1166 (15%) of the still common little 1/4 ounce bottles.  Exact measuring?  No, just an idea, but it did produce a nice springtime bamboo green.  And since it is a seaplane, there isn’t any landing gear to mess with (another reason to build floatplanes!).  Topsides are Tamiya XF-11 Japanese Navy Green (70%) with Tamiya X-4 Blue (15%) and the remainder being Tamiya X-2 White and Tamiya XF-3 Flat Yellow equally.  The canopy framework was hand painted with the XF-11 that gaves it a darker look.  Undersurface color is Pactra IV3 Grey (FS 36622) from their long retired US Air Force Vietnam paint set, with Testors Gloss White 1145 (about 10%).  The propeller was painted with Testors 1166 Flat Brown.  Kit supplied decals were used. 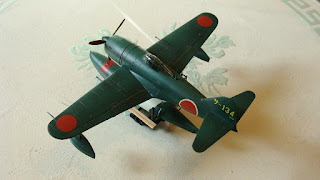 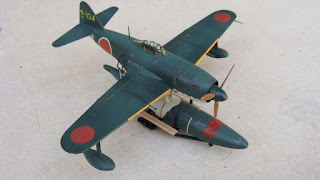 'The instructions didn’t call for the usual yellow IFF strips on the leading wing edges so they were originally skipped.  Having recently learned that there was a much narrower strip of the yellow IFF applied I added that later and took more photos!  So even when we finish a model it sometimes remains a 'work in progress' as new information comes to light.' 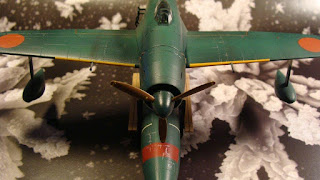 With very special thanks to Jim for sharing these images of his model and notes on the build. A popular subject this won't be the last Rex in this themed season.

What a terrific representation of the N1K1 by Mr. Anderson!

All the detailed additions (running boards etc.) are perfectly rendered and only add the overall excellence of the Hasegawa model

Gratitude to Nick and Jim for taking the time to share with all of us.

Very nice model! It seems with our Japanese favourites you'll never come to the ultimate end of a build - too many new details keep springing from research.

Jim, this one's a beauty, even among its many waterborne stablemates in your collection. To the rest of you, "Floatplane Summer" is an actual season at Casa Anderson! To see all of them together is impressive. I really like the green on this one. At any kind of distance, it would not look that different against an ocean than USN Sea Blue. It might depend on the weather and the day as to which was more effective camo.

Great photos, Jim; thanks for bringing it to us, Nick.

Nice build Jim. I have this exact same kit all painted and awaiting decals on my bench and I also put no IFF yellow wingstripes. Now I'm in a quandry. Pictures I had sure look like some didnt but we all know how much a B&W photo can deceive. In any case your Rex looks great. Love the green also.

Pretty model.
Is it really possible – there weren’t IFF stripes at the end of war?

Thanks for your comments on the "REX" build. I have heard that Kawanishi Green had the most blue in it. I took the plunge as I rather like the blue-greens anyway. To Kevin and Alex on the IFF stripe; I can only touch on its use or absence based on a single type that I'm actually building. The photos I've looked at really don't show one, but one did and it was enough for me to pull the trigger and paint one on. The fact that it was a modified, limited and narrow stripe proved too seductive and I had to have one like that. Thanks to Straggler for valuable insight I simply didn't have. The original Hasegawa instructions could be equally accurate as well. Six of one and half a dozen of the other as far as the "REX" Sa 134 is concerned.

I used Aeromaster acylic Kawanishi green on mine as well as a Shiden and I very much like that it is a slightly bluish green extraordinarily similar to your mix. I think I will leave mine sans IFF yellow and just " be happy".

The Nimitz Museum's N1K1 original paint revealed a 2-inch IFF stripe on the leading edge, difficult to see in photos although apparent in some of them.

Nick, your comment jogged my memory of some old photos I took at the Nimitz museum c. 1995 and the IFF stripe is there. I'm afraid that my attempt is not narrow enough!

Hi.You have so great looking models posted here and a lot of good info on them.I wonder if you can help me with finding materials on 1925 Abe-Kawachi flight Tokyo-Paris-London in Breguet XIX planes.