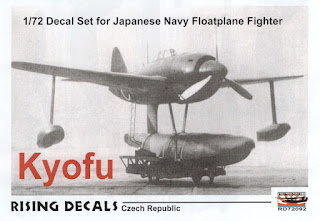 Appropriate to the continuing IJN floatplanes theme this recent release from Rising Decals, one of four new decal sheets, features Kyofu with three markings options in 1/72 scale for the Hasegawa kit.  All are early production versions, as follows:- 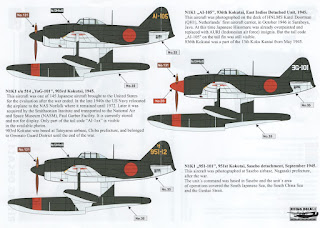 There seems to have been some mix up in the wording of captions on this sheet between the second and third subjects. All the subjects are in dark green over grey schemes with YoG-101 distinguished by a red spinner. Hinomaru sufficient for one aircraft are included and warning bands/stripes will need to be provided from the kit decals or by the modeller. The sheet is well printed with the correct orange yellow hue for the tail codes rather than the lemon yellow printed on some decal sheets. 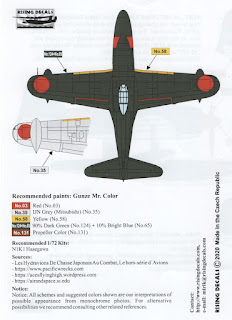 The surviving post-war Rex was stripped of paint and re-painted with USN blue paint, perhaps giving rise to a long running perception of a distinctly blueish green applied by Kawanishi. In fact when Robert C Mikesh* examined the original paint on the NASM example (protected by the tailplane fillet) he found it equated to Munsell 3.2 G 3.0/0.9, nearest 'standard' Munsell 5 G 3/1,  or to Thorpe's N2 Dark Green. Likewise when the extant Emily flying boat was restored in Japan the original paint was found to be the standard IJN black green.

Thorpe's N2 is Munsell 10 G 3/2 but the closest FS 595 value is 34058 at 3.99, significantly more blueish and perhaps inspiring the brighter blue-green attributed as 'Kawanishi Green' in several hobby paint ranges. The colour values cited by Mikesh suggest the paint on Rex was applied to the IJN D2 standard. Further details of Rex colours with chips to be published here in due course. Rising suggest a mix of 90% Gunze 124 Dark Green Mitsubishi with 10% 65 Bright Blue which reflects the Hasegawa kit instructions for 'Kawanishi Green', together with Gunze 35 IJN Gray (Mitsubishi) for the under surfaces. Mikesh found the original grey paint preserved on the masked-off data plate matched Munsell 7.2 YR 5.4/1.1 (a light greyish brown) but thought the thinly applied grey might have been influenced by the red-brown primer layer beneath it. Even so all indications are that the under surface paint was a warm amber grey rather than the cooler, brighter, whiteish light grey so long attributed in Japanese instruction sheets. This paint typically chalked to a lighter, slightly blueish grey in service, so all is not lost!
With special thanks to Rising Decals for the review sheet, recommended as an alternative and improvement to the kit sheets.
* In 'Japanese Aircraft Colours at NASM', Asahi Journal Vol.3 No.1 (undated)
Image credit: All © 2021 Rising Decals
Posted by Straggler 脱走兵 at 12:27

What excellent timing of this post. I have a stalled 1/48 Tamiya N1K1 partially because of a poor lower wing to fuselage joint and not being able to decide upon the most appropriate colours. Well now that you have clarified the latter, i need to remediate the former (after my trio of Raidens are complete). Thanks again Nick!

Thanks for the decal review as well as the great color info Nick.

Thanks to Nick and the Rising Decals team for another great posting and product!

Thanks for a short but very important article on "Kawanishi IJN Green".