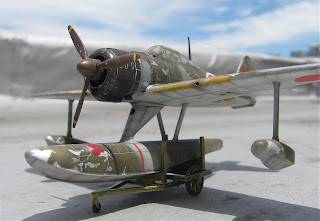 Last but by no means least of the trio of float fighters by Rob Ronconi is this striking model of a sun-bleached and well-worn Nakajima A6M2-N 'Rufe' built from the 1/72 scale Hasegawa kit out of the box with just the addition of antenna wire. The model represents a thunderbolt adorned float fighter from 934 Ku, attributed as the aircraft of unit ace PO2c Hidemori Matsunaga. 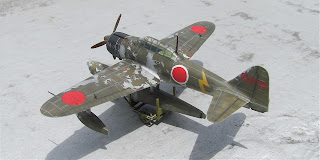 934 Ku was originally formed as 36 Ku at Balikpapan in June 1942 and equipped with 'Jake' and 'Pete' floatplanes before being re-designated in November of that year. A float fighter unit joined 934 Ku from Yokosuka in March 1943 and in April floatplanes and float fighters from the unit were detached to Maikoor on Aru Island for air defence duties, soon engaging in combat. The float fighters also escorted 'Jake' floatplanes on reconnaissance sorties over north Australia tangling with RAAF Spitfires on at least one occasion. From early 1944 the unit moved to Halong seaplane base, a former PBY base on Ambon Island in the Moluccas where they also began operating the Kyofu 'Rex' float fighter in addition to their 'Rufe' float fighters. There from 4 to 7 March the unit was well recorded by official IJN photographer Tetsuo Abe including another thunderbolt adorned 'Rufe' with tail code 34-116. An earlier photo reveals that this was not the same aircraft as represented by the Hasegawa kit, the thunderbolt being of different size, shape and position. It is possible that the thunderbolts were applied to identify those aircraft credited with the destruction of enemy aircraft. The appearance of aircraft within a unit operating for more than 18 months was never static and a photograph taken at a single point in time is never proof of a singular appearance at all other times.

'Rufe' is a perennially popular modelling subject but in 1/72 scale the Hasegawa kit, first released in 1994, was the first serious contender, eclipsing the old LS kit in 1/75 scale from 1964 (still available from Arii) and the iconic Revell 1977 release of the Frog developed but never released kit F234 of 1976.  Some 25 test mouldings of the Frog kit are believed to have been made, together with a few proof decal sheets as well as thousands of Type H1 boxes with box art as later used by Revell. With very special thanks to Rob for sharing these excellently photographed images of another superb float fighter model.

Nick, don't forget that Jo-han here in the U.S. did a A6M kit from which you could produce a Rufe. (When I was 12 I wanted that kit so badly.)

You are right, thanks, and unfortunately I neglectfully omitted to mention the Jo-Han kit A-105 of 1973 which provided alternative parts to build either an A6M2 or A6M2-N. The Jo-Han kit bears a resemblance to the LS kits of the A6M2 and A6M2-N as though perhaps based on those moulds but is not identical.

Yes, much like Warren I couldn't wait to get my hands on that Jo-Han combe kit "Rufe" ...and of course, the Purple livery just sent my schoolboy self over the top :))

I recently watched a video on YouTube of a history of the Jo-Han kit company. When they came out with the kits that allowed you to build one of two versions, it just blew my school boy mind. I didn't know what a "spare-parts box" was then, or "scratch-building", "kit-bashing", however I did get it in my head that maybe, just maybe I could save the parts from one, and use them on another kit.

Excellent Rufe Mr. Ronconi. Was the lightning bolt masked off? I still cant believe I have not built a Zero on floats. What is wrong with me. Ok...back up to the attic. Jo-Han, Revell, Hasegawa....hmmmn.

I still have a Jo-Han Rufe, needs a clean up though.

Yes, indeed Mr. Bade it's time to turn your high level of modeling skills into an A6M2-N ...as everyone needs a super cool "Rufe" floatplane for their secret island airbase :)