Back in April 2008, the year this blog began, Kit Trivia articles on three vintage Zero kits in 1/72 scale were published. Subsequent blogs covered the Matchbox Zero and the old tool Hasegawa A6M2. Omitted so far are the LS kits of the A6M2, A6M2-N and A6M5, originally released as 1/75 scale (and still available from Arii), and the Jo-Han A6M2/A6M2-N kit, as well as several of odd-scale Japanese kits, some of which have been mentioned but not examined in detail. Unfortunately the Jo-Han kit was also neglected in the summary of 1/72 'Rufe' kits included in the recent blog of Rob Ronconi's excellent Hasegawa Rufe model. To make amends the Jo-Han kit is presented here as an appropriate link from the IJN floatplanes theme to some Zero models forthcoming.

There is a fascinating exposition of the Jo-Han story on You Tube by Max's Models and I'm grateful to reader Warren for that discovery. Jo-Han released five 1/72 aircraft models in 1973 including the A6M2/A6M2-N as kit A-105 featuring their 'Frame-Pak' sprue frames, fairly innovative at the time because most kits contained loose parts cut from the sprues or partial sprues for small parts (although the Hasegawa old tool Zero of 1972 also had the parts on sprue frames). The Zero kit was moulded in white and uniquely offered the option of building the carrier fighter 'Zeke' or floatplane fighter 'Rufe'. That choice of model was facilitated by the provision of alternative lower fuselage centre sections and tail cones, with no concession to the more recent controversy over the size of the float fighter's tail feathers. 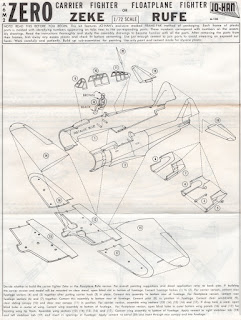 There are evident similarities between the Jo-Han and LS kits but they are not absolutely identical. The Jo-Han kit features similarly neatly engraved panel lines and fabric flying surfaces with boldly represented but not unattractive rib detail. The wings are slightly shorter in span than the 1972 Hasegawa kit with less taper on the outer trailing edge and shorter span ailerons but the fuselage halves are more or less the same in dimension. There is no interior or wheel well detail and the pilot sits on two pegs common to many kits of the time. The interior colour call-out is 'metallic blue' - aotake. The engine is a separate two-row construction but only the forward cowling is a separate part, the cowling sides being moulded integrally with the fuselage halves. Blind holes have to be opened in the lower wings for the attachment of the outer floats for Rufe. The undercarriage is conventional with separate legs, doors and wheels and can be assembled down or retracted. A two-part drop tank is also included. The clear sprue consists of a three-part canopy with windscreen, centre section and rear section, together with a rather nicely designed two-part stand. There is no mention of displaying the canopy open. 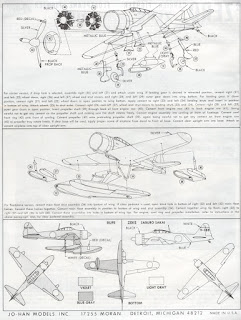 The instruction sheet combines sharply drawn exploded views with explanatory text and there is a simple colour chart for each option, the Rufe depicted as 'violet' over 'blue gray' and the Zeke as overall 'light gray'. No suggestions for hobby paints are made. An equally simple decal sheet is included but a curiosity is that the Rufe tail code on the sheet is O-105 in white, but depicted as black on the box art and shown as '52-102' in the instruction sheet schematic. The 'O' code is representative of the float fighter  hikotai of Tokoh Ku which operated a detachment in the Aleutians campaign. The Zeke is presented as V-103 of Tainan Ku as flown by famous ace Saburo Sakai, but the blue fuselage band and white tail stripes are not included on the decal sheet and have to be painted on by the modeller. The single set of hinomaru have white borders on the upper wing and fuselage discs, out of register in the kit examined.The attractive box art shows both Zeke and Rufe but the artist is unidentified, although the style looks familiar. 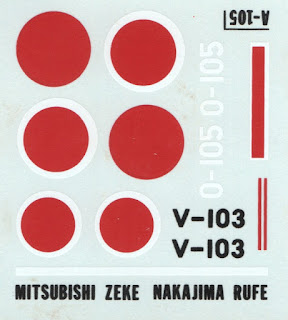 This was undoubtedly an attractively presented kit for its time but I have no idea how it compared price-wise to its contemporaries - anyone remember?

One of my favorites from my younger years of model building the Jo-Han Zero/ Rufe kit was one I fondly remember. I built several of them and my possibly naive thought at the time was that it looked better to me than the Airfix, Matchbox or old Hasegawa A6M2. I still have some unbuilt in the stash and I get a little warm sentimental feeling when I see them. Built most of their other kits, Corsair, P-47 ect and thought they represented themselves well. My memory on cost at the time says I think they were around a dollar US or maybe $1.25. Nice flashback post Nick.Wish I had saved an old built Jo-Han Zero to send in a picture. I remember doing Sakai's, a wrecked Zeke diorama and at leat one other that escapes me.

If I remember correctly, all the Jo-Han kits strongly reminded me of other kits, though the parts breakdown was occasionally modified, as with this kit, to allow two versions to be built. I built a P-47 and Bf109 F that I remember, but I'm sure I also had the Zero/Rufe.
Jo-Han was good about basing their kits on kits with decent profiles, so although there was no interior detail, the finished product did a good job of looking like what it was supposed to be. Jo-Han just couldn't stand well beside the newer technology and higher accuracy and detail standards of Hasegawa and Tamiya in 1/72, and they didn't try to go against the bigger scale kits of Revell and Monogram.

Wow ! What a fantastic trip in the "Wayback Machine" this Jo-Han model kit really brings back memories for me as well...just like Mr. Bade, I can recall building the Jo-Han Corsair and P-47 as a youngster and at the time I thought they were very well done.

Another part of the Jo-Han mystique that has always left me wondering was just what exactly happened to their planned Curtiss P-40 release?. Supposedly some P-40 kits were all ready to be issued and included accompanying box art but of course, it never came to fruition.

Any ideas or theories (Bermuda triangle, Area 51) would be most welcome:)

Thanks for the post, Nick. It was a quite reasonable choice till Hasegawa's Rufe.

Thanks for this Nick, and I'm glad you found the Max's Models video. I think he's done a lot of work with his thumbnail histories of various model companies, I know I've learned a great deal from them.

Baronvonrob, I recommend you watch the video Nick mentioned. However, in a nutshell by the 70's Jo-Han was starting its downward spiral as a model company. I'd venture to say that despite their unique approach, their a/c kits just couldn't compete with the likes of Hasagawa, Airfix, Revell, etc.

Very enjoyable Nick. The boxart was a big seller to me, two well executed paintings meant that I was really getting two kits. The Squadron summer 1974 lists Jo Han from the good old USA as A-105 Zero Zeke or Rufe ....$1.00. The previous kits being Bf-109 F or G, P-47D Razorback or Bubbletop, Me-262 A1a, A2a, B1a or B1a/U1 at the same price. Thanks again for the mental vitamin.

Re the price, I'm with Kevin and Jim; I remember that kit at a dollar, then bumped to $1.30 - this was the standard for its contemporaries for kits like the Monogram F7F, A-1E Skyraider. A 30 cent bump seemed harsh for Jack the Lad? Did they think we were made of money?

Thanks for another great post! The blog has been on a roll lately with great and inspiring builds...and nostalgic reminders of simpler times. This one made me think of riding up to Westcliff Mall with my friend Rick on our bikes, when we were too young to have driving licenses. We would always come back with a model apiece from Woolworths' or Daugherty's Drug Store (in the sixties and seventies some drug stores in the states had a wide variety of kits), and after a while I had to keep his at my place. As his mom said, 'you already have five or six you haven't built yet, and when you build another, you can buy another.' And he did keep building! Asterisk: she was the greatest, and is still going strong in her nineties!

Thanks for the article Nick. While this was before my time, it's nice to see how our hobby has progressed .

Thanks for the research time & effort to post it, Nick.