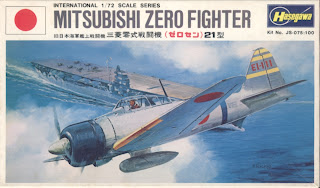 Hasegawa's A6M2 was probably the best of their quartet of old 1/72 Zero kits, the others - A6M3 Type 22, A6M3 Type 32 and A6M5c - all suffered from cowlings which were too long and too cylindrical in cross section. When Hasegawa revised their Zero series in 1993 the old Zeros were kept in the range but confusingly with the new box art on different boxes. I think the box art shown above was the first issue but Burns* has this kit number as being released from 1980 and the first issue as A3 (shown below in the orange banded box) issued from 1972 to 1980 and then, with the same number but in the blue banded box from 1982 to 1987. 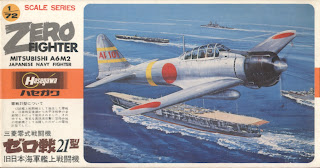 The box shown in the heading carries the number  JS-075:100 whilst the "A3" orange-banded boxes carry the number JS-075:200 which makes me believe they probably came later. In addition JS-075:100 offers only one markings option - that shown in the box art. The "A3" series included the instruction sheet from this version plus an additional markings sheet showing the three options offered in the box. These were:- 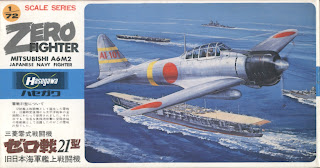 A3 in the blue-banded box carried a new number A003:250 but the box art by Kihachiro Ueda remained the same. Mr Ueda also created the distinctive box art for many LS kits as well as the 1/48th scale Fujimi kits and the Revell (Japan) 1/32nd scale kits. The original markings for EI-111 were not included in these issues, despite the instructions, which reinforces the belief that JS-075:100 preceded the A3 series - but confirmation would be welcome. For many years the kit was issued in a brittle, dark green plastic but the last editions of the blue-banded box were molded in light grey. It is interesting how this simple change immediately improved the appearance of the kit parts in the box. There were common frames for all the Zero variants in the series so with the A6M2 came the cowlings for the A6M3 and A6M5 together with engines and drop tanks. Building a few of these one soon had a surfeit of spare parts - enough to put radial engines on a Japanese Me110 (don't ask!).

I remember the orange-banded A6M2 being available around the same time as the Ki-44 and Ki-61 (also in orange banded boxes), but these were very different kits, molded in silver plastic with fine engraved details. The Ki-61 had cockpit details whilst the Ki-44 had a "bathtub" like the Zero. This suggests that the Ki-44 and Ki-61 might have been made from unused Mania molds, in development at the time Hasegawa took that company over.

The box shown in the heading was also issued by Minicraft Models, Inc., in the USA, but in end-opening format whilst the A3 series were issued by A. A. Hales Ltd., in the UK, also in end-opening boxes of flimsier quality than the originals. Were there any other boxes or issues? Please write in if you know, thanks.


Following on the theme from my comments in the Pactra Paints blog post the instructions in the first kit advised FS 26493 for the light gray colour. The box art also showed a light, slightly blueish grey that was common in the depiction of early Zero fighters. This colour formed the basis for many hobby paints and was popular in Japan up to the mid-1990's. In the A3 series no FS value was cited but instead "35 Light grey" was suggested, presumably a reference to a Japanese hobby paint colour of the time. Probably as a result of the new box art a few Zero models appeared in natural metal or silver grey finish!

EI-111 in the first kit had some fanciful striping, but which is certainly colourful on a finished model. A fuselage band in blue FS 15180 and tail stripes in yellow FS 13538. I see nothing wrong in building and finishing vintage models as they were intended, as an art form reflecting the model itself rather than the real thing!

Another blast from the past! I had this kit many years ago and like most things it was given away during frequent moves with the RAAF.

Recently I managed to get hold of it again through ebay and now have the second of the three kits shown on the blog.

It's really quite a good kit but suffers a bit from the raised rivets and a bathtub for a cockpit among other small details. I have the 1:72 Academy A6M5c and will be sacrificing that to provide parts including the canopy, instrument panel and cockpit flooring, undercarriage etc. They'll make up for the absent, or inaccurate, items in the Hasegawa kit.

An old Eduard A6M2 accessories kit (and I mean old - it must have been one of their first) provides a good seat and cockpit side walls among other components.

Hopefully the completed kit will look right and that's what I'm after. The finish will be a slightly enhanced Tamiya XF-12 IJN Grey to bring it up to a shade closer to an aircraft of 3 Ku around April 1942 after some months on operations in a tropical environment.

Unfortunately I haven't any of the Humbrol or Pactra sets left either, but I really enjoyed seeing them again. It brought back many memories - bright green Zeros, purple Rufes and all.

Keep up these great items Nick - there may not be many comments posted but I know your blogs and the information they contain are very much appreciated 'out here'.

I enjoyed this blog post very much.
Your hard work, and attention to detail on both model and blog are truly a public service.

I have not made a model in years, but
now I'm getting the itch again.

I look forward to exploring this blog further.

Thank you,
Blake B. KCMO