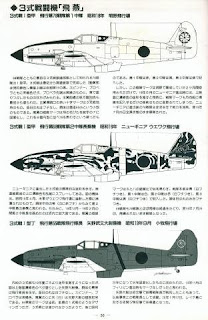 In January, 1984 Japanese aviation writer Shigeru Nohara illustrated and described this Type 3 fighter model I Ko 'San Shiki Sen' (Kawasaki Ki-61 Hien "Tony") of the 78th Sentai as seen at Akeno airbase in Mie, Japan in May or June, 1943. This was part of an article in Model Art # 225 illustrating 30 specific JAAF fighter aircraft with detailed and very useful notes on their camouflage and markings, particularly the origin and form of the distinctive Sentai markings, which I had translated into English at the time.
The 78th moved to Akeno in April 1943, prior to advancing into the maelstrom of New Guinea, to re-equip with and work up on the Japanese Army's only operational inline engined fighter. According to Mr Nohara the marking illustrated, consisting of a circular design of 8 "petals" of stylised 7's was in use for a brief two month period at Akeno until the unit moved south in June 1943. The marking was not painted on all aircraft and only appeared on uncamouflaged aircraft still in their natural metal finish. When the aircraft were camouflaged prior to embarking on operations the "chrysanthemum" or "cherry blossom" marking was obliterated.
According to Mr Nohara's original article the Chutai colour distinctions for this marking were 1st Red, 2nd Yellow and 3rd Green.
Mr Nohara repeated this information in his 2007 monograph on the 'San Shiki Sen' (Model Art 733, pages 128 & 142), but suggesting only a different Chutai colour sequence, as follows:-
"When the Sentai first re-equipped with Ki-61s it adopted a marking with eight cherry petals, each being a symbolized '7', arranged to represent a single cherry flower. But this beautiful marking was deleted when the aircraft were camouflaged before the Sentai's deployment to New Guinea. It is said that marking was coloured for each Chutai, being white for 1st Chutai, red for 2nd Chutai and yellow for 3rd respectively. But there have been no evidences found for that."
The reason for the deletion of this marking, according to various Japanese sources, was because it appeared too similar to an Allied roundel and/or that it did not show up sufficiently clearly against the mottle camouflage applied to the aircraft.
Without a photograph showing the marking in situ on an aircraft those "doubting Thomas's" for whom an absence of photographic evidence is evidence that the marking did not exist will no doubt scoff, as they did for the 9th and 29th Sentai insignia before photographs of aircraft wearing those particular markings appeared.
For those other more generously spirited and open minded souls who may wish to model an aircraft wearing this unusual tail marking, they were included in a free decal sheet with the Kagero Miniatury Lotnicze No. 23 on the 68th and 78th Sentais, published in 2003 (ISBN 83-89088-01-0). The decal sheet, printed by Techmod, provided the marking in Red, Yellow and Green, in both 1/48th and 1/72nd scales.
Image credit: © Shigeru Nohara, Model Art, 1984
Posted by Straggler 脱走兵 at 17:28

Thanks very much for the translated information from Model Art numbers 225 and 733. A similar appearing but different side view elevation of a natural metal finish Ki.61-I, with the same tail marking, appears at the top of page 66 in Model Art #263.

The 78th Sentai chrysanthemum or cherry blossom marking was also featured on the decal sheet in one issue of the Right Staff 1/48th scale, resin Ki.61-I Hien kit. I am sure the Kagero Miniatury Lotnicze No. 23 decal is much easier to come by now.