The Many Splendoured Plumage of Hayabusa 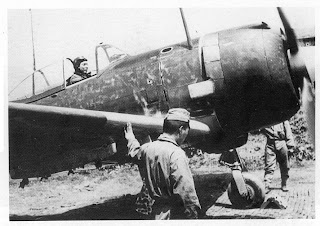 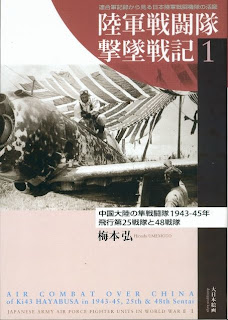 I have spent a little time with a large magnifying glass and original prints of the photographs from Mr Hiroshi Umemoto's splendid book about the 25th and 48th Sentais over China (sad, I know). These are quite revealing as to the truly varied and haphazard nature of the camouflage schemes and really do repay careful study. It is easy to get a fairly fixed mental impression of the schemes and then to transfer that to a model or painting without actually capturing the reality of the schemes being depicted. It is very difficult to reproduce the looseness and evolutionary nature of some of the mottles without a rather stylised caricature resulting. This is especially true of some of the more densely applied camouflage, such as on 25th Sentai commander Sakagawa's well known Ki-43 (above, top & middle), which would prove exceptionally difficult to reproduce in 1/72nd scale other than painstakingly with a very fine paintbrush!
Examining pictures of Sakagawa's aircraft, whether of models or profiles, it is clear that different interpretations have been made, but none so far appear to accurately replicate the true appearance of the mottle, even leaving aside the question of the colours! Note also the very light appearance of the exhaust outlets, most often depicted in dark or rust tones. For many years the tail stripes on Sakagawa's Hayabusa were depicted as blue and white - more recently as three stripes of yellow, red and white. Re-interpretation of the photographs or something else?
One other 25th Sentai aircraft in the book has a solid, mid-toned uppersurface colour over which the sparsest of darker mottles has been applied. The blotches are so random and so far apart that replicating this on a model would probably look ridiculous and attract the scornful disbelief of viewers. Another detail I noticed was the application of an apparent mottle over the fuselage but a denser, almost solid colour on the wings. Closer examination revealed that the "mottle" on the fuselage was in fact a very worn solid finish which appeared to have been touched up here and there with the odd blotch of a completely different colour. Fascinating.
Another mid war, mid-production Hayabusa in mottled scheme revealed a complete absence of yellow leading edge IFF strips. Omit that from a model or profile and the nit-pickers would have a field day - but there she was, plain as day, in a very clear photograph.
Hopefully food for thought when planning that Hayabusa scheme you think you know so well!
Image credits: © Model Art 2006; Author's Collection; © Hiroshi Umemoto, Dai Nippon kaiga 2007.
Posted by Straggler 脱走兵 at 22:55

Hi Nick,
My vote on the photo of Sakagawas' Ki-43 is a toght mottle of a lighter green, or an earth brown shade, with a darker green dominating. There appears to be NMF peeking through in places too....
From my study of the handful of known images of Ki-43II-Kai, there were certain painted features found on this type that were not seen on other variants (wheel hubs in IFF yellow, prop blade stripes) . So....I agree wholeheartedly that there were many "flavors" of Hayabusa camouflage and related markings, both factory and field applied.
Dan

Please advise where one can order the 'Air Combat over China' book by Mr. Hiroshi Umemoto.

Agreed. There was a good Rikyu Watanabe profile which accompanied Dr Izawa's article on the 25th Sentai in an old Koku-Fan. Apart from the blue and white command stripes the profile depicted a camouflage very similar to how you describe, of two greens.

I shall send you links for Mr Umemoto's books.

first off, thank you for the work you do on your site. It is very informative and valuable to those of us who are often confused by the world of Japanese aircraft colouring.

I am glad you pointed out the light coloured exhaust pipe on the Hayabusa. This seems not uncommon amongst Japanese aircraft. Another well known one is a Val recovered at Pearl Harbour.
Without any further evidence than the photos I had guessed the colour might be silver. The only reason for this being that I have seen the headers on automobile engines painted so. What is your guess? Or do you have further information you might be able to share with us?

I remember reading somewhere the bright metal color of some exhausts was due to a 'metalize' coating having been applied to the carbon steel fabrication. I can't remember now where I saw this.