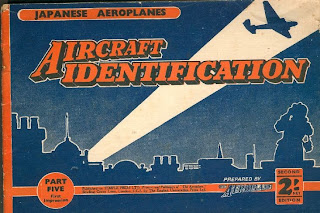 This guide to the identification of Japanese aeroplanes, published by 'The Aeroplane' and 'The Aeroplane Spotter' at the very beginning of 1943, is fascinating and I shall post some excerpts in due course. It's a revealing snapshot of British public knowledge about Japanese aircraft at the time and perhaps the surprising thing is not how little was known but how much. Of course there are some interesting flights of fancy too!
On camouflage and marking the book has this to say:-
"Japanese aircraft are mostly painted light grey or light green on all surfaces, or dark green on upper surfaces with light grey undersides. Some types are known to be camouflaged with grey and green on upper surfaces. The red disc (rising sun) appears on the wing tips of both upper and lower surfaces and in most cases on either side of the fuselage. Where the red disc appears on a dark background it has a thin white outline. Coloured identification bands run round the fuselage near the tail on some types. In some instances horizontal white stripes appear on the fin and rudder."
That is interesting because it provides confirmation, backed by other contemporaneous sources such as combat and intelligence reports, that the general appearance of Japanese aircraft in the early part of the war was that they were painted light grey or light green. There is no mention of khaki, brown or tan.
An officer of the British Air Mission to Japan in 1922 is quoted regarding the calibre of Japanese pilots:-
"The Japanese as pilots I consider very good. They are steady and reliable and I think the average is high. They produce very few star turns but also have very few failures. Their great failing is that they are not quick enough in an emergency. They have little thought for their engines and seem to have no 'ear' whatsoever. Although slow thinking they take about the same number of hours dual as we normally give to new pilots. They are remarkable shots, and I should think that in a scrap their one idea would be to down the enemy regardless of the cost to themselves. They are not consistent, and even their star turn pilots do strange things at times - perhaps through over confidence."
Image credit: Author's collection
Posted by Straggler 脱走兵 at 14:34

Yes,this is a real nice book, and well illustrated for its time.
I'm happy I found one on eBay. There another one
and I guess it's older; Hutchinson's Illustrated Record:Warships and Aircraft of Japan (no publication date given) 1'3shilling.
Not as nice as the one by 'The Aeroplane' and only twelve pages of a/c