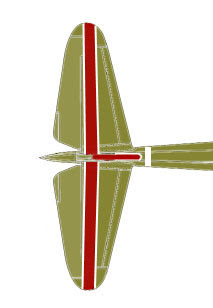 The next Hasegawa special edition Hayabusa kit was 00192 "59th Flight Regiment" released in 2001. This featured box art and markings for the mid-production Ki-43-II of Captain Shigeo Nango, executive office and acting commander of the 59th Sentai operating from East But, New Guinea in December 1943, with an alternative for Captain Kitakoga Yûkichi, 2nd Chutai leader in the 54th Sentai based at Horomushiro Island in June 1944. The main kit instructions were unchanged but a sheet with colour and markings details for the featured options were included.
Nango's colourful bird has sometimes been depicted with red fuselage stripes and sometimes without the stripes on the horizontal stabilisors which were part of the unit insignia. An article in FAOW # 65 of July 1997 "Nango Tai-i to Hayabusa 2-gata; Niu Guinia Kokusen no Ichi Danmen" (Captain Nango and his Hayabusa Model 2; One Phase of the New Guinea Air War) written by respected Japanese historian Yoji Watanabe finally clarified and confirmed the actual colours.
Watanabe-san had interviewed veteran Hitoshi Kawamura, a lieutenant in the 59th Sentai's maintenance section. Kawamura-san had joined the unit as maintenance leader in the 1st Chutai at Bandoeng, Java in February 1942. In March 1943 he was promoted to armament officer assigned to the Sentai Hombu (HQ) and remained in this capacity throughout the 59th's operations in New Guinea, coming into contact with Nango's aircraft constantly. When the Sentai withdrew to Manila for R&R in October 1943 it acquired 34 aircraft, enough to assign a personal aircraft to each pilot. Nango's assigned aircraft was S/N 6010.
The blue stripes painted on the fuselage represented the position of "senior officer assigned to the Sentai Hombu" (i.e. Executive Officer). The red tail stripes of the 2nd Chutai were retained however, because Nango had previously been the 2nd Chutai leader and his aircraft continued to be maintained by the 2nd Chutai maintenance personnel. A photograph of the aircraft around this time shows it about to sortie with a single drop tank carried under the port wing. Nango was killed in action on 25 January 1944 and is believed to have been downed in air combat by 1st Lt Robert M DeHaven of the 7th FS, 49th FG.
When the Hasegawa kit was first released it provided alternative parts to build, in theory, all II versions except the II Kai. These included early and late headrests, early and late exhausts and parts for the first production annular oil cooler and small triangular oil cooler. The engineering of the kit suggests that Hasegawa may even have contemplated offering the different cowling configurations. Unfortunately building the earliest production variant was not possible because it had the longer wings of the Ki-43-I. The drop tank pattern and configuration, inboard of the undercarriage and the absence of a landing light on the leading edge of the port wing also precluded building a late production version without modification. No provision was made for the subtle changes in cowling pattern.
In describing Ki-43-II variants the terms "ko" and "otsu" (approximately corresponding to 'a' and 'b') have been used but this may not be appropriate. These designations within the JAAF were usually used to identify armament variations and recent Japanese references have used instead the terms "early", "mid" and "late" production when describing the Ki-43-II variants. These variants will be discussed in more detail in a future post on the subject. For now it is sufficient to record that the Hasegawa kit can only be used, out of the box, to build a mid-production Ki-43-II and that for other variants additional modifications will be required.
With grateful thanks to Osamu Tagaya.
Image credits: Box Art © Hasegawa Corporation, 2001; Illustration © Straggler, 2009
Posted by Straggler 脱走兵 at 12:38

The pilot figure in the Fine Molds Oscar kit FA-9 (Ki-43-II-ko) is based on a well-known shot of Nango, resolute with hands on hips. for 1/48 scale, it's remarkably good.