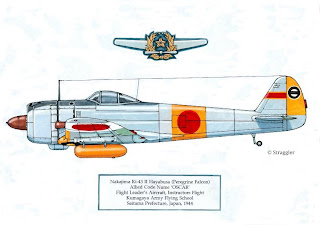 It really is quite sobering to think that the Hasegawa 1/72nd scale Hayabusa is 27 years old and yet still the best Oscar II available in the scale. The overall shape is superior to the much more recent Hasegawa 1/48th versions and to the Fujimi Ki-43-I.  AML have produced III Ko and II Kai versions but they are injection/resin hybrids with vacform canopies - not the easiest of builds.
I do hope that if Hasegawa should ever decide to issue a new 1/72nd Hayabusa it will not be based on their 1/48th kit! I think the most likely contender now is probably Fine Molds but let's hope the "ultimate" Hayabusa is not issued with a magazine! In 1/48th scale there is already the excellent Fine Molds kit to fall back on, available in several versions and much more easily obtainable these days.  It has a good overall shape but is tricky to assemble. In the same scale the venerable Nichimo Ki-43-I is still the best early Oscar so far.
Several years ago Eduard announced a 1/72nd Ki-43-II kit but at some point abandoned the idea. It should be possible for a Hayabusa II kit to incorporate optional parts for all versions and those needed for the III Ko. The type served the Japanese Army on all fronts from the beginning to the end of the war, a veritable war horse and work horse, so it deserves to be represented by a mainstream, state of the art kit in the divine scale!
The first special edition of the 1/72nd Hayabusa kit was the Ki-43-II 'Otu' (sic) 'Flight Training Regiment' issued as kit # AP123/51383 in 1995 with new box art (top picture). It was molded in light grey plastic and included decals for two instructor's aircraft used in Homeland Defence duties from the Hokota and Kumagaya Army Flying Schools. These aircraft featured overall natural metal finish and white Homeland Defence bandages on wings and fuselage.
The second option, from Kumagaya, was for a well known aircraft I had previously depicted in a profile painting.  That profile has been the subject of some criticism for my choice of yellow fuselage bands! It is shown here again with no particular claim for its accuracy. I used to have an Otaki model in this scheme (with white bandages and a plain rudder) built in the late 1970's but it has not survived the various moves. If I was going to build another model in this scheme it would be exactly like the profile painting!
The next installment will set out improvements to the Hasegawa kit and explore some of the aftermarket sets available for it.
Image credit: Box Art © Hasegawa Seisakusho Co. Ltd., 1995; Profile © Straggler, 2009
Posted by Straggler 脱走兵 at 20:48

I built the Fine Molds -II a few years back, and it was a very "futzy" build indeed. If one could incorporate the superior interior and landing gear parts of the Hasegawa kit (discard that woefully shaped fuselage!) and also if building a mid to late production aircraft, modify the cowling, you would be in great shape.

I attempted to build the Hasegawa -I in 1/48, and found the kit very poor in shape and engineering. The Nichimo kit is far superior in all respects despite it's age.

Just a thought....I wish that Tamiya, rather than release a new 1/48 A6M, had crafted the "ultimate" Hayabusa in the same scale....
Dan

Great article. I would like to know about the accuracy issues with the Fujimi Ki-43I. When I have compared the two kits I have noticed that the rear fuselage of the Fujimi kit is fatter when viewed from above. The Hasegawa kit is a Ki-43IIa out of the box. It has the clipped wings and no landing light, but the larger oil cooler under the cowling.
By the way Special Hobby/MPM are supposed to come out with a couple Ki-43's this year.
Thank you for your great website, Dave

Thanks for the extra comments regarding building the Fine Molds kit. I agree about the Tamiya "ultimate" Hayabusa!

Thanks also for the kind comment about the website. I'll cover the Fujimi Ki-43-I shape issues in more detail in a future post but in essence it has the same fuselage inaccuracy as the Hasegawa 1/48th kit - the top fuselage line having too severe an angle change at the cockpit giving it a "broken backed" look and contributing to an impression of too much depth.

For the Hasegawa II it is not so simply described as a Ki-43-II Ko. More about this in Part 3! The Hasegawa kit (1/72) captures the slender rear fuselage of the Hayabusa better than any other kit.

Thank you both again for the comments. Keep 'em coming!

Hi Nick,
Another great topic and I really like the look of the Kumagaya bird.
May I ask, what is backstory on the yellow banding? I recall an OOP Aeromaster sheet also depicting a Shoki with yellow bands. I think the yellow banding would look especially sharp against a "Hayabusa-blue" background color;)
Thanks again for an enjoyable and informative blog...

Thanks! My understanding from correspondence with two veterans is that the instructor's aircraft used for Homeland Defence sorties in the Operational Training Units were sometimes distinguished in this way. It may have been a means of quick identification to prioritise them for re-arming, re-fuelling, etc. Photographs of this particular Kumagaya aircraft suggest that may indeed have been the case but it is hotly disputed by those who insist the "grey" tonal appearance of the fuselage band, which is similar in tone to the yellow wing leading edge ID strips and the "grey" trim on the horizontal tail band, is just stained and "dirty" white as a result of exhaust gases. An examination of the bands on different aircraft types where the same factors might apply is a worthwhile exercise and I draw my own conclusions from it. I don't know for sure but then neither do those who dismiss the idea.

When Hasegawa kitted the Shoki "Asakaze" ("Morning Breeze") of the 104th Sentai they depicted the "grey" tone wing tips, propeller tip and fin tip on this natural metal bird as "hairyokushoku" (grey green). Knowing the 104th used coloured wing tips, propeller tips and fin tips to distinguish the Chutai and not having previously encountered the standard airframe grey-green used as a Chutai colour it seemed obvious to me (!) that the "grey" tone was more likely to have been blue, red, white or yellow, with the latter being most probable. But I guess that is another story! Interpreting "Asakaze" that way certainly makes for a much more colourful and striking machine.

I would certainly choose to model the Kumagaya aircraft wearing the yellow bands without qualms. Yellow against blue might be stretching it though! :-)

Thanks Nick...very interesting stuff, once again.

I will certainly agree with others that I was hoping Mr. Tamiya would have graced us with a top notch 48th Hayabusa...*sigh*

Having tried to salvage the Hasegawa 1/48 Oscar in several ways, I gave up. It seems odd to say, "well here's a relatively new Hasegawa kit...and I don't like it." But I'm with you folk, I don't. The slope of the forward fuselage is a very difficult fix, or it is for me, anyway. The Nichimo kit looks better shape-wise, but though it has its own problems, at least they bear reasonable solutions, in fact the Hasegawa kit makes a nice parts depot for such.

I tried to combine the two kits, using the Nichimo fuselage, and just ended up with two ruined kits.

By the way, has anyone attempted to use the wonderful FM cockpit set (made for Hasegawa) in the Nichimo kit? Suggestions?

Let's hope for a Tamiya kit one day soon if we dare and in the meantime build those nice new Nick and Pete kits. Can't wait to see that Pete!

Thanks for the comments about this. I think the problem lies with the Matsuba Minoru plans which are exactly similar to the Hasegawa kit. I plotted some lines on photographs of the model against real photographs to demonstrate that the cockpit level is too high. The angles from the headrest back to the tail and from the windscreen to the cowling face are too severe resulting in the "broken backed" look and a tapering cowling top that just looks wrong. I will post them here.

I pulled the Fine Molds Oscars out for the first time in a while and found the etched metal set (separately available) in the box also. This is set HD48-01. While this is way overpriced at 2000 yen, as long as we are talking about the best way to make a good model in 1/48, it's worth having. The set gives you cowl flaps for all three versions, an amazing seat, two different annular radiators for the earlier mark engines, a beautiful engine wiring harness, seat belts, instrument panel, and landing gear doors. When I built the Fine Molds kit I found the engine molding to really need improvement, as it's very visible once you're done. One of those Vector engines with the FM wiring harness would really give you a nice result.

Thanks for this additional information Mark.

I recall that Fine Molds also marketed a replacement/alternative injection molded cowling front for their Hayabusa kits but I can't remember the details, whether there was just one or more versions?