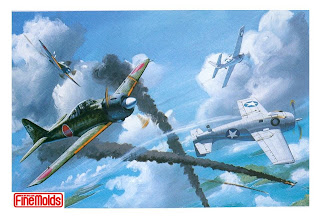 The new Fine Molds 1/72nd scale A6M3 Model 32 Zero 'Hamp' kit has been released as a special edition with Volume # 65 of Scale Aviation Magazine. Unlike the previous Fine Molds A6M2 kit this one comes complete with a single issue of the magazine which is dedicated to a re-appraisal of the A6M3 type, contains instructions for building the kit, colour and markings details and two build reports by Japanese modellers. Further details of the contents of this issue and an image of the cover may be found at j-aircraft.com but please note the aircraft on the cover is not the new Fine Molds kit but the old Tamiya 1/48th example. All in all a superb package, if expensive for those living in the UK as Sterling continues its nosedive (approximately £23 not including shipping - yikes!)
The kit is an absolute gem. Molded in appropriate colours like the A6M2 it is tempting to build it without painting it. The main components are in an "olive grey" plastic, with olive green for the cockpit parts, black for the cowling, undercarriage legs and wheels, and silver for the engine and prop. Shades of Matchbox, although infinitely more precise in both the colour demarcation and molding!
The cockpit is stuffed full of petite detail, with sidewalls, boxes to stick on them, side console, cowling gun breeches, magazines, stick with actuating link, rudder pedals, seat frame assembly and decals for instrument faces. Alas no pilot figure! This is very much a kit made for modellers, as evidenced by the separate wing flaps, optional open or closed cowling flaps and optional one piece or three piece canopies.
Markings for three examples are included with some options and one set of Hinomaru complete with separate white discs:-
1. Q-102, an overal grey Houkoku (presentation) aircraft # 872 of the 2nd Kokutai at Buna, New Guinea. Interestingly Fine Molds depict the tail code as red outlined white whereas in the Hasegawa release of the same aircraft (AP103/51363 in 1994) they depicted it as black outlined yellow.
2. T2-188, a field camouflaged aircraft of the 204th Kokutai at Rabaul, with alternative code for '190', another aircraft of the same group.
3. 'Ta I'-180, a green over grey aircraft of the Tainan Kokutai flown by ace Takeo Tanimizu, with the code provided as both white and yellow versions. This machine has an unusual undulating division between upper and lower surface colours and Japanese calligraphy on the rear fuselage. It is the same aircraft depicted in the 1993 Hasegawa kit AP16/51316.
I'm partial to the A6M3 of all the Zero versions and if you plan to build one in this scale then the Fine Molds kit is the best place to start. There have been previous kits, including the Hasegawa 1990's version, which is still sound but does not have the same loving detail lavished on it as the Fine Molds kit.
Platz/PHU produce a nice sheet of A6M3 decals for four Houkoku aircraft, currently out of stock at HLJ but may be re-issued as other Platz/PHU decal sheets are.
Posted by Straggler 脱走兵 at 14:17