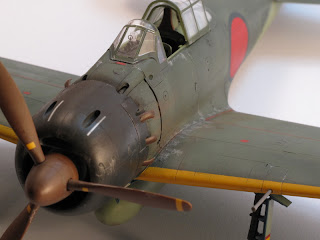 Dave Sherrill has kindly contributed these images of his Tamiya 1/48th A6M5 build. Dave had read Dan Salamone's appraisal of Tamiya's A6M5 but his experience was not the same:-
"I think we had different experiences in building this model.   I began construction of this kit shortly after its release and that was some time ago and I honestly can't remember any details of the build other than nothing stands out as having been really bad or frustrating.  I did happen to make a mess of the canopy when I attempted to use the kit supplied masks.  I should have taken my time cutting them out, but I rushed the job and they didn't look all that good to me once they were on.  Off they came and I tried to re-mask using Bare Metal Foil.  I really made a mess of that too and decided at that point to buy a new clear sprue from Tamiya USA, a masking set from Eduard and start this process all over again.  It only took Tamiya six months and several phone calls to send me a replacement sprue.  But, once I got my new canopy I finished the kit in about a week.  While I can't recall all the details of the build I do know that at the time I was building it I thought it was one of the best fitting kits I'd ever worked on.  However, I've built enough models in my time to know that modelers often have completely different experiences with the same kit.  Kits that are supposedly shake and bake for some prove daunting, humbling, experiences for others.  For instance, I will not attempt to build another Tamiya Storch or He.162.  This Zero however was a lot of fun and I'm really looking forward to building the new A6M3. 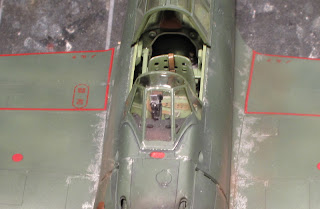 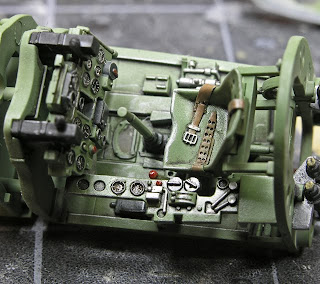 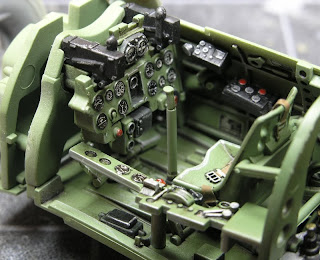 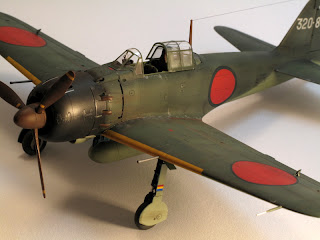 "The cockpit alone was simply the best kit cockpit I have ever worked with.  The only addition outside of the kit parts were some Eduard PE seatbelts.  I used Tamiya acrylic paints and the kit's hinomaru decals.  The decals reacted well to my repeated applications of Solvaset as I attempted to get them fully snuggled into every line and rivet.  I will attach some more photos of my Zero because it is a well engineered and excellent fitting kit in my opinion.  I entered my Zero at this year's Seattle IPMS show in April and took first place in 1/48 single prop Axis (Pacific)." 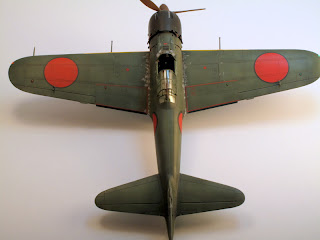 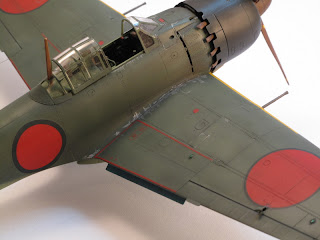 Image credits: All photos courtesy of Dave Sherrill
Posted by Straggler 脱走兵 at 15:37

Hi Dave,
I am truly happy that you had such a pleasurable time with your copy of the kit- it looks wonderful and I especially like the color and finish.

As you stated, different copies of the same kit can result in different quality control. The one thing that we both shared in our experience was the issue with the canopy masks- I am unsure if I touched on that in my review, but I also found the result lacking and would suggest to anyone else building the kit to go with your own masking technique, or the Eduard mask set rather than using the Tamiya supplied mask.

Thanks for posting your build and sharing your experiences.
Dan

Very Nice!
To my eye, depicting wear and tear on on airframe works best when the effect is understated, as in this fine example.
Thanks for posting Nick, Kind Regards, noel