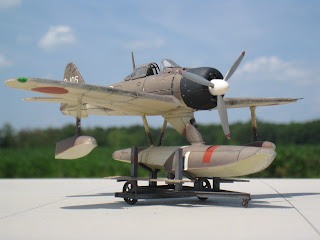 From correspondent Jeff Groves come these beautiful images from his collection of IJN floatplane models. All the models are to 1/72nd scale. There is no doubt that the diversity of IJN floatplanes makes them a very attractive modelling theme. 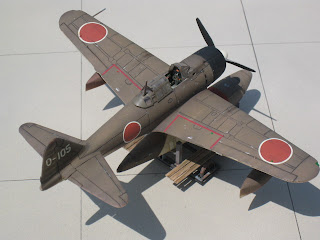 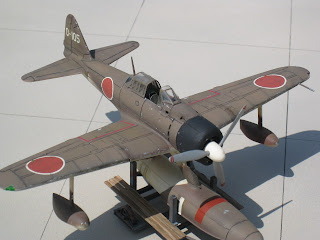 The first is the Jo-Han Rufe (believe it or not!).  Jo-Han issued a model believed to be based on the LS kit and which contained optional parts to be be built as either an A6M2 with undercarriage or an A6M2-N with floats. The model was completed more than 30 years ago, but Jeff took it back to the bench for a little repair and updating.  The scheme is one of the "purple" Rufes, Jeff had read reports of the upper surfaces of some Japanese aircraft being chocolate brown, and felt that was more likely than purple.  He replaced the canopy with vacuform, and scratchbuilt a beaching dolly, but decided not to correct the camo. I think it looks excellent. 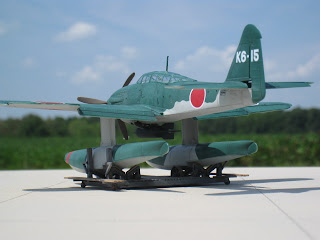 Next is the Tamiya Seiran which Jeff reports is an excellent kit in all respects.  He repositioned the control surfaces and flaps, and modified the beaching gear.  Photo-etch seatbelts were added to the cockpit. 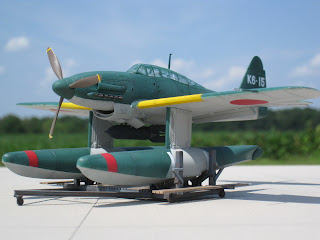 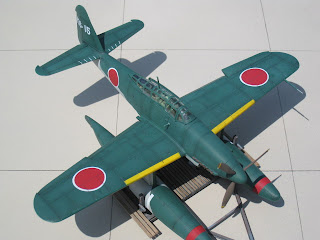 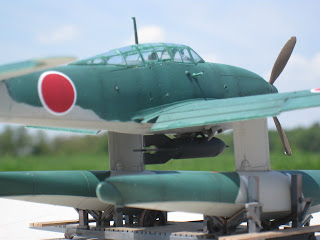 The "ramp" in these pictures is actually a piece of foamboard.  Jeff lightly sprayed some dark areas using black aerosol paint, and then misted a thin layer of appliance touch-up paint over that.  The lines were applied with a drafting pen.  The total cost was about $10.00.  All pictures were shot outside in natural light, the board angled to take advantage of a treeline in the background. 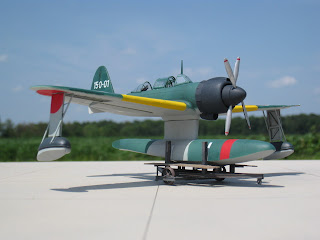 Finally here is the Xotic-72 (previously Aviation Usk) E15K Norm, with a lot of modification.  There was little cockpit detail, so Jeff made castings from the Tamiya Seiran cockpit and started working from there.  He also made castings from the Seiran control surfaces and used these to replace the originals, as they had no surface detail. 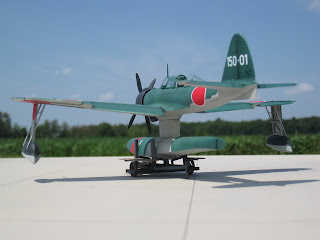 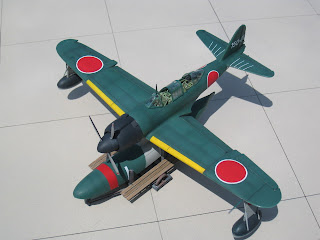 The wingtip float supports and interior wells were built with Plastruct.  Jeff removed the cowling, and inserted a spare radial engine.  The cowl flaps and exhausts were added, and he replaced the propeller blades with some from the spares box.  The beaching dolly was scratchbuilt, again from Seiran castings (wheels) and Plastruct. 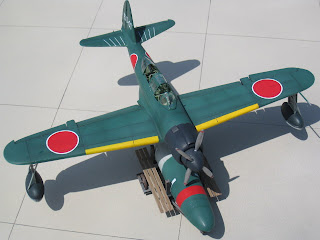 Thank you to Jeff for kindly sharing these lovely images of such well-presented and inspiring models. More please!
Image credits: All courtesy of Jeff Groves, © 2010 Jeff Groves
Posted by Straggler 脱走兵 at 12:14

Some fine workmanship on display here, well done Jeff!
A fine example as well of the variety of airframes available to model in 1/72 scale.
Thanks for posting Nick, Cheers!
noel

Great models of very interesting aircraft- thanks for posting these Jeff.
Dan

Beautifully done - with these photos anyone could be forgiven for thinking that they were finely done 1/48 scale models.

Thanks, Jeff, and for posting these, Nick. The latest posts have been very interesting.

Excellent models and the purple Rufe looks great, as do the beaching trolleys.

Owen Veal in Darwin is revamping his 1970s vintage Rufe (that means he's repairing the breaks and other injuries suffered over the intervening years) and once it's finished I'll send on images - even though it's also purple.

Very inspiring and beautiful work.
Amazing what you made of this old Jo-Han Rufe,
( have two of 'm laying idle) but with the Humbrol
'Mauve' still laying around who knows;),
Is that dolly scratch-built?

Thanks Nick, I am honored to have my work included amongst so many fine projects from your other correspondents. I also appreciate the kind words from those who have commented.

Jacob - yes, the beaching dolly on the Rufe is scratchbuilt. I used the same basic construction as that on the Norm, but in retrospect the type seen on the excellent Pete build above is more accurate for a Rufe.

Again, thanks to all!
Jeff