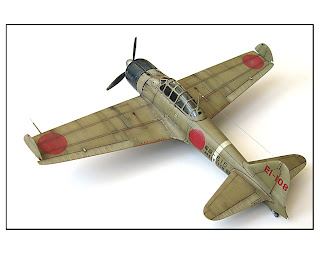 There are two amazing negatives about Petr Prause's A6M2b Zero model. The first is that it is not to 1/48th scale and the second is that it is not built from the product of a Japanese kit manufacturer. This amazing model, believe it or not, was built from the new Airfix 1/72nd scale kit. The full build report can be found at Britmodeller here. Petr's choice of colour was criticised by one commentator as being a tad too dark and whilst from a personal viewpoint I might agree by comparison to the original paint, the point is that the model was painted to match Shigeru Nohara's fold-out colour profile in FAOW 55 - and does so admirably. I tried Petr's paint mix and found it just a little dark and brown but the considerable adjustment he made with various oversprays and washes have significantly enhanced it. Also, bearing in mind the degree of realistic weathering the finish should perhaps exhibit a little more of the surface chalking that led to the appearance of a dull grey. But that is a pedantic quibble for a model that is magnificent in its realisation and which in terms of hue is certainly a much better representation than Humbrol 90! 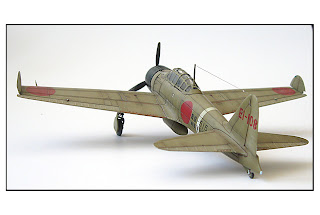 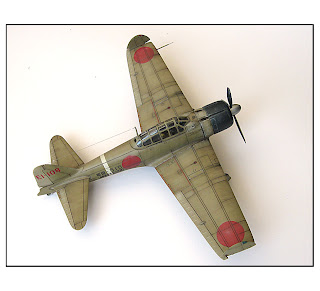 Decals come not from the kit but from the Rising Decals sheet 72-040 reviewed here and are for a Houkokou marked aircraft from the carrier Shokaku engaged during the Guadalcanal campaign in August 1942. It is a delight to see these in situ on the model and the choice is arguably more representative for the A6M2 than Airfix's subject. Overall the result is a very impressive Zero model that reflects great credit to Petr's modelling skill, Rising Decals and Airfix. Thanks to Petr for his kind permission to show the images of his model here. 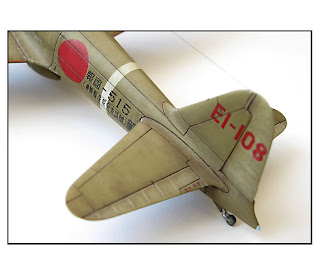 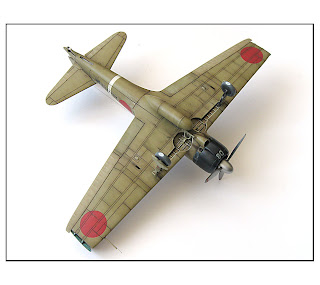 Well; this sort of work cannot be left to stand with 0 comments. Petr's work is several levels beyond my efforts, and I am most impressed with his results. Put this model into a diorama setting and it would be difficult to tell, at first glance, that it was not the genuine article.
Very well done.

Thank you Harold. I was surprised at the lack of comments too.

I have no idea how many hours of work Petr put into this superb model, but a blog post takes anything upwards of about an hour to write and format - and how much time does it take to leave a comment . . .?

Wonderful model, Petr. I've seen this in the box and thought it would make a great model, but the is over the top! I remember seeing that gatefold of this particular plane in the FAOW for the first time, and it is certainly captured here. Thanks...

I agree with the color comments but also agree this is a beautifully rendered model of the Zero. Its amazing what Airfix can give us for about $7! If only they would do things like a Judy, Kate or others. I know its not their style but wouldn't that be great! :)

I love this! I think Petr has created a wonderful depiction of the Zero with great weathering effects, and in 1-72, too! All the more reason to make a comment :)