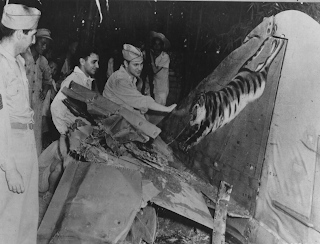 This photograph provides a close up look at the well-fed tiger on the tail of a Dokuritsu 18 Hiko Chutai Ki-46 brought down by the 14th AF in a bamboo grove "somewhere in China". The aircraft appears to have the construction number 2696 and note how the fabric covered rudder appears lighter than the rest of the airframe, similarly to other Mitsubishi constructed aircraft like the Zero. Some more images of this unit's aircraft can be found here. The tigers were painted on each aircraft by an artist H Takaki who lived in Hankow at the time and each one was different. The tiger marking was first adopted by Captain Yoshitsugu Aramaki in April 1939 and painted in the Chinese style on the fuselage of a Ki-15. In 1942 a member of the ground personnel Mamoru Tanaka painted an enlarged version of the tiger on the tail of the aircraft to depict a "tiger running in the skies" and alluding to a Chinese myth where the tiger could roam 1,000 miles in a day and return home. 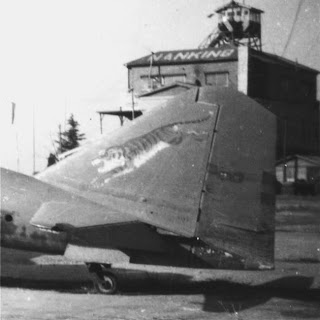 The 18 DHC spent virtually the whole war operating in China with brief detachments in Indo-China from October 1940 to April 1941 and again from March to August 1942. The unit originated in August 1938 from the Rinji (臨時 - temporary or provisional) Dokuritsu No.1 Hiko Chutai which in turn had been expanded from a detachment of two Ki-15 aircraft forming the Aoki Unit which had been created within the Rinji Koku Heidan (Provisional Air Army Corps) in August 1937. On 1st October 1944 it was amalgamated with Dokuritsu 55 Hiko Chutai to become the 82nd Sentai but its aircraft continued to display the tiger insignia until the end of the war, as shown in the image above taken at Nanking sometime after August 1945. Note the differences in style between the two tigers. 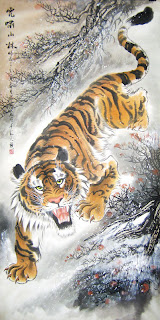 Both the Japanese and Chinese have an ancient saying that tigers can roam a thousand miles and return safely home. In Chinese mythology the tiger also represents courage and valour in battle and is sometimes depicted with wings to invoke its celestial nature as it was once considered to be one of the Four Auspicious Creatures (四神), now supplanted by the mythological Kirin (Qilin 麒麟). The Chinese Goddess of the Wind Feng P'o-p'o (literally "Madam Wind") is also sometimes depicted riding on a tiger across a path of clouds in the sky.
Image credits:- 18th DHC Ki-46 NARA; 82nd Sentai Ki-46 Don Thorpe/Juzo Nakamura via LRA; Tiger Scroll Web
Posted by Straggler 脱走兵 at 08:18

The tigers were subtly to notably different from a/c to a/c, but the pic you have posted here, Nick, reminds me of the one on the decal sheet from the Airfix kit of the 1970s, at least the Craftsmaster version here in the US, which was beautifully done. This really stood out among the Airfix decals of the period that I recall, which could be pretty useless, and this picture may have been the model for it. Thanks for posting!

Thanks Nick, for the history and photos.