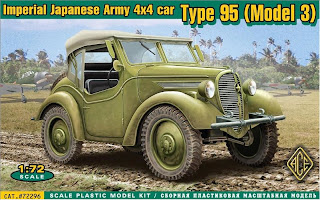 Of potential interest to aircraft modellers who like to present their creations on diorama type bases is a family of the diminutive Type 95 Kurogane scout car kits from Ace Models of Ukraine to 1/72nd scale. In addition to the well-known Model 3 "Noddy car" scout car  - and possibly of more value to aircraft modellers - are a pick up variant with flat bed and a Model 5 utility car. Ace also make other kits of Russian and British staff cars and utility vehicles that could be used as captured vehicles in Japanese aircraft presentations. 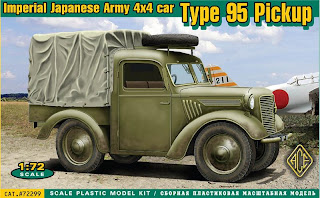 Note that the pick up variant does not come with the cargo bed tilt as shown in the box art. That would have to be scratch built. Each kit contains Army and Navy decals for the radiator grille badges but the mountings have to be cut from templates provided. Templates are also provided to cut acetate film for the windscreen. A useful walk around with photos of an extant Kurogane can be found here. 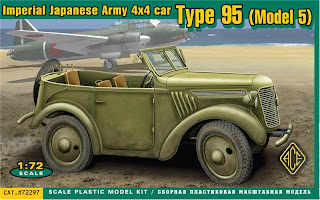 It is a nice little car. Searching for info, I saw that there are a lot of variations between individual cars.
I didn´t know that ACE did the model 5 version. Thanks for the heads up. Nevertheless, the pics I saw show a more rounded rear, like a bath tube.

Very cool and much overlooked as kits! Details about Japanese ground vehicles are pretty hard to find.