What You Can Find When You Are Not Looking For It 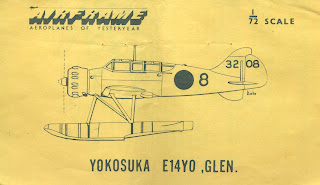 By way of an update to last year's blog exploration of 1/72nd 'Glen' kits here and here it is somewhat embarrassing to find that I did not even mention the Airframe ("Aeroplanes of Yesteryear") vacform kit which I have just discovered lurking inside a plain brown cardboard mailer in my panic inducing stash. It must have been bought in the days when optimism exceeded capability and output, long before the Fujimi Glen came puttering over the horizon in its colourful "buy me" box. This vacform is a very cleanly moulded kit on two thin white plastic sheets with, surprisingly, a thin and very clear canopy that has not yellowed at all. I have no date for this kit but according to the Burns Bible* the company was in business from 1971 to 1989 and was started by John Tarvin at 5209, Rumble Street, Burnaby, BC, Canada. This kit was # 36 in the series. 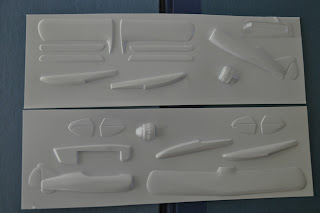 No engine, struts or decals are included which I understand was typical for Airframe vacform kits. The sheet which folded to make the bag header includes instructions, plan views, a schematic of the float struts and a sketch showing the position and colours of the float warning stripes.  For other colour details Donald W Thorpe's book 'Japanese Naval Air Force Camouflage and Markings' is cited. There is also a potted history and list of references for the type as follows:-

This is a neat and good looking kit which deserves a mention for posterity so I have updated the original blog post accordingly.

Miracles do happen!
Two weeks ago somebody offered me a MPM Glen for just €7,00 euro's, this I could not refuse.
Another interesting thing about this plane: A British Pathe documentary on the liberation of Penang shows
some 'detail stills' of a Glen. Search term:
britishpathe.com/video/penang-reoccupied/query/Penang (choose video stills)

Thanks for the notice of the Glen stills, Jacob.