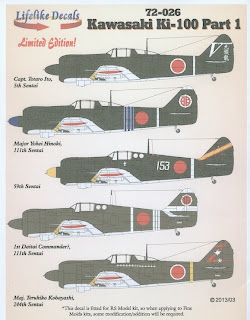 Lifelike Decals have made two very welcome additions to their impressive portfolio of Japanese aircraft subjects with sheets for the Ki-100 and Ki-84 scaled down from 1/48th scale sets. Set 72-026 Kawasaki Ki-100 Part 1 has individual markings for five Ki-100 aircraft together with national markings and stencil details for one. Of note is the fact that the stencils include the 迷彩塗料 cartouche beneath the tail which is usually missed from other kits and decals and hard to replicate, especially in this scale. The subjects featured on this sheet are:-
This decal sheet is designed for the recent RS Models kits and the instructions advise that some adjustment might be necessary if using them on the Fine Molds kit. 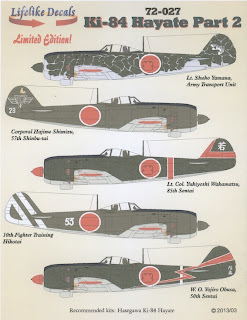 Set 72-027 Ki-84 Hayate Part 2 contains individual markings for five Ki-84 aircraft with national markings and stencil details for one. The sheet is designed to fit the Hasegawa kit. The subjects featured on this sheet are:-
All are excellent and interesting choices. Both Yokiyoshi Wakamatsu and Yojiro Obusa were aces. As usual with Lifelike each set comes with a comprehensive and valuable set of notes for each aircraft, including references for the colour schemes and markings depicted. With special thanks to Keishiro Nagao who kindly supplied the sets.

Thanks for the notice of these, Nick.