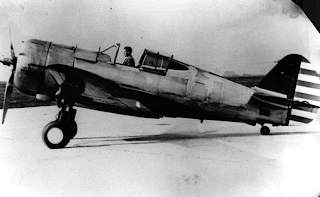 Following on from Part 1 of the Curtiss Hawk Monoplanes for China story, the second Curtiss Hawk 'China Demonstrator' was the H75-Q, sometimes described unofficially as an H75-A5. It was basically similar to the Cyclone engined H75-A4 but with a proposed wing armament of 23mm Madsen cannon in underslung gondolas as trialled in the XP-36F (38-172). Some sources incorrectly refer to it as being a fixed undercarriage design or modified to have a retractable undercarriage and it has also been confused with the earlier 'Hawk Special', the first 'China Demonstrator', in some references.  It was first flown as NX 2208 on 6th October 1938 but delivered to China as the 'China Demonstrator' on 28th November 1938 with the c/n 12898 at a cost of $35,000. Accompanying the aircraft was Curtiss test pilot Bob Fausel together with a CW-21 interceptor NX 19431. The shipping of the two Curtiss designs together has led to some accounts referring to two H75-Q demonstrators being sent to China.

The two aircraft arrived crated in Rangoon and were then sent upriver by boat to Bhamo where Bob Fausel was met by the CAMCO foreman Charles Hunter. The crates were then taken on to Loiwing by truck where the aircraft were assembled in somewhat primitive field conditions using a bamboo constructed gantry to lift the wings to the fuselage. Further work was done inside bamboo matsheds as the CAMCO factory buildings were still under construction. At the time William Pawley of CAMCO was acting as the de-facto agent for Curtiss-Wright in China although their agents are officially listed as Intercontinental Corporation (US) at 353 The Hamilton House, Shanghai. According to Malcolm Rosholt Bob Fausel air tested the H75-Q at Loiwing on 11 February 1939 and on 13 February flew it to Kunming. The aircraft was then flown on to Chengtu on 17 February where armament specialist Rolfe Watson reportedly made modifications for the installation of the Madsen cannon under the wings and test fired them, noting in his diary that it was the first time in history that cannon had been fired from a Hawk 75. However, a photograph of the H75-Q being assembled at Loiwing shows the cannon and gondolas already in situ under the wings. 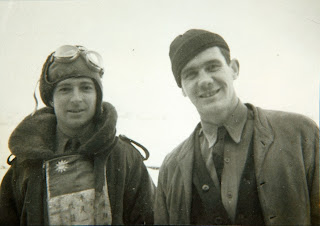 The CW-21 was also taken to Chengtu in less certain circumstances. Meanwhile another ex-14th squadron pilot, George H Weigle, whom Elwyn Gibbon had brought to China from the Philippines was now working for Pawley as a CAMCO test pilot. "Sebie" Smith described Weigle as a "good cow pasture pilot" but with no fighter experience, whilst Chennault rated him as "a very good pilot". On 19 March Weigle flew the H75-Q to Chungking, accompanying Fausel who was flying the CW-21 and a DC-2 carrying Pawley, other CAMCO staff  and two Madsen technicians from Denmark. Photographs from this trip reveal that both aircraft had been camouflaged and displayed Chinese insignia, including rudder stripes. Some time afterwards Weigle flew the H75-Q back to Chengtu. Then on 4 May Fausel telephoned Weigle and asked him to fly the H75-Q back to Chungking and to land it on the airfield at Chiulungpo, on a sandbar on the north side of the Yangtze River at Chungking. When Weigle arrived the city was under attack by Japanese bombers and the smoke and dust obscured the landing strip so he flew the aircraft to Kwangyuenpa, a Chinese fighter airfield about 15 miles from the city. The following day, when he was taking off from the airfield to return to Chungking, he crashed and was killed. Reportedly he had climbed too steeply and stalled the aircraft. 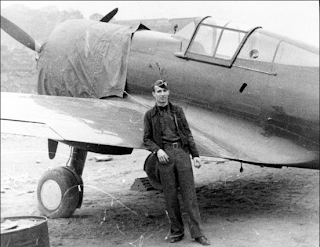 In his memoirs published in 1949 Chennault claimed that Weigle had engaged the Japanese bombers over Chungking in the Hawk, shooting down at least four of them with the Madsen cannon. This claim was repeated in Martin Caidin's book 'The Ragged, Rugged Warriors' (Elselvier-Dutton Publishing Co. Inc. 1966) a book about American pilots "who fought the early air war against Japan", written in somewhat purple prose and which even included an illustration by Fred L Wolff* of Weigle in a fixed undercarriage Hawk making an overhead pass on Japanese 'Nells':-

"A single Hawk fighter rose swiftly from a field on the outskirts of the city. The airplane gleamed in the sun as its pilot, George Weigel (sic), hammered the throttle against its stop to gain altitude as quickly as possible. His aircraft was a modified Hawk 75M, with a heavy cannon fitted beneath each wing." 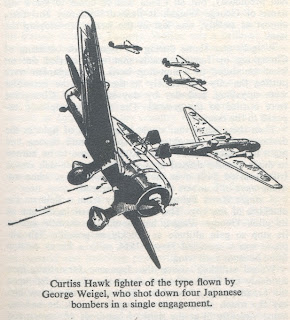 The Beauchamp/Cuny book states that an American pilot flew the Hawk "Interceptor" against Japanese Fiat Br.20 bombers on 3 May, firing at one of them at long range. However, Fausel flew to Kwangyuenpa in the CW-21 to inspect the wreckage of the Hawk H75-Q and according to him the Madsen cannon had not been fired. The remains of George Weigle were returned to Chungking by the US gunboat Tutuila and he was buried there in the International Cemetery. During its evaluation in China the Hawk was flown in comparison trials against  the I-15, I-16 and Dewoitine D-510C. It is possible that the Hawk combat story had been confused with an earlier combat in February 1939 in which a Hawk had reportedly participated and during which Captain Shen Tse-Liu of the 17th PS shot down the lead Japanese bomber whilst flying an I-15bis. In November 1939 Captain Shen in a Dewoitine 510 shot down with cannon fire a G3M bomber being flown by the leader of the 13th Kokutai.

The unfortunate crash of the H75-Q was not the end of the Chinese Curtiss Hawk connection. Afterwards the Chinese Nationalist government contracted Curtiss-Wright for one complete Hawk H75 and parts for 49 more to be assembled in China by CAMCO. According to Beauchamp/Cuny the production version of the H75-Q was to be the H75-A5, an example of which was completed in 1940 to serve as the pattern aircraft for the CAMCO production. After the bombing of the CAMCO factory on 26 October 1940 and with the agreement of the Chinese government everything was shipped to Bangalore in India where Pawley had set up the Hindustan Aviation Company to build 48 Hawks under contract for the Indian government! Were the same Hawks sold twice or was the Chinese contract cancelled and taken over by the Indian government? There is considerable obscurity about the Hawk aircraft assembled there but the first H75-A5 was reportedly not test flown until 31 July 1942. However, Derek Wicks of 5 Sqn RAF recorded flying an unpainted "silver" Hawk 75 with the RAF serial AX 799 at Risalpur on 30 November and 1 December 1941, which is believed by some to have been the original H75-A5 pattern aircraft. Air Britain lists AX 799 as a "believed ex-Hindustan Aircraft order for China" and records its service as being at 308 MU (Maintenance Unit), 151 OTU (Operational Training Unit) and 5 Squadron, RAF where it swung on landing after an undercarriage collapse on 7 July 1942.

The Hawk H75-Q was painted overall in a slightly glossy olive green with Chinese insignia, including blue and white rudder stripes and under wing 'white sun in blue sky' roundels. It is not certain whether the roundels were painted on the wing upper surface. The profile above, kindly provided by Seweryn Fleischer of Wydawnictwo Militaria is the best and most accurate depiction of the appearance of the Hawk H75-Q to date.

AFAIK there are no kits of this actual aircraft. It is basically a Cyclone-engined H75-A4 with underwing Madsen cannon. In 1/72nd scale the cannon could be obtained from the Special Hobby H75-M kit or scratch-built. Airwaves produce an excellent 1/72 Cyclone engine/Mohawk IV resin conversion for a suitable P-36 such as the Monogram kit but it seems to be available only intermittently from Hannants. 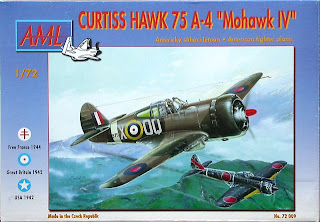 AML produced a limited run Curtiss Hawk 75-A4/Mohawk IV but it is not that easy to find and is a difficult build. There is supposed to be a new Cyclone engine Hawk/Mohawk IV kit on the way from AZ Models. 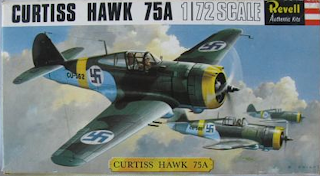 Long ago Martin Caidin's book and the sudden and surprising appearance of the Revell blue swastika adorned Curtiss P-36/Hawk 75 (above) were an inspirational revelation to someone whose technical finesse then stopped at H75! I still think Revell's P-36 makes a rather neat little model. 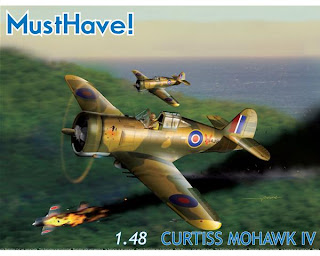 In 1/48th scale Hobbycraft of Canada issued a Curtiss Hawk H75-A4/Mohawk IV and this has been re-released by Academy and more recently by Musthave. The unused cannon from their H75-M/N/O kit could be added to this.

* Fred L Wolff illustrated other books for Caidin and appears to have specialised in science fiction and hypothetical aerospace art and technical drawings.

Nick, thanks much for this wonderful pair of articles on the Chinese H75. I've always been a fan of the aircraft and it is wonderful to learn more of this obscure corner of its history.

thanks for this awesome piece of research!!!!!!!
The P-36/H75 Hawk deserves to be re-evaluated for his obscure operational use during WWII in less known theatres of operations.
In my opinion the aircraft exploits in Burma are simply amazing.

Thanks for doing the research to pull all the data together, Nick.