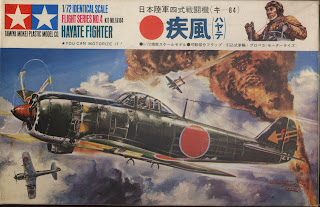 When the first 1/72nd scale Ki-84 was issued by Tamiya in 1964 as No.4 in the 'Flight Series 72' series of kits intended to be motorised there was, typically for Japanese kits at that time, minimal consistency in the action-packed box art by S Komatsuzaki, the decal sheet and the instructions. The box art depicted an aircraft of the 101st Sentai in combat with P-38s, wearing an ambiguous dark olive green over what appears to be natural metal. An interesting detail is the Ki-84 in the background which is peeling away with what appears to be a bomb under its starboard wing.  And indeed the kit only contained one droptank and one bomb! The ends of the box displayed the colour profile of a mottled Hayate of the 52nd Sentai. 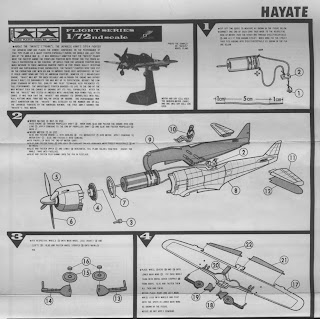 Battery (and electric motor) not included!

Inside the compact box the instruction sheet, provided as two separate sheets in Japanese and English (above), included a remarkably detailed presentation of the markings of five Hayate-equipped Sentai including the 52nd Sentai example on the box ends but not the 101st bird on the box art! The small decal sheet provided only options for the 52nd Sentai and 73rd Sentai, both tail markings in plain white. Dark brown was suggested as the colour for the propeller and spinner rather than the grey-green of today's convention. Model Art # 283 on Hayate included a chip for the prop colour that was close to Munsell 10 GY 3/2.  This colour had been recorded by Ichiro Hasegawa from Tadamitsu Watanabe, but Kenji Ishikawa who provided input to Model Art # 329 did not concur with that colour. Noboru Shimoune prepared some samples of late war colours, recording the grey-green prop colour as Munsell 5 GY 3.5/2.3 and used on Ki-84, Ki-87, Ki-43 III Ko, Ki-94, Ki-100, Ki-102 and Ki-106. FS 34082 is usefully close to that colour @ 1.87 where <  2.0 = a close match. 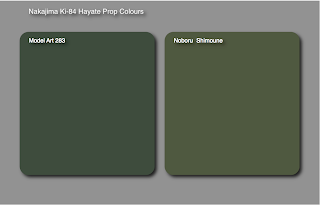 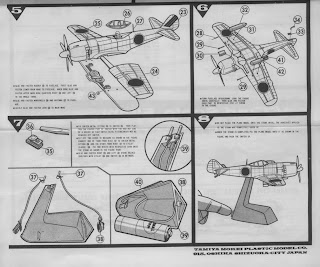 Tamiya's Hayate (疾風 - Hurricane - literally rapid wind  but usually translated as Gale) was not one of their better 1/72nd kits, even in the context of its vintage. The cowling was a rather heavy and slab-sided moulding with a heavy lower profile that is strangely reminiscent of the Ki-87. The faults were somewhat redeemed by the separate working flaps and retractable undercarriage - even the small inner doors opened and closed but were fiddly to instal. The Revell Ki-84 (of which more anon) was issued in the same year and, whilst not without its own faults, was somehow a more appealing kit with its superbly evocative Brian Knight box art, displayable engine, sliding canopy and one of the best pilot figures ever moulded. 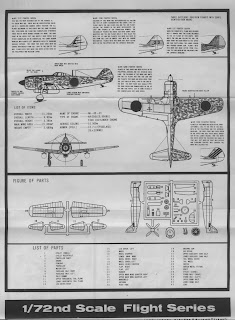 Through the kindness and generosity of Joern Leckscheid I was introduced to the catchy 'Song of Hayate Fighter Squadron' over a decade ago. Sit back and enjoy the spectacle of a quartet of Hayate, each in a different colour scheme, rolling down the runway at Akeno for a formation take-off and then making a low pass with the reverberating thunder of their not always reliable Ha-45 engines accompanying that stirring song. You'll probably be humming it for the rest of the day and fishing a Hayate in your preferred scale out of the stash! 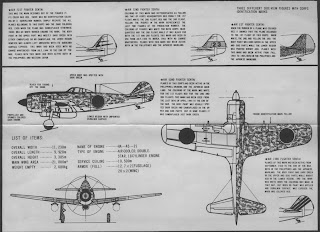 Thanks for posting about this old kit as an in-box review. I had never seen it before.

A long shot, I know, but are there any existing relics that might bear the propeller color in question here? As many were probably removed from aircraft at the surrender, it's surprising that none seem to have survived.