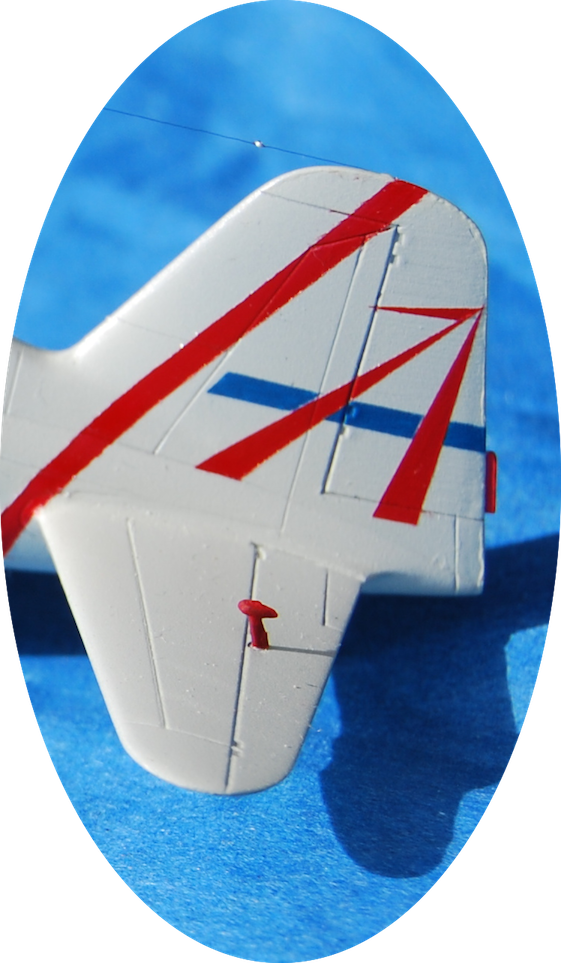 The 17th Independent Air (or Flying/Flight) Squadron (in Japanese Dokuritsu Hiko Dai 17 Chutai - 独立飛行第17中隊 - literally Independent Air No.17 Squadron) had its origin in the 101st Independent Air Squadron established in Japan in July 1941. The unit was originally equipped with the Type 97 Headquarters Reconnaissance Aeroplane (97 Shiki Shireibu Teisatsu-ki - 九七式司令部偵察機) known as the 97 Shi-tei (九七司偵) and usually referred to in the West as the Ki-15 'Babs'. The unit marking was a stylised bird silhouette in black or red superimposed on a broad white  horizontal band across the fin and rudder. The Flight (Shotai - 小隊 - usually three aircraft) and aircraft number within the Flight were indicated by a coloured star on the rudder for the Flight leader and one or two diagonal stripes painted on the fin for the second and third aircraft in the flight.

Following the Doolittle raid on Japan in April 1942 the air defence capability of the homeland was urgently reviewed. The 17th Air Brigade (Hiko Dan - 飛行団) was established  on 30 April 1942 to provide air defence of the Kanto sector, which included the Imperial Palace, the Tokyo-Yokohama area, Tachikawa and other vital points. The new Air Brigade comprised the 244th and 5th Air Regiments (Hiko Sentai - 飛行戦隊) both initially equipped with Type 97 fighters (Ki-27 ‘Nate’), the 4th Independent Air Squadron equipped with Type 2 two-seat fighters (Ki-45 ‘Nick’) and a Brigade Headquarters Reconnaissance Squadron which was to be the 101st.

In August 1942, following assignment to the HQ of the 17th Air Brigade, the 101st was formally re-designated as the No.17 Air Brigade Headquarters Reconnaissance Squadron  (Dai 17 Hikodan Shireibu Teisatsu Chutai - 第17 飛行団 司令部 偵察 中隊) and began operating a mix of 97 Shi-tei  aircraft together with the elegant twin-engined Type 100 Headquarters Reconnaissance Aeroplane (100 Shiki Shireibu Teisatsu-ki - 百式司部偵察機)  known as the 100 Shi-tei (百式司偵) and usually referred to in the West as the Ki-46 ‘Dinah’. The role of the unit, based at Chofu and under the command of Capt Takahiko Yasuda, was long range air defence reconnaissance for the Kanto sector, conducting continuous sector patrols of the approaches air space, reporting incursions in co-operation with coastal radar units and then tracking enemy formations to provide a running commentary on their type, number, altitude and heading to facilitate  interception by fighter units. Each sector patrol was usually flown by a flight of three aircraft, one of which would be assigned to track any observed incursion by an enemy bomber formation whilst the others continued to patrol. Although an organic part of 1st Air Army the 17th Air Brigade was under the operational control of Eastern Army Command for air defence purposes. In January 1943 Capt Kitagawa who had previously served with the 81st Sentai took over command of the reconnaissance unit.

With re-assignment as a brigade HQ squadron the marking of the unit changed to a stylised ’17’ in red laid over a horizontal bar in cobalt blue symbolising the coastline and the headquarters status of the unit (cobalt or sky blue was the arm of service colour for Army Air and was usually used to denote command status).  Stars and diagonal stripes continued to be used to indicate aircraft within Flights but this system was later simplified to display one to three coloured horizontal stripes painted on the rudder. 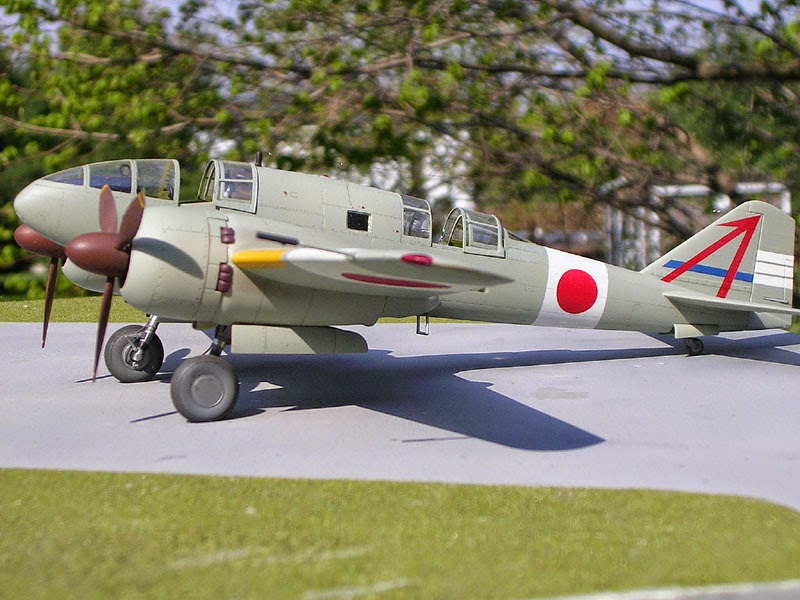 On 10th March 1944 the 17th Air Brigade was re-organised and expanded to become the 10th Air Division (Hiko Shidan - 飛行師団) under the temporary command of Maj Gen Shoichi Sato, with a strength of six fighter regiments and one independent air squadron. At the end of March the 17th Air Brigade’s former HQ reconnaissance unit was re-designated as the 17th Independent Air Squadron (Dokuritsu Hiko Dai 17 Chutai - 独立飛行第17中隊), the title by which it is best known in Western documentation and depictions. In May 1944 the 10th Air Division Division was transferred from 1st Air Army to the direct command of the C-in-C of the General Defence Command (GDC) but with operational control remaining with Eastern Army Command. 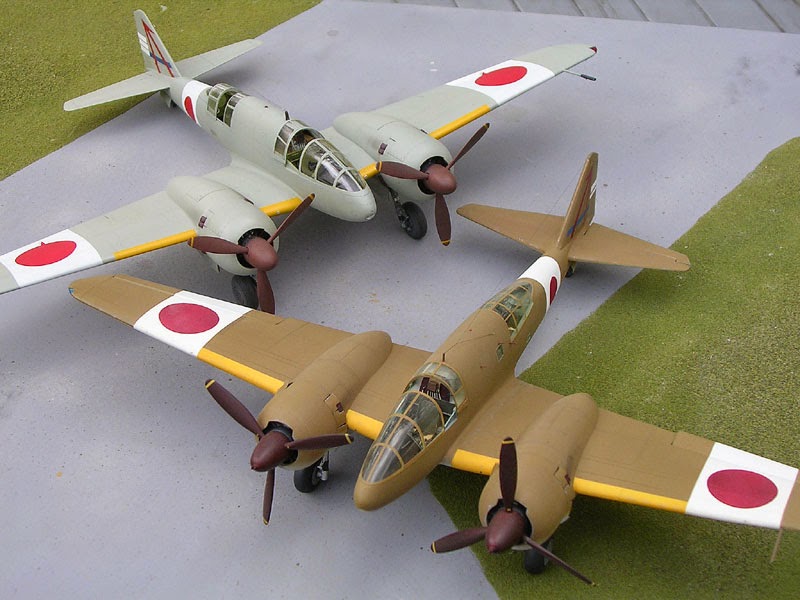 At that time the 17th was rated as a unit of average ability and listed as having no less than fifty 100 Shi-tei aircraft of which about half were capable of Ta-Dan air-to-air bombing, as well as a few fighters of an unspecified type. The strength of the squadron was remarkable, on a par with that of a fighter sentai, and it was formed into two sections, a reconnaissance section and a fighter section equipped with the Ta-Dan capable Ki-46 aircraft. The selection of the Ki-46 to pioneer the Ta-Dan bombing  technique against the expected B-29 formations was based mainly on its status as the fastest climber and best high altitude performer in the Army’s air arsenal, a performance proven in competing trials and tests with fighter types. The Ta-Dan tactic involved dropping canisters of small cluster-type bombs in the path of the B-29 formations. 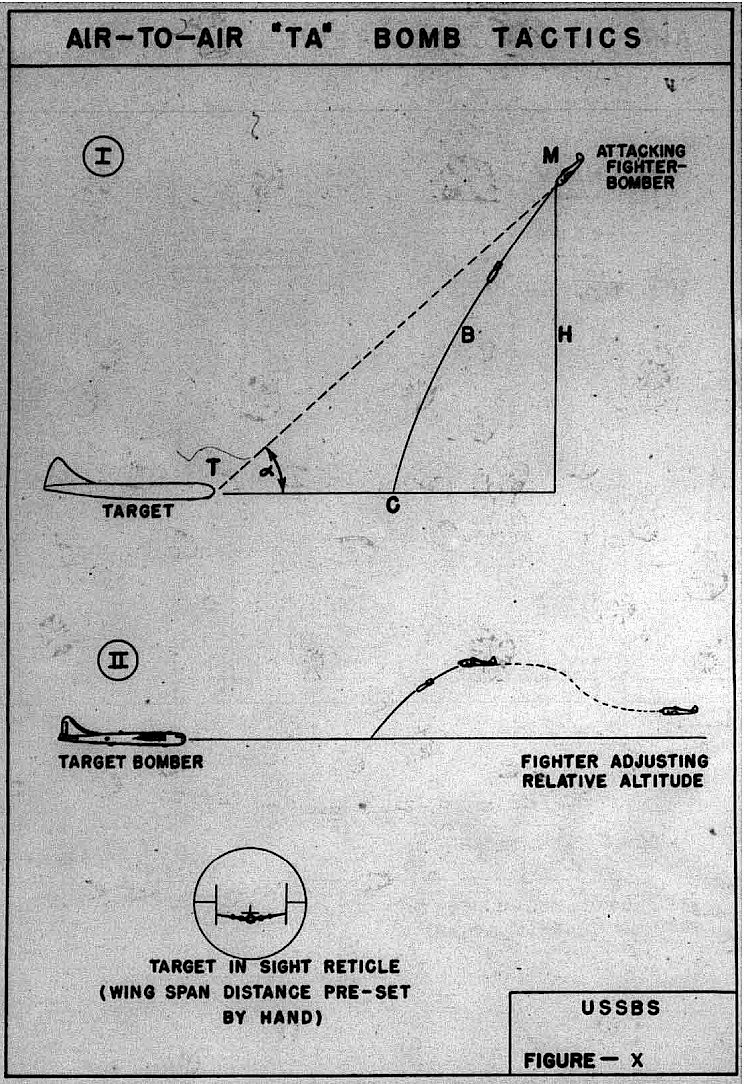 Once the B-29 raids got under way the fighter strand to the 17th’s story expanded and developed. Whilst the Ta-Dan tactic proved ultimately disappointing, the speed, climb and altitude capability of the Ki-46 continued to be exploited by adapting officially sanctioned cannon armed variants to conduct the preliminary interceptions in an attempt to break up the intruding bomber boxes. However, unlike other units within the 10th Air Division, the 17th was not required to establish air-to-air ramming flights. The first armed versions of the Ki-46 flown by the 17th had the fuselage fuel tank removed and either one or two 20mm machine cannon installed in its place to fire obliquely from a position below and behind the target bomber. In the fall of 1944 the engineering section of the 17th managed to install a 37mm cannon in the oblique firing position and subsequently six Ki-46-II and a single Ki-46-III were converted to this heavier armament.

Successful experimentation with armed variants of the Ki-46 culminated in development of the purpose-built Ki-46-III interceptor, which was far from being just an expedient stop-gap fighter as so often asserted. This aircraft had a long formal title - Hyakushiki San-gata Shireibu Teisatsu-ki Kaizô Bôkû Sentô-ki (百式 三型 司令部偵 察機 改造 防空 戦闘機 - Type 100 Model 3 Headquarters Reconnaissance Plane Remodelled Air Defence Fighter) sometimes abbreviated to Hyakushiki San-gata Bôkû Sentô-ki (Type 100 Model 3 Air Defence Fighter). The original version armed with just two Ho-5 20mm cannon in the nose intended to augment the Ta-dan capability was projected as the Ki-46-III Otsu whilst the addition of the oblique Ho-204 37mm cannon was projected as Ki-46-III Otsu + Hei.  The 17th claimed victories against the B-29 in the new interceptor with cannon and Ta-Dan attacks but the promise of the fighter Ki-46 was largely overtaken by events as the B-29 offensive switched to low altitude night bombing and long range and naval task force deployed American fighters began daylight incursions over Japan.

In March 1945 the 17th were assigned to the newly established 30th Fighter Group (not to be confused with the 30th Sentai), a late war composite group (first formed to augment fighter capability in the Philippines campaign) consisting of 47th (Ki-84) and 244th Air Regiments (Ki-100), Shimoshizu Air Unit and 17th Independent Air Squadron, plus three heavy bombers from the Utsunomiya Air Instruction Division and two navigation air squads to provide navigational assistance. This second incarnation of the 30th was to provide escort capability to the 18th, 19th, 25th, 45th and 47th Shimbu tai special attack units and to take over the duties of 6th Air Army in defending the Kanto Sector when the 6th Air Army was re-deployed to oversee the Ryuku Islands defence operations. In July 1945 the 17th Independent Air Squadron was re-designated the 17th Independent Air Group (Dai 17 Dokuritsu Hikotai -  第17独立飛行隊). 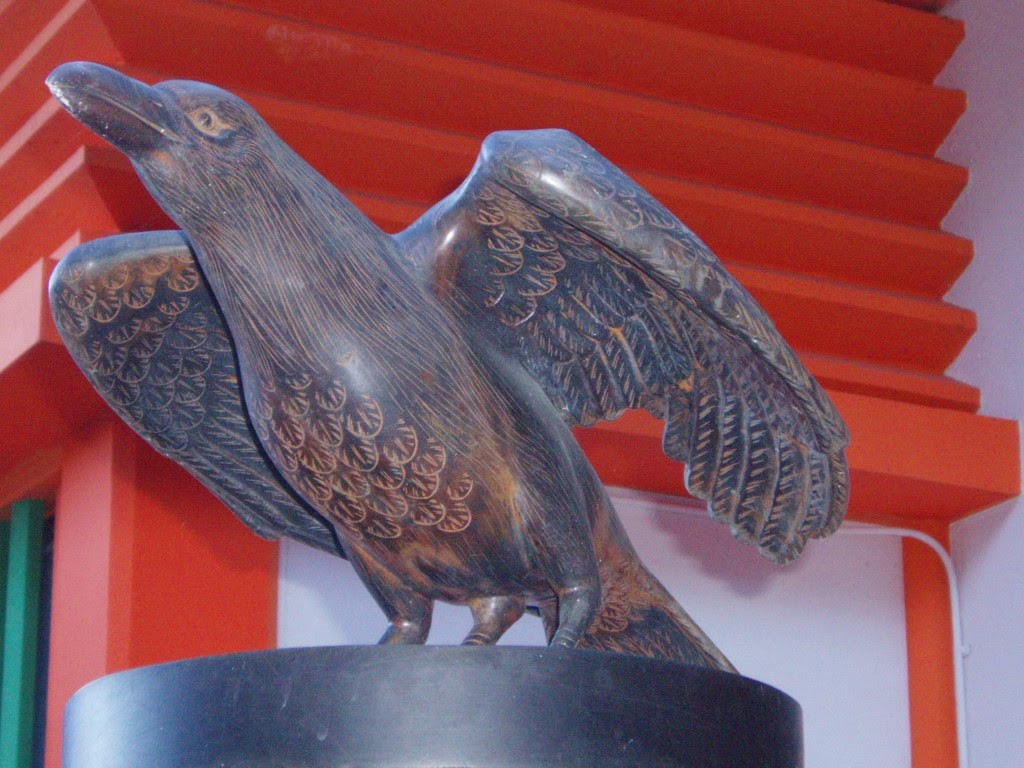 The 30th Fighter Group was considered part of the mobile air defence forces required to respond to an invasion attempt against the homeland but after the implementation of the Sei Go (Control) operation in July 1945 its composition changed and by August 1945 it consisted of 59th and 244th fighter, 62nd bomber and 17th Independent Air Group,  reverting under the command of the 6th Air Army and deployed in the Western Sector of Japan. With assignment to the new unit the 17th changed its tail marking to a black three-legged crow - Yatagarasu - set against an orange disc representing the sun. The marking was designed for the unit by the artist Fumino but was applied to only a few aircraft, the majority retaining the former unit insignia or none at all. In Japanese mythology the three-legged crow was associated with divine guidance of the Emperor Jimmu on his journey from Kumano to Yamato but a full exploration of the whys and wherefores of this mythical bird would require another article in its own right. 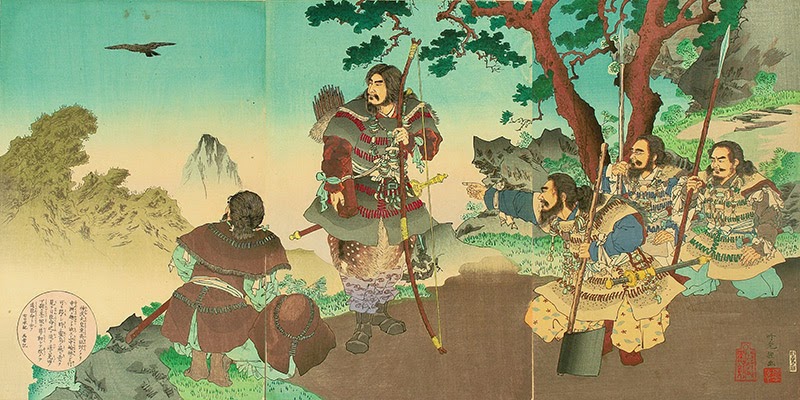 Yatagarasu guides Emperor Jimmu on his journey from Kumano toYamato

For further details and data regarding Ta-dan equipped Ki-46 interceptors and units please refer also to this series at j-aircraft.com by Jim Lansdale.

This is an enhanced version of an article by the author first published in The Flak Sheet, the newsletter of IPMS North Central Texas - with thanks to Mark Smith for suggesting and inspiring it; Model photographs courtesy of Mark Smith; Ta-dan schematic from Japanese Air Weapons and Tactics, USSBS, Miiltary Analysis Division, 1947; Image of carved Yatagarasu via Green Shinto;

As always Nick, thank you for posting this great article. One of my favorite topics!