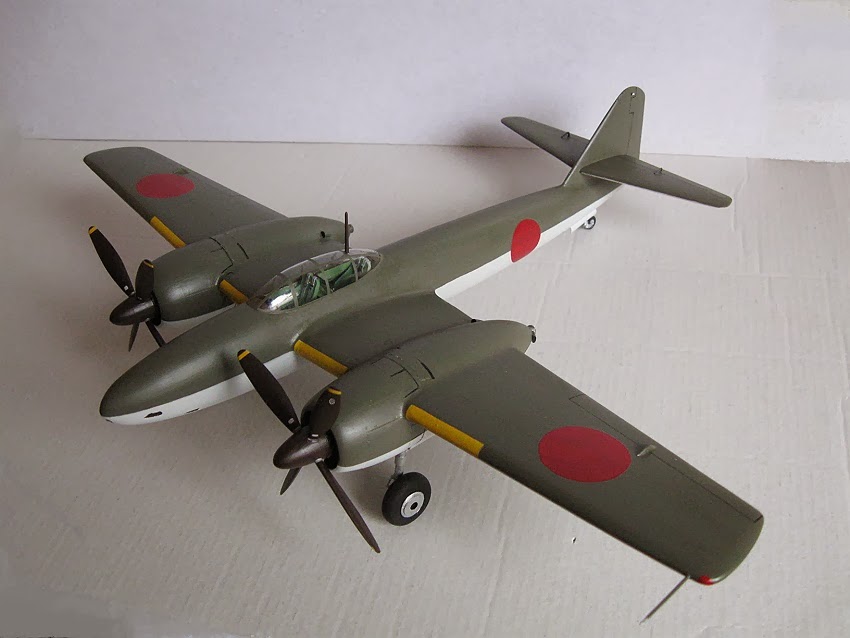 Here is another beautiful 1/48th scratchbuilt model by John Haas featuring the elegant Mitsubishi Ki-83. This one is a 'delayed action' feature presented here long after John sent me the photographs due to an extended senior moment. It has been lurking behind the scenes as a draft article awaiting some Japanese documentation with your host 'dumb and happy' in believing that he had already posted it. 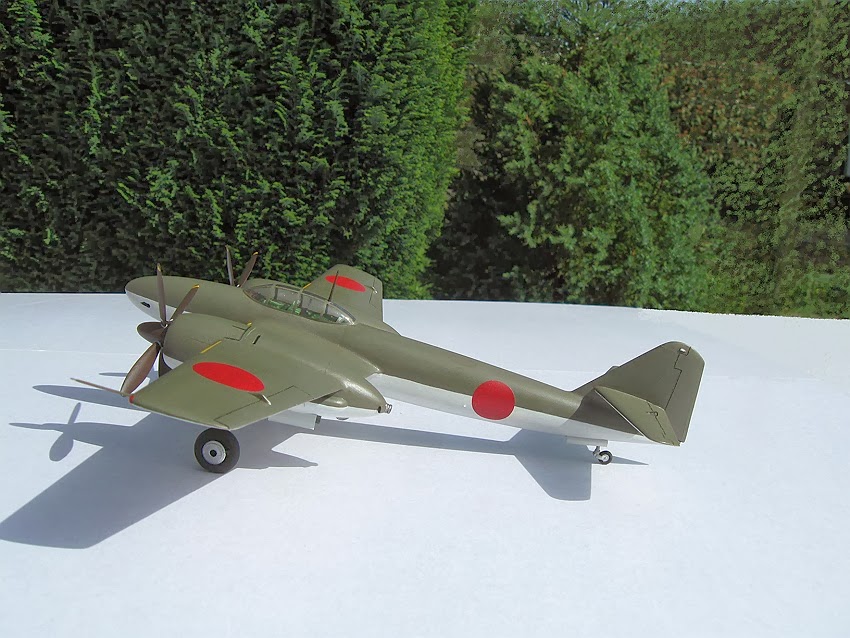 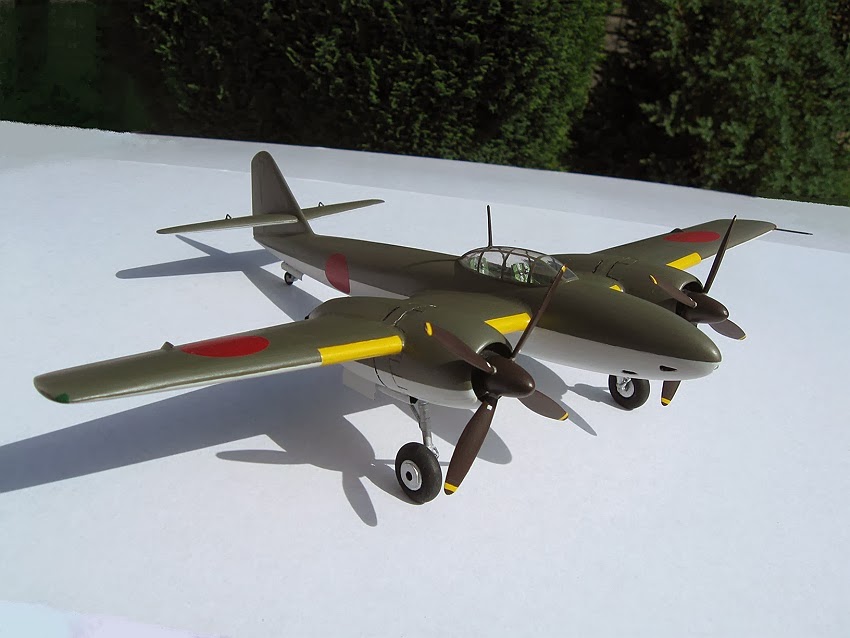 The fuselage and wings are made of solid woodblock, whilst the empenage and smaller parts are made of plastic rod and sheet material. The upper surface was painted in Humbrol Authentics HJ3 A3 Green (see here for an explanation of the origin of this paint colour not to be confused with Thorpe's A3) whilst for the under surface John used Polly-S Acryl Light Grey A/N 2 based on the light appearance seen in photographs. John estimates that his models take an average of about 2 months to  complete, spending 2 hours each evening and longer at the weekends. 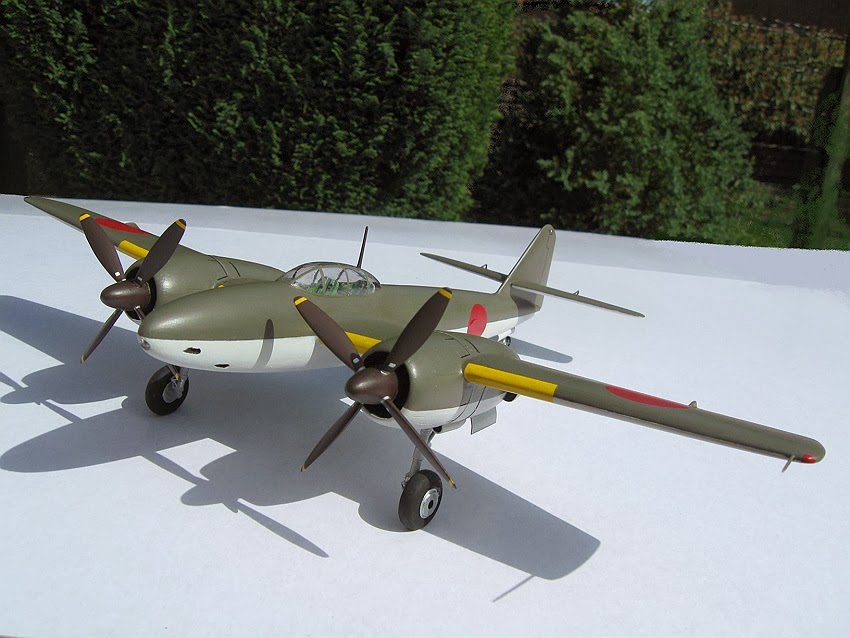 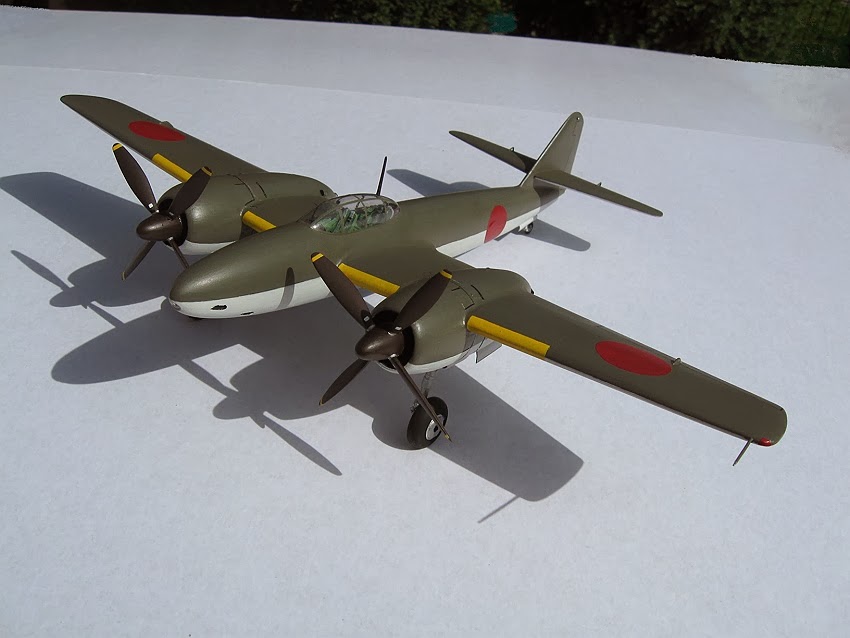 Mitsubishi's Ki-83 was developed in response to a 1943 Army specification for a two seater fighter capable of operating at high altitude and long range. Although sometimes described as a 'heavy fighter' or 'long-range escort fighter' in English the Japanese designation was 'experimental long-range fighter' (試作遠距離戦闘機). The design had a troubled development and its first flight did not take place until November 1944.  It was the fastest of all wartime Army fighters achieving 686 kph (426 mph) at 8,000 m (26,000 ft) with remarkable agility for a twin-engined design. Post-war American testing with high octane fuel pushed the speed to 762 kph (473 mph) at 7,000 m (23,000 ft). Some ambiguity persists as to how its envisaged role was gradually modified during development and especially the role of the second crew member 'buried' in the rear fuselage, originally tasked as a navigator. Armament consisted of two 20mm Ho-5 and two 30mm Ho-105 cannon  installed in the nose. 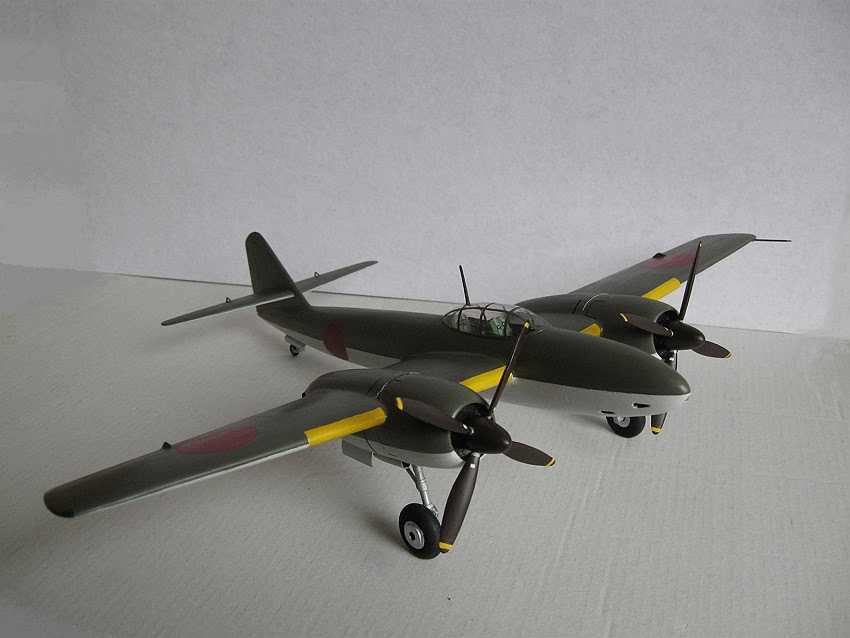 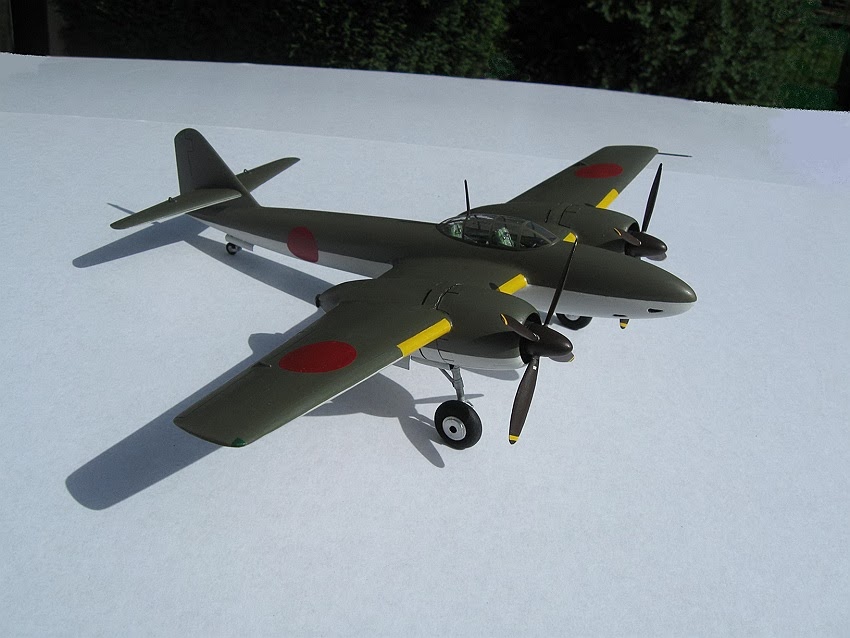 In total four prototype aircraft  were constructed but production plans were never realised and the original concept had been overtaken by events. Further development as a long range attack aircraft with a bombing capability was planned as the Ki-103 and a camera-equipped reconnaissance version intended to replace the Ki-46 as the Ki-95 but neither concept progressed beyond the design stage. 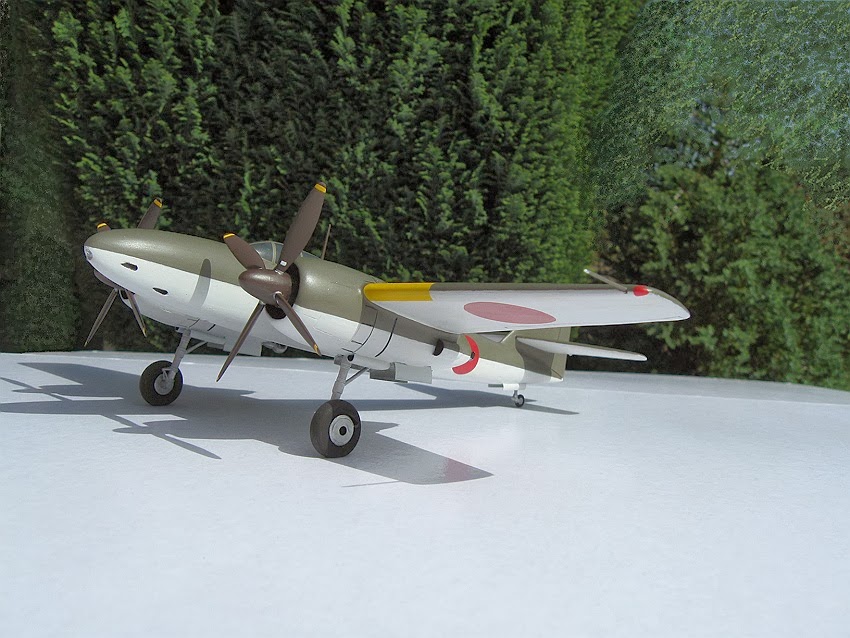 I'm not aware of any injection moulded kits of this type in 1/48th scale but a 1/72nd kit was issued by MPM in 2000 and then re-issued under the Special Hobby label with spurious 'what if' box art and markings. Calin Ungureanu's build of the MPM kit can be found here. 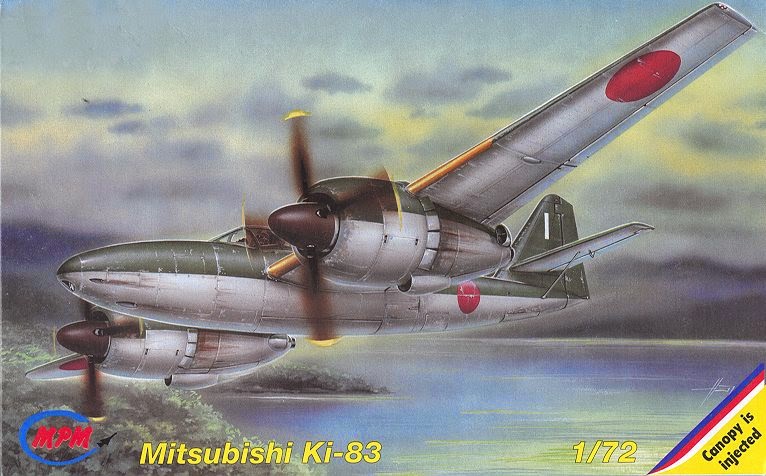 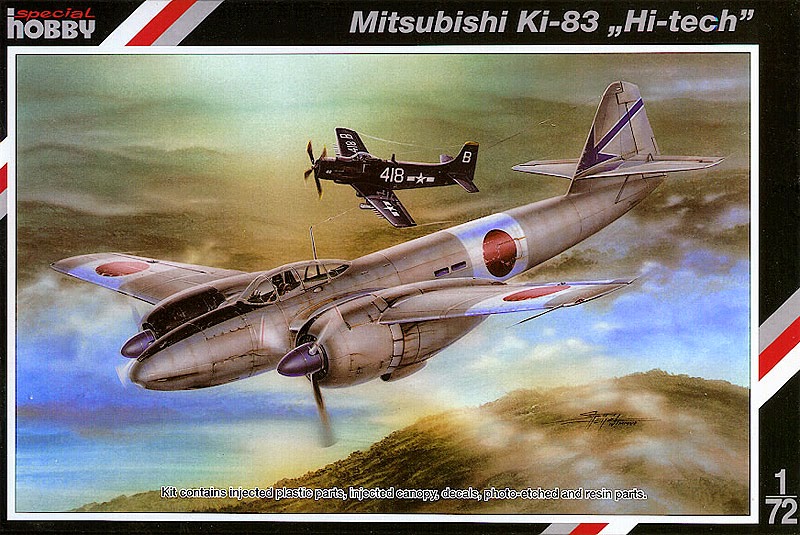 I always loved this colour scheme. It was the inspiration for the scheme I put on the Ki-98 that features on the cover of Midland's "Japanese Secret Projects".

Thanks for posting pix of your model, John.

Beautiful work, thanks for posting.

John, Of all your work I have seen so far on the blog, this is my favorite. What mix used for the topside color? More please, and thanks NIck, for letting us see it.

John has asked me to include the paint colour information in the blog article, which I shall do.

Thanks to all for commenting.

I did once build a DFS german glider from wood and find out how hard it is. What you did there, all those clean surfaces... must be very time and nerve consuming. Any luthier (violin maker) would be proud of such an work.

What a beautiful model, John! I admire your skills, they are at a level I can only dream about. (Any time I try woodworking, the result usually includes stitches.)

The Special Hobby Ki-83 kit (mentioned at the end of the blog post)includes markings for the US Army, stating that these were applied for a flight by a Lt. Henry from Matsumoto Airfield, Nagano Prefecture, at the end of August 1945. Are these authentic markings?

It also includes the markings for the first prototype, flown by Mitsubishi test pilot Lt. Umekawa at the end of November 1944. And, of course, the spurious "Tokyo Defense 1946" scheme.

Since the S-H kit adds photoetch and some nice resin details, I would prefer it over the original MPM boxing, assuming you can find either one of them!