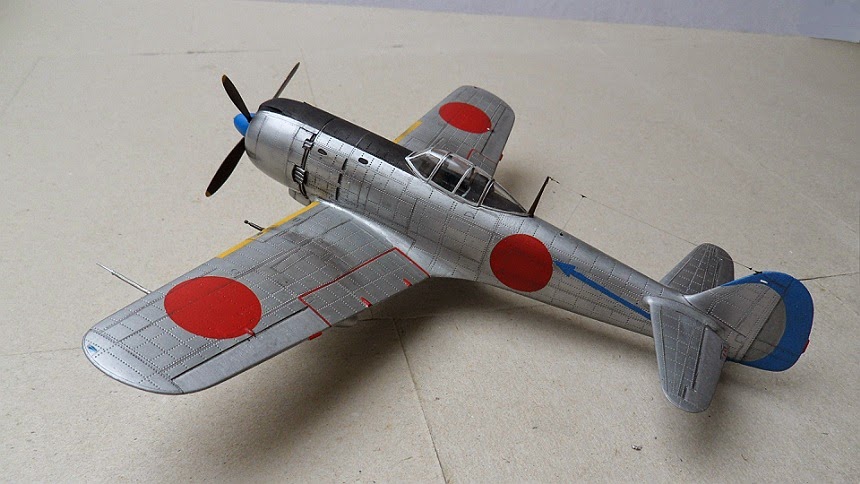 Prompted by the blog series on Hayate colour schemes John Haas has very kindly photographed his trio of Otaki Ki-84 Hayate builds for Aviation of Japan. In pre-internet days these models were inspired by the Aircam Aviation title on Hayate and Donald W Thorpe's seminal 'Japanese Army Air Force Camouflage and Markings'. This natural metal Ki-84 of the 29th Sentai was finished in Rub'n'Buff Sterling Silver over a base coat Polly-S Dark Grey. 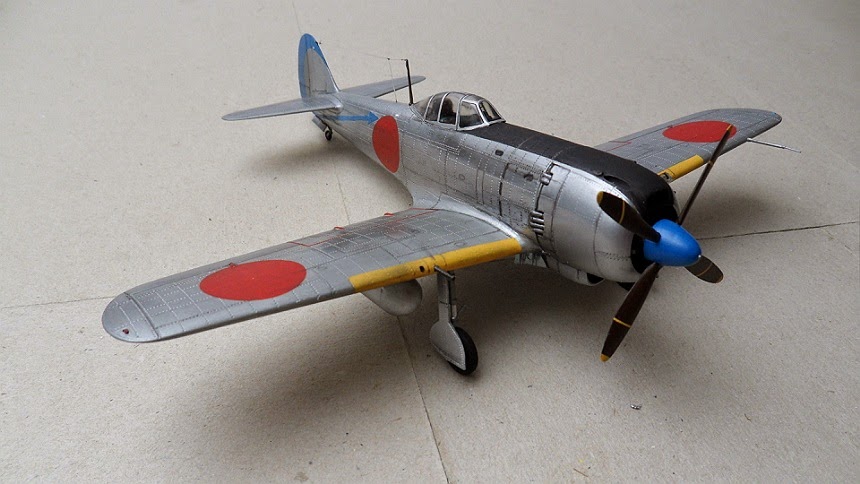 The 29th Sentai originated in July 1939 as a mixed two Chutai unit operating both Type 97 recce (Ki-15 'Babs') and Type 98 Chokkyo (Ki-36 'Ida'). In March 1941 the 1st Chutai was transferred to the 28th Sentai and a new 1st Chutai formed with the Type 97 light bomber (Ki-30 'Ann'). In July of that year the unit became the 29th Dokuritsu Hikotai as a HQ unit with its 1st Chutai becoming the 87th Dokuritsu Chutai and its 2nd Chutai becoming the 66th Dokuritsu Chutai, both units being deployed in China on ground support operations. In July 1942 it was transferred to the 2nd Air Army in Manchuria taking up residence at Hailin. In February 1944 it was re-organised as a fighter unit, at first with the Type 97 fighter (Ki-27 'Nate') to provide conversion training and then the Type 2 single seat fighter (Ki-44 'Shoki'). It moved to Taiwan (Formosa) in July 1944  as part of the 13th Air Brigade (together with 30th and 31st Sentai) with the bulk of the 2nd Air Division in preparation for the defence of the Philippines. After a tour of operations over China from August to October in that year it was sent to the Philippines in November. It began to re-equip with the Ki-84 in December 1944 but was badly used in the Philippines and withdrew to Taiwan in January 1945. 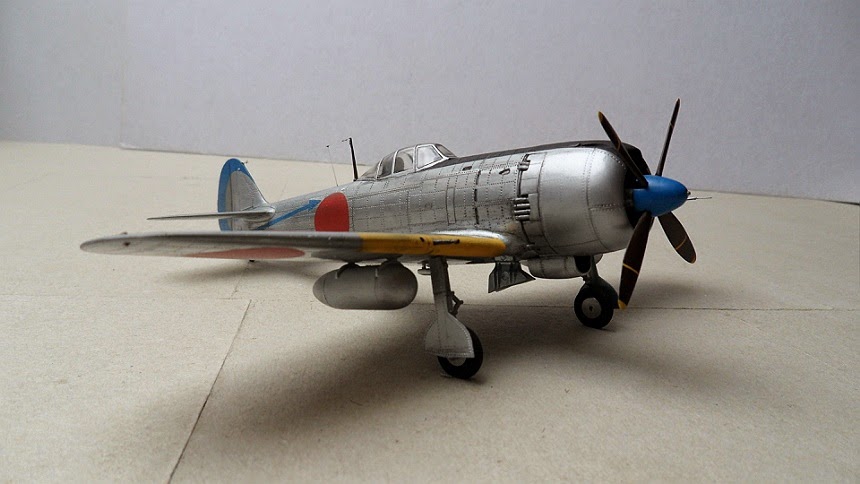 The Otaki kits from the mid-1970s were considered advanced at the time with their finely recessed surfaces and interior details. They had a minimum of parts, eschewing the moveable gimmicks and motorisation favoured by other Japanese manufacturers. Other features were their clean moulding, ease of assembly and relatively inexpensive cost. An Otaki Hayate in my own collection was bought in Hong Kong in the late 1970s for HK$9.90 (about £0.80p or US$1.27). Current releases, re-issued under the Arii brand retail for approx £4 or US$6 in Japan and are intermittently available at a 20% discount from HLJ - a real bargain and an excellent antidote to AMS or for painting/spraying practice. The main failings of the Otaki kits are shallow wheel wheels and rather chunky 'armchair' pilot's seats that seemed to be based on a single design fabricated from boilerplate on Clydeside. But to be fair at the time they first appeared many manufacturers were still producing kits with open see-through wheel wells. 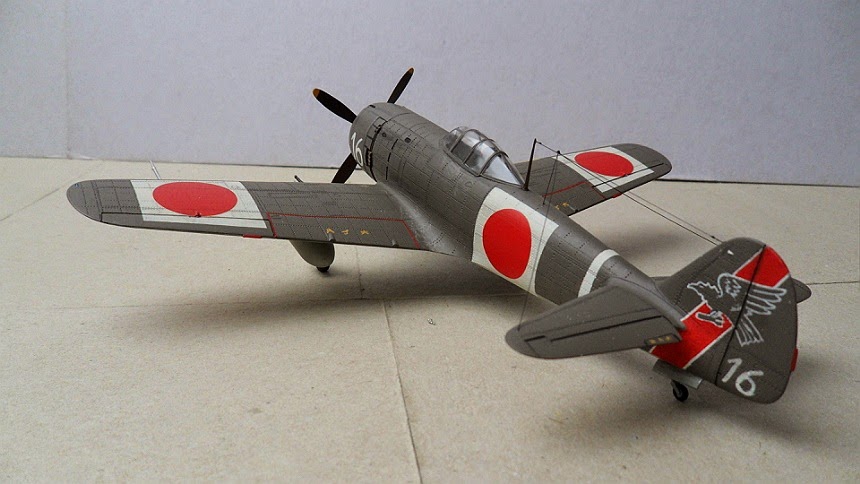 In the absence of a decal sheet John hand painted the bomb-carrying hawk tail emblem on the tokkô tai Ki-84 '16' from the 520th Rinji Bôju Sentai referring to an illustration in one of the Aircam titles. 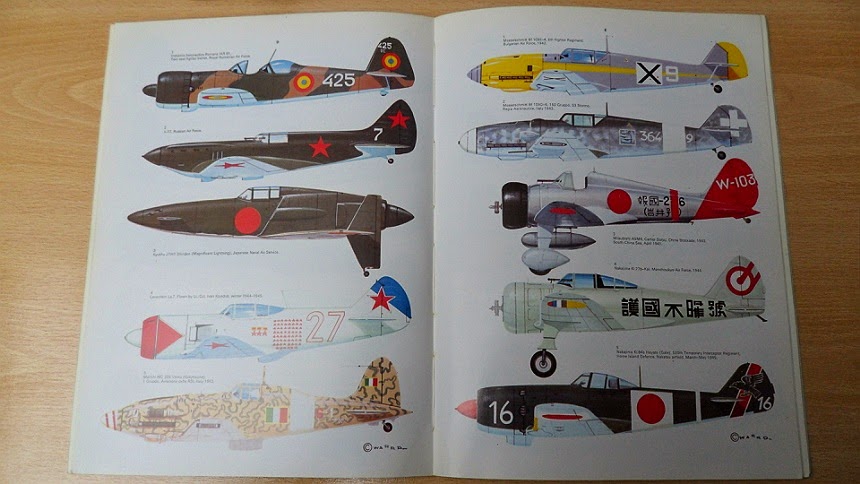 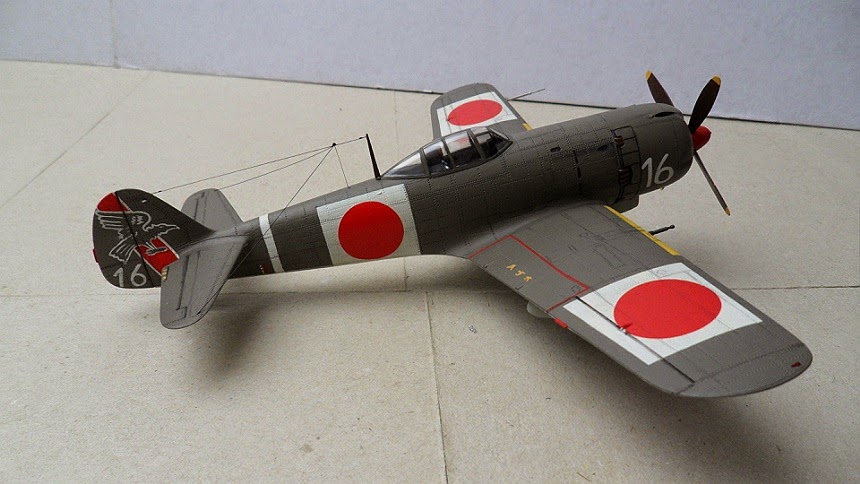 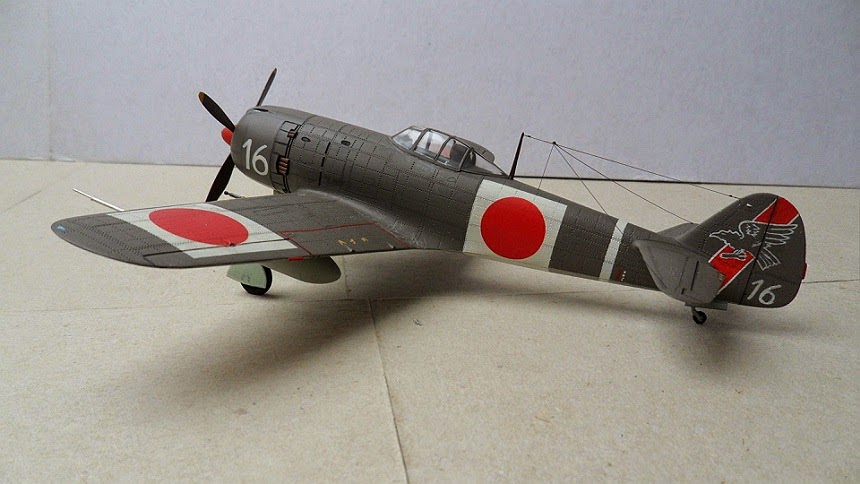 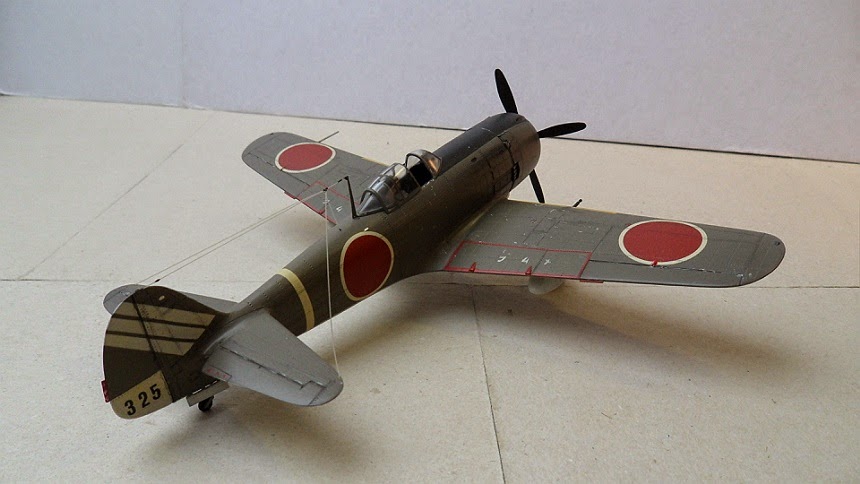 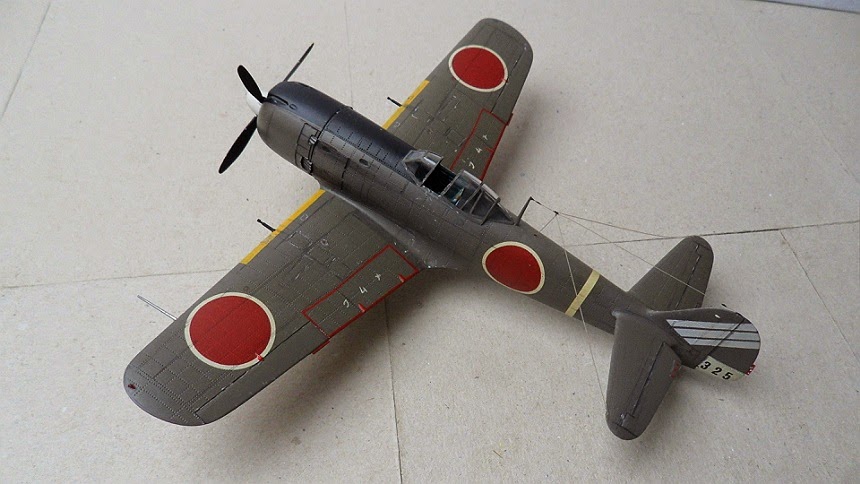 The 73rd Sentai was one of the late war units formed in Japan on Hayate in May 1944 together with its sister units in the 21st Air Brigade, the 71st and 72nd Sentai. The unit was more or less annihilated in the Philippines where it had provided 3rd phase reinforcement as part of Sho Go # 1 staging via Shanghai and Heito, Formosa. The tail marking was reportedly not distinguished by the Chutai colour, being red on unpainted machines and white on camouflaged machines. The Chutai colour distinction was restricted to the spinner, sometimes the radio antenna mast and the lower rudder on which the aircraft number was painted. 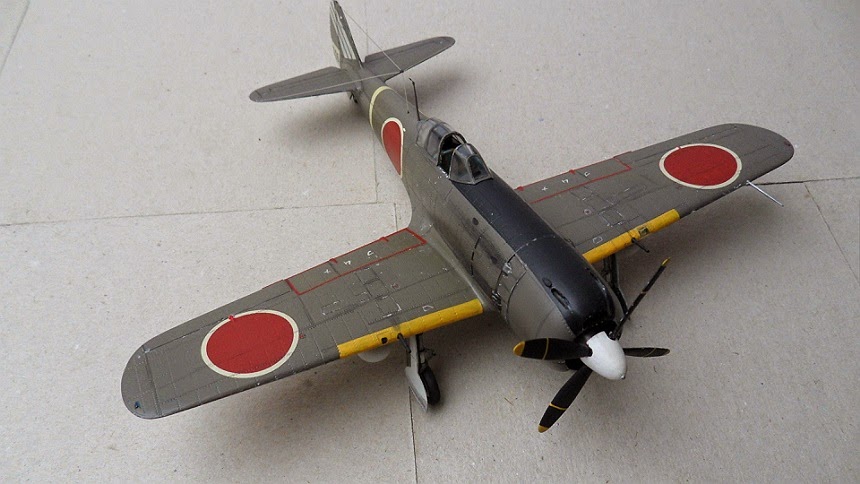 Some of the unit's pilots and aircraft were lost in suicide operations in the Philippines but it was unlikely that any of the 21st Air Brigade Hayate units were ever at full strength there and probably little more than over-sized Chutai in numbers. The bulk of the Brigade was evacuated in January 1945 and the 73rd was unofficially disbanded in March 1945, its surviving pilots and aircraft being incorporated into the 71st Sentai which had been transferred to the 12th Air Division. 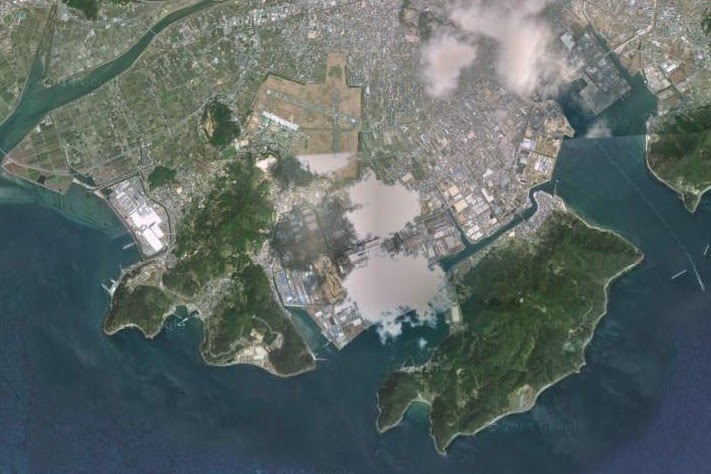 The 71st ended the war at Hōfu (Bofu), Japan in the Western District as part of the 6th Air Army where it relinquished its Hayate as part of the Sei Go (Control) reorganisation and was partially re-equipped with the Ki-61 Hien, having only seven on strength in July 1945. After the war Hōfu was repaired and reconstructed by No.5 Airfield Construction Unit RAAF  for use by 81 Wing RAAF as part of the occupation forces. It was subsequently used by the USAF 347th Fighter Wing equipped with F-61 'Black Widow' and F-82 'Twin Mustang' night fighters. 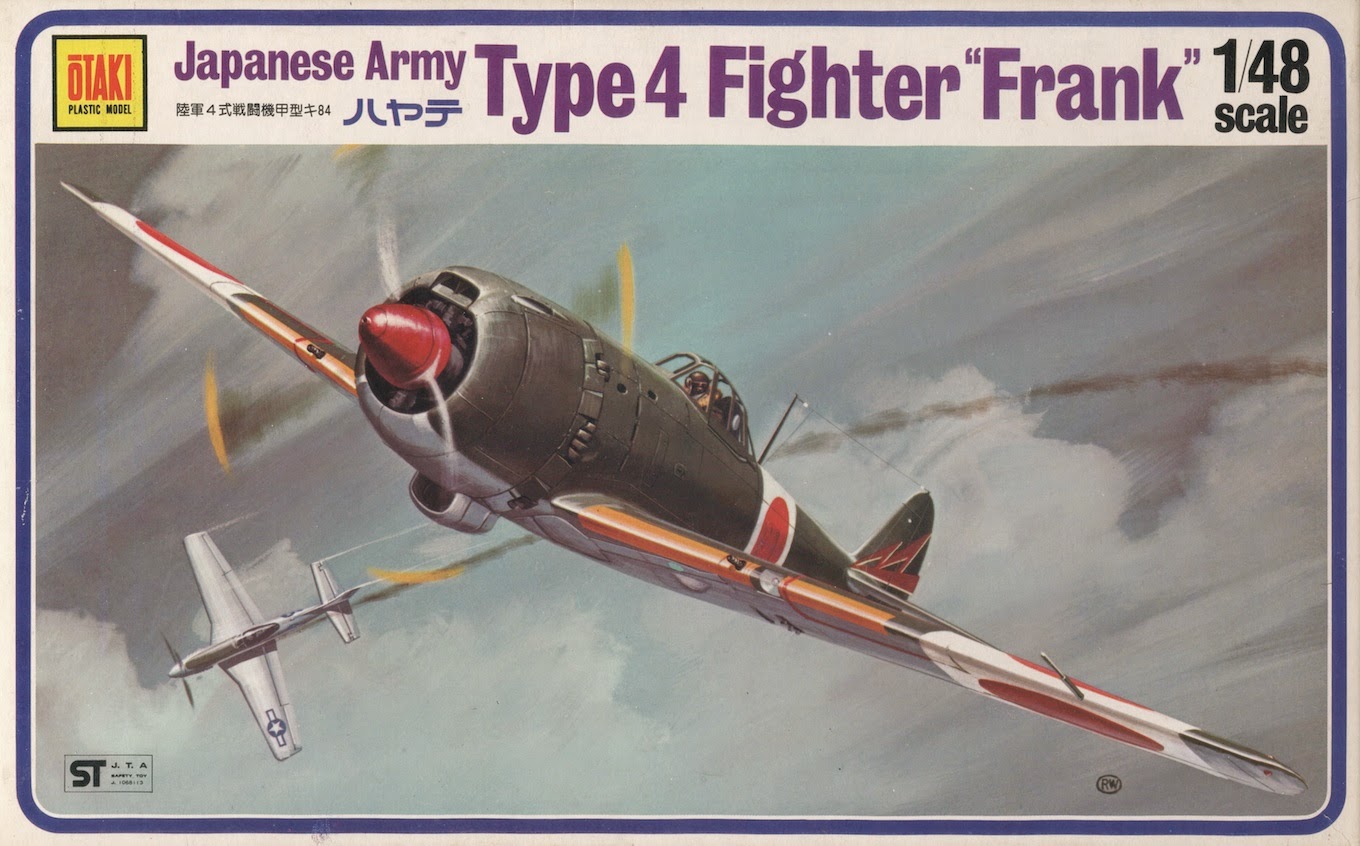 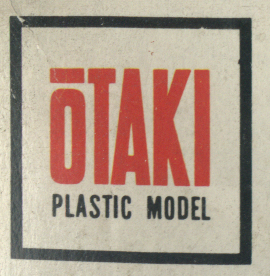 The first (?) artwork showed the P-51 being shot down but the subsequent artwork, perhaps re-considered for the anti-violence era, depicted a more ambiguous outcome with the Hayate pilot watching the Mustang banking behind him. Both types of box art appeared overseas via Scale Craft, the first early issues having an adhesive label on the box and both subsequently appearing in boxes re-printed with the Scale Craft logo. 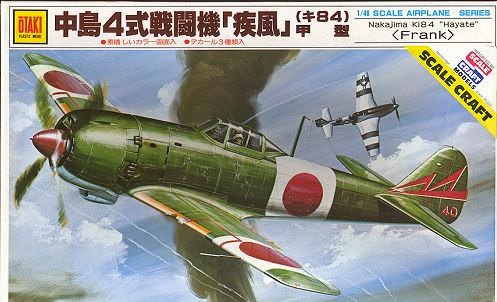 The original kit offered decal options for '40', 2nd Chutai, 47th Sentai (as shown on the box art) and '91', 3rd Chutai, 73rd Sentai together with a 1st Sentai example that required the rudder to be painted (it was not understood at the time that this unit also painted the elevators in the Chutai colour). Upper surface of the 47th Sentai example was called out as dark green colour (暗緑色) using Gunze Sangyo laquer # 16 with the under surface to be left in the colour of the plastic - grey-green - and clear varnished. The upper surface colour depicted on the box art seemed to become a brighter green with each re-issue but the original is most true to life. Hayate was never the colour of a well known frog. 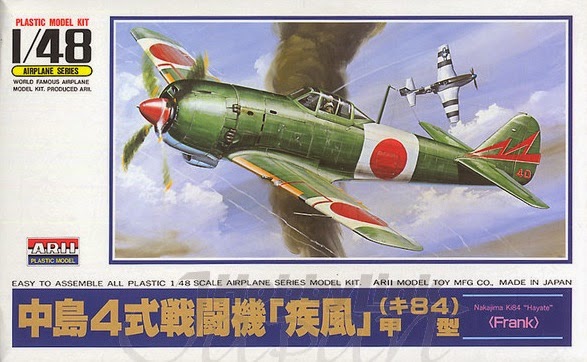 For those wishing to retro-build Otaki's Hayate there are good alternative decal sheets available, two from Lifelike as 048-13 and 048-31 and a Sky Models sheet 48-041, the latter having no less than 21 subjects. There are also several Montex masking sets available for those who might wish to paint Hayate markings, although they are designed for the more modern Hasegawa kits, and plenty of aftermarket detail enhancement sets in resin and photo-etch. Pairs of resin replacement seats are available from Ultracast (with or without seat belts) and from SBS with photo-etch seat belts.

he has done an awesome job on those kits.
I honestly don't think I could do so good.
those painted-on marking are quite well done!
I don't think I would attempt something that elaborate.

Thanks for showing us these - they look great, John!

Another excellent set of scale models John! Beautiful work. I shared the link to this article on my Facebook group dedicated to the "Frank": https://www.facebook.com/groups/Ki84Frank/