With the boxes marked predominantly 'Shidenkai' it is easy to presume that Aoshima's latest pair of 1/72nd scale releases are just re-issues from their much hailed 1996 Shiden Kai kits. But in small lettering on the boxes are the designations 'Kawanishi N1K3-J' and 'N1K3-Ja' revealing that these kits are supposed to represent the Model 31 with its boosted armament of two synchronised Model 3 13mm machine guns in the cowling position to augment the four wing mounted 20mm cannon and the engine mount extended by 15 cm to accommodate them.  In fact despite these designations the box art and markings options of the first kit (above), moulded in grey, represent the two prototypes (# 517 and # 520) of the Model 32 - N1K4-J - a Model 31 with a Homare 23 engine equipped with a low pressure fuel injection system replacing the Homare 21 of earlier models.

The second kit (above) also conceals a secret because, despite the box art showing Shiden Kai on a carrier deck with a carefully concealed unit tail code, it offers only the tail code for the prototype of the Model 41 N1K4-A - a carrier capable Model 32 with an arrestor hook -  コ-K2J-5 (in black or white) of the Koku Gijitsu Sho (Naval Air Technical Arsenal) at Yokosuka in an overall yellow scheme. And just so you get the idea the kit is moulded in vibrant orange yellow too! The prototype was reported to have conducted carrier landing trials on Shinano although none were produced, so the finished model could be legitimately displayed on a carrier deck base.

Both kits contain new longer fuselage halves with the double row of cooling slots and provision for the arrestor hook, filled by an insert in the first kit and a hook in the second. There is a new cowling with the machine gun troughs although sprue frame B from the previous kits which has the older cowling, marked 'not for use', is still included. 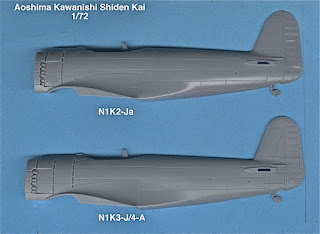 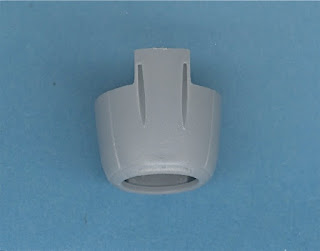 Sprue frame C from the older kits also has several other parts marked 'not for use' because there is an entirely new frame G which includes improved engine and cockpit interior parts as well as an under cowling insert to facilitate use of the original kit wings. 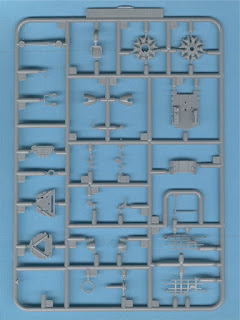 The old relief moulded engine is redundant and replaced by a two part radial - although the moulding is a little flabby. The final reduction gear and pitch control unit is now made up of five separate parts and somewhat inexplicably the spinner is in two halves. The interior parts now include extra seat mounting parts, control levers, separate rudder pedals, gunsight frame, separate sidewall frames and a nicely engraved instrument panel. As with previous kits there are optional parts to display the canopy in the open position but no separate flaps. 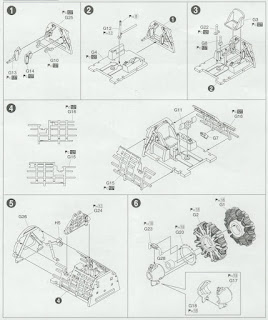 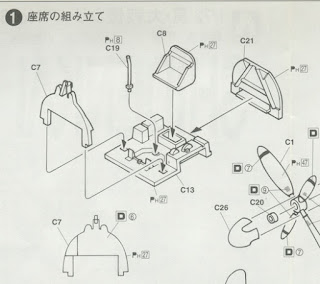 Some might look askance at the Hinomaru on the modest kit decal sheets but they are printed in the correct to standard very bright red colour, although the wing leading edge IFF strips look too lemon.

So there is much more to these kits than just longer fuselages and a new cowling and they provide the potential for cross kitting to improve the older kits if prototypes and what-ifs are not your thing (we'll explore the previous kits in the Aoshima Shiden and Shiden Kai family tomorrow). But in addition to enhancing a Kawanishi fighter line-up (only the Model 25 N1K5-J with Ha43-1-1 engine and two seat N1K2-K are now missing) they do inspire some speculative modelling, with a Model 41 perhaps displayed on a carrier deck with suitable Kokutai tail codes, a Japanese Bearcat, positing a Midway disaster that wasn't so disastrous.