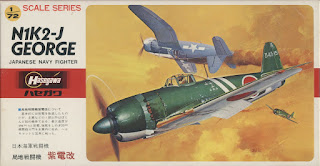 The Hasegawa Shidenkai dates from 1977 and was a stablemate of their J2M3 Jack to the same scale. It is listed in a Trade Fair report in Scale Models (UK) magazine of April 1977 (p.199) and appeared in the 1978 Hasegawa catalogue as 'N1K2-J George' with an image of a built up model. Until recently it was still listed in the standard range and retailing from HLJ for ¥640 (about £3.48/$US5.21) which makes it 38 years old. 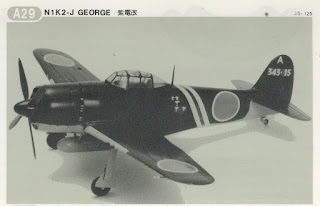 The first issue was in the 'red' series box as A29 (heading image) and moulded in dark green plastic. The box ends of this kit include the number JS-125 which Burns* lists as being a separate issue kit from 1980. The 1978 catalogue image (above) includes both numbers so make of that what you will. Early Shikeo Koike box art depicted a pair of aircraft from the 343rd Ku despatching an anonymous Corsair in a sky of orange tinted miasma. From 1982-87 the kit was released in the 'blue' series as B1 with the same box art (below) and still moulded in dark green. The JS-125 number on the box end was replaced with B001 which Burns also lists as a separate issue for 1981. Markings options in both releases remained the same - 'A 343-15' of the 343rd Ku's 301 Hikotai flown by 1Lt Naoshi Kanno, the Hikotai leader and 'C 345-45' of the same unit's 701 Hikotai flown by 1Lt Takashi Oshibuchi, also the Hikotai leader. The tail codes and the twin fuselage bands on both aircraft were presented as white. 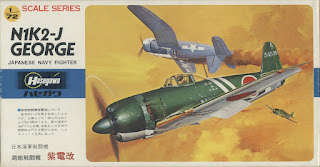 In 1987 the kit was re-issued moulded in light grey plastic in a larger box as number 506 with colour photos of a made up model on the side and the same box art boldly re-presented to 'zoom in' and depict the Shiden kai in an inverted position. At the same time the image was modified to present the tail code and twin bands in yellow with a large white number '15' added to the fuselage Hinomaru. The kit decal sheet, for the same two options, reflected those changes with 1Lt Oshibuchi's aircraft also given a makeover with yellow tail code and red bands. At one time it was believed that the bands were painted to represent a Hikotai colour sequence but more recent research based on the testimony of veterans suggests that the bands were probably white on Oshibuchi's aircraft and yellow on Kanno's, being the same colour as the tail code. The temporary white number in the Hinomaru is based on a photograph but it has also been shown faded and/or painted over. What didn't change was the suggestion in the kit instructions to paint the under surface light grey using Gunze H61/35 IJN Grey and described in that misleading but persistent cliché of 'light/bright ash white colour' (明灰白色). Burns lists this kit as being issued in 1988 and a further release as AT-06 'announced' in 1992. When it appeared the 1992 release (below) was numbered AT6 and the box art reversed the bold inversion of 506 but with same 'zoom in' presentation. 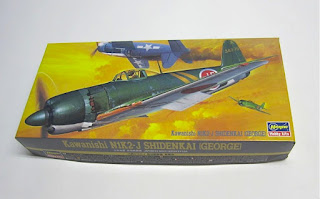 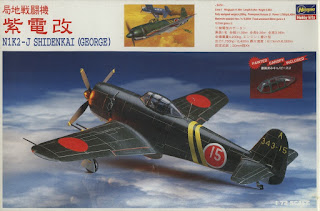 1997 release as SS2 with pre-painted canopy

In 1997 the kit was added to the 'Super Series' with pre-painted canopies as SS-2 with the subsidiary number 03002 (above). It was in an even larger box with a colour photograph of a built and painted model and the original Shigeo Koike art as a small inset. This kit included only markings for 1Lt Kanno's 'A 343-15'. The instruction sheet in this kit is different, Tamiya-like in style and containing snippets of generic modelling advice at each stage, apparently aimed at the younger or less experienced modeller. Unusually for Hasegawa the colour suggestions reference both Gunze and Tamiya paints.

I'm not sure when the current 'standard' boxing (above) first appeared but my example is dated 2004 and numbered A6 with the subsidiary number 00136. The box art and markings options remain unchanged from 1987.

The Kit Itself ~ An Appraisal

Hasegawa's Shiden kai, now approaching its mid-life crisis, was finally upstaged - dare I say it - by the Aoshima kit in 1996 and is further relegated, if still in production, by the revision and improvement of the latest release of that kit. The Hasegawa kit represents the later production Shiden kai with the narrow chord tail fin, equivalent to the Aoshima kit # 6 (017517).  I have always rather liked it, warts and all, and view it in the context of its contemporaries, such as the Airfix FW 190 A/F and Me 163. Compared to its mainstream predecessor, Nitto's 1/75th 'Sidenkai' (sic) from 1964 (of which more anon), and at the time it was released it appeared a masterpiece of engineering and scale fidelity. Nowadays, with the trend in modelling towards an expectation of minute accuracy in every panel line, cockpit interiors of crowded complexity and long hot arguments over shape issues, it is perhaps viewed more critically. 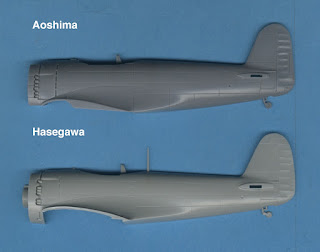 The Hasegawa Shidenkai kit is presented on two simple, sharply moulded self-contained sprue frames with a separate clear frame providing a single canopy in the closed position. Panel line detail is crisply engraved with exhaust outlets and cowling flaps moulded integrally with each fuselage half. The lower pair of exhaust outlets are also moulded integrally with the fuselage halves and decidedly fuzzy in comparison to the better defined outlets on the Aoshima kit which are moulded as part of the single piece lower wing. The lower cowling intake ducting in the centre section is moulded as a separate part in the Hasegawa kit whilst it is integral to the lower wing in the Aoshima. 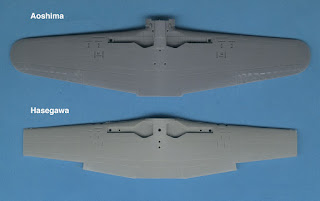 The wheel wells are devoid of detail but enclosed and whilst too shallow they are not as bad as some. The main undercarriage covers are moulded in one piece, separate from the struts and must be cut for the model to be displayed wheels down.

Simplified cockpit detail in the Hasegawa kit ~ but good for 1977!

Cockpit detail is minimal but was considered good at the time, consisting of a floor with rudimentary rudder pedals, separate stick, seat and rear bulkhead. The separate instrument panel is flat with the instrumentation provided in the form of a decal. Early kit instructions suggest 'blue bamboo colour' (aotake - 青竹色) for the cockpit interior but this was later changed to Gunze (GSI Creos) H340 Field Green (FS 34097). The engine is a relief moulding with the final reduction gear and pitch control unit as a single separate piece. The propeller unit consists of the four-bladed prop, spinner and back plate as three separate parts whilst the cowling is moulded in one piece. There are parts included for the drop tank with separate sway braces. 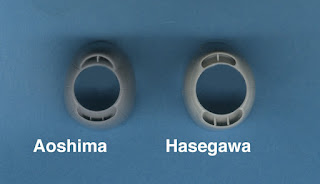 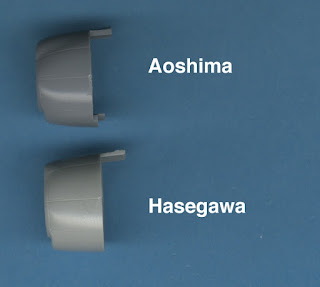 The Hasegawa cowling has deeper and more pronounced intakes than the Aoshima cowling, which is slightly more tapered all round, but the revised and updated Aoshima Shidenkai kit recently released (below) has a new cowling as well as a more detailed cockpit interior.

In terms of shape pinning things down is only marginally easier than knitting fog. The Aoshima fuselage ahead of the windscreen is shallower than the Hasegawa but deeper and more boxy to the rear. It has been asserted that the Hasegawa kit is too shallow but the tapering up of the lower rear fuselage line and the shape of its tail fin and rudder assembly appear to have the slight edge - depending on which plans are consulted. The tail fins and rudders of both kits are slightly too short in height. It is always fascinating how minor shape issues are glossed over in the clamour over newly released kits, but quickly seem to become 'fatal flaws' and ultimately, and often in a surprisingly short space of time, the kit is dismissed as a serious contender.

A neat little kit seems to sum up the Hasegawa Shidenkai, asserted shape issues and alleged inaccuracies notwithstanding. It is a simple, rapid and enjoyable build, recommended as such even today. My own biggest disappointment with it was melting the prop with a hair dryer when once attempting to photograph it with the prop turning (doh!). There is an enthusiastic build review of the kit at Modelling Madness, here and it is certainly a pleasant and undemanding weekend project out of the box.

I built that kit in 1980, at the high tide of my confidence in the unbeatable accuracy of Hasegawa kits--especially Japanese subjects. I was soon to realize that the outline accuracy of the average Hasegawa offering back then was well below that of Matchbox, but I didn't question their Shiden-Kai. How could I? The germane references in my hands back then were: Fighters Vol. 3 by William Green and Donald Thorpe's IJNAF colors and markings book-and that was a good thing. Back then I actually finished kits sometimes.