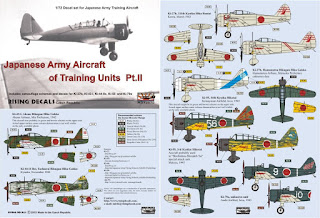 We'll soon be back to Zeros (and Aces) but in the meantime the latest Japanese aviation related sheet from the prolific Rising Decals is RD72070 for Japanese Army Aircraft of the Training Units Pt.II with markings for nine subjects including the Ki-27, Ki-55, Ki-79, Ki-43 and Ki-44. The individual subjects are as follows:- 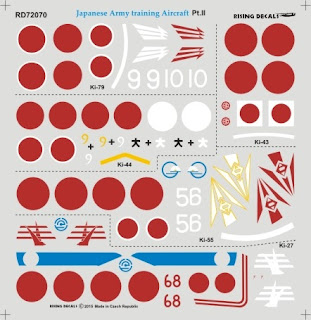 This is yet another excellent sheet from Rising Decals offering some interesting and unusual alternative schemes for popular Army training aircraft models. Army training unit nomenclature and organisation can be confusing but fighter training units were designated processionally upwards from Renshu Hikotai, (approx. Training Transformation Air Unit) which provided basic flying training in dual control biplanes, to the subsequent Kyoiku Hikotai (approx. Educational Air Unit) where students flew the Ki-27, its single and two seat trainer variant the Ki-79, and the fighters they would eventually fly in combat such as the Ki-43 and Ki-61. Finally in the Rensei Hikotai (approx. Learning Air Unit) student pilots received advanced operational training and were taught combat tactics such as the rotte system. The Rensei Hikotai were frequently used to provide an auxiliary air defence capability.

With special thanks to Mirek of Rising Decals for providing the review sheet.


Hi Nick,
A big thanks to Rising Decals! RD 72070 is the one I was waiting for. A very nice one, my only remark is not about the decals but about the Ki55 of 34th Kyoiku Hikotai,
this particular plane was not fitted with wheel covers as showed in the side-view.

Thanks very much for that information! I'll add it to the blog.

These look beautiful as usual! RE: Ki-55 of 34th Kyoiku Hikotai (White #56) - the tail insignia looks very similar to the 28th FR, do you know if there were any connections there? Rising always has a knack for finding unusual and interesting markings.

I'm not aware of any connections. In July 1941 the 28th had been re-organised as a Dokuritsu Hikotai (Independent Air Group) with a HQ and the 81st, 82nd and 63rd independent squadrons under command equipped with the Ki-46. In January 1944 after it had pulled out of the New Guinea theatre it was again designated as Hiko No.28 Sentai and transferred to Manchuria and China. It was sent to Japan in November 1944 and according to one source there incorporated the fighter sections of the Dokuritsu No.17 Chutai (Independent Air Squadron) which were equipped with Ta-Dan bombing Ki-46. In December 1944 it was re-designated as a specialised high altitude interceptor fighter unit equipped initially with the interceptor version of the Ki-46 then from June 1945 the Ki-102. With the organisation of the Air General Army under Gen Masakazu Kawabe in April 1945 it was listed as a fighter unit in the 10th Air Division. But in July 1945 it was re-designated as 28 Dokuritsu Hikotai and in July and August 1945 listed officially as a HQ Recon unit coming directly under 1st Air Army command. There is some uncertainty about its late war insignia and how its Chutai were distinguished.

Great review of the latest Rising Decals release - I knew there was a reason I've been stockpiling Fujimi Ki-55 kits!