Two new and one recent resin sets from Rising Decals in 1/72nd scale offer opportunities to model interesting variations on some well known Army fighter types. Each set contains a small decal sheet appropriate to the subject and they are priced at £4.99 each in the UK. 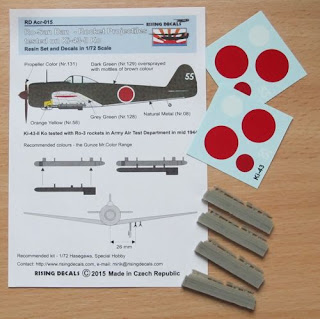 RD Acr-015 is a welcome set of Ro-San Dan (Ro-3 ordinance) experimental air-to-air rockets for the Ki-43-II with markings for aircraft '55' of the Army Air Testing Centre in mid-1944. The set consist of four resin rails and separate rockets to be installed two to each wing on the Hasegawa or Special Hobby kits.  The test aircraft displays an unusual camouflage presumed to be a well delineated dark red-brown mottle over dark green. A photograph of this aircraft may be seen in a 2009 Aviation of Japan blog here. The camouflage might also have been a dark green mottle over a light brown or lighter green base colour. The decal sheet consists of white-bordered Hinomaru in six positions and the white numerals '55' for the rudder. Colours of the rails and rockets are unknown but are shown in what appears to be grey and black respectively. 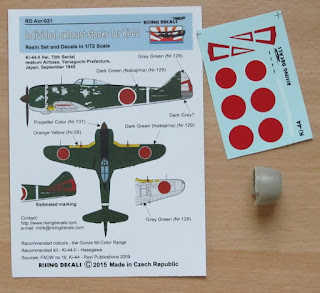 RD Acr-021 is a replacement resin cowling with individual exhaust stacks for a late production Ki-44-II Hei intended for the venerable Hasegawa kit, filling a gap in a Shoki variant line-up. The exact number of Hei machines produced with these individual stacks is unknown but photographs of them are rare and decals are provided for the only known example, an aircraft said to be from the 70th Sentai photographed at the naval air base at Iwakuni, Japan in September 1945. It is possible that the rudder was taken as a replacement from another aircraft belonging to that unit but according to Richard M Bueschel* the 70th received a few aircraft of this type and one was flown by the commander of the 47th Sentai. The individual 'jet' exhausts were first installed on the Ki-44-III prototype, a modified Ko manufactured in June 1943 and in production the Ko version of this variant was expected to have an increased wing area, enlarged tail, Ha.145 engine with four-bladed prop and Ho 5 20mm armament in the fuselage and wings. The Otsu version was expected to carry Ho 203 37mm armament in the wings but neither went into production, presumably their need supplanted by the Ki-84. Although the badly worn colour scheme is suggested to be 'Dark Green (Nakajima)' (Gunze 129) in the instructions an alternative possibility is the late war olive brown # 7 colour. The decals consist of Hinomaru in six positions, a white senchi hiyoshiki fuselage stripe and the full 70th Sentai insignia in red. Curiously when artist K Hashimoto drew the Ki-44-III profile plan for the older FAOW series he depicted it with the individual exhausts configured in two sets of three rather than the 1, 2, 3 configuration seen in the Iwakuni photograph, even though that photo was included in the book. 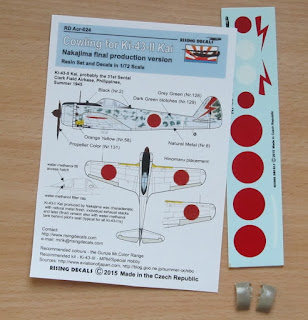 RD Acr-024 consists of two replacement resin cowling panels to model the Ki-43-II Kai using the Special Hobby Ki-43-III Ko kit. The cowling front from that kit will be needed so using this set with the Hasegawa kit would require some ingenuity and fettling. The individual exhaust stacks on the Nakajima-built II Kai were in a different pattern to the Tachikawa-built III Ko, with a distinct single upper stack curving downwards, but the two versions have often been confused, especially as late production II Kai also had the water-methanol system installed with filler spout under the cockpit canopy. Decals are included for an aircraft presumed to be from the 31st Sentai as photographed at Clark Field in the Philippines in the summer of 1945.

The 31st was originally a Ki-30 'Ann' light bomber unit established in August 1938 from a re-organisation of the 5th Flying Battalion. The unit served over Thailand and Burma at the start of the Pacific War, then in July 1942 was withdrawn to Tunhua, Manchuria as part of the 10th Air Brigade (together with the 27th Sentai) and the following year began converting to a fighter unit equipped with the Ki-43. The unit was subsequently transferred to the Philippines (along with other units of the 2nd Air Division) to become part of the 13th Air Brigade ostensibly together with the 29th and 30th Sentai. The transfer of units from Manchuria to the Philippines was started towards the end of May 1944 and completed by early July. The 29th Sentai, which had re-equipped with the Ki-44, was detached from the Brigade and transferred directly from Manchuria to Formosa in July 1944. At the beginning of the Philippines invasion the 30th and 31st were based at airfields around Clark but thereafter their status and operations become uncertain. 4th Air Army Operations records suggest that they were operating with very small numbers of aircraft and were not only probably consolidated together but perhaps with other Ki-43 equipped units.

The 31st Sentai insignia of a lightning bolt was said to be red for all aircraft with the Chutai (squadrons) distinguished only by the number of horizontal white stripes displayed behind that - one for the 1st, two for the 2nd and three for the 3rd Chutai. However, the absence of white stripes on this Ki-43 suggests that the Chutai designation system might have been changed or that the number of aircraft available for operations precluded the need to distinguish the Chutai.

With special thanks to Mirek of Rising Decals for providing these sets for review.