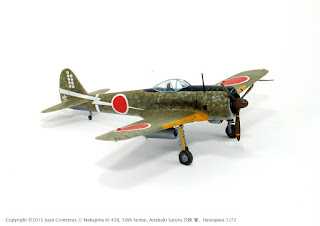 This splendid Ki-43-II model built by Juan Contreras from the Hasegawa kit demonstrates both its basic fidelity and his skill. The model represents the controversial 50th Hiko Sentai ace Satoshi Anabuki's Fubuki (吹雪 - Snowstorm or Blizzard) in a personal but convincing interpretation of camouflage which has been variously depicted over the years. Juan's model wears a similar scheme to the Rikyu Watanabe artwork of Anabuki's Kimikaze (君風 - Imperial Wind) gracing the cover of 'Japanese Army Air Force Fighter Units and Their Aces' (Grub Street, 2002). 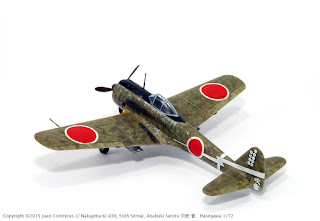 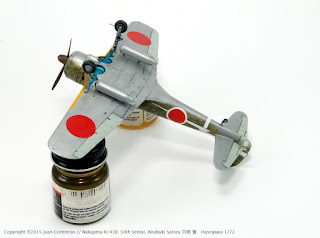 Juan used Vallejo Model Air paints for the camouflage, representing the dark green over dried grass colour with 71.043 Olive Drab and 70.610 IJA Karekusa iro, with Tamiya and Mr Color (GSI Creos - Gunze) paints for everything else, except the spinner hub, which is White Ensign Colourcoats paint. 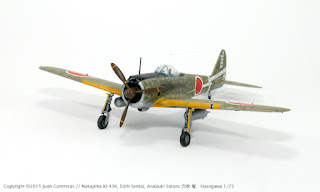 When the 1/72 Hasegawa Hayabusa was first released in 1982 the instructions for Anabuki's aircraft called for a mottled finish of "khaki green spots on dark green" using the old Gunze paints # 15 (dark green) and # 55 Khaki (ka-ki カーキ). The box art by Shigeo Koike depicted a rather indeterminate mottled scheme of dark and light greens. Rikyu Watanabe's cover art depicted Kimikaze's camouflage as a more regular dark green mottle over a solid base of dried grass colour - a slightly greenish sand brown. There is a complication (and digression) here in that the IJAAF paint colour standards included both Kaki iro - 柿色 - which actually means persimmon colour - an orange brown - and Karekusa iro - 枯草色 - the dried grass colour.  Ka-ki colour カーキ色 (Katakana) and Kaki colour 柿色 (Kanji) are distinct and different. The former now covers a broad perception from the wartime drab brown Japanese Army colour to a more modern greenish khaki, often approaching an olive green. The persimmon colour included in the IJAAF standards is a much stronger orange brown. But there is the potential for much confusion. Further complications arise from the colloquial tendency to describe khaki as dried grass colour and vice versa.   With the re-issue of the Hasegawa kit in 1987 the instructions for Anabuki's aircraft were revised to suggest a dark green mottle over natural metal finish, probably based on an interpretation of photos showing Anabuki standing by his aircraft or in the cockpit at Akeno.

With special thanks to Juan for sharing these images of his excellent model.

Again, a jaw-droppingly beautiful build that inspires. Thanks so much for the added info. One day . . . one day I'll get a Hayabusa built!

Beautiful model of Hayabusa. Congrats... But I have a question... if this marking of Anabuki's plane shouldn't be on the Ki-43-I version? I think I saw it somewhere...?

There was a similarly marked Ki-43-I flown previously by Anabuki and Lt Shigeru Nakazaki but with plain dark green camouflage, also called 'Fubuki' and bearing a victory tally.