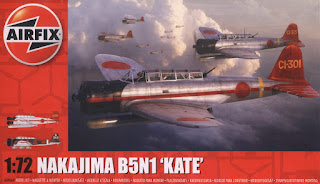 The new Airfix B5N1 is now out and very nice it is too. Essentially the same as the previous B5N2 kit but with a new sprue for the forward fuselage, engine and cowling. Decals are included for the very colourful 'CI-301' of 3 Ku operating off the carrier Zuiho in 1941 or '9 over 348', a green and brown field-camouflaged example from 14 Ku operating from Sanzao Dao in South China during 1938-39. The decal sheet is sharply printed in good colour by Cartograf and includes stenciling, wing walkways and instrument panels for pilot and navigator (not strictly accurate for the latter). The painting and decal instructions are in full colour with closest Humbrol paints called out to avoid mixing. 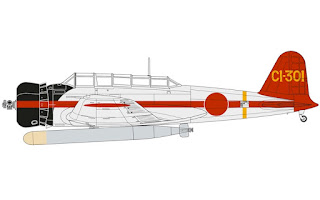 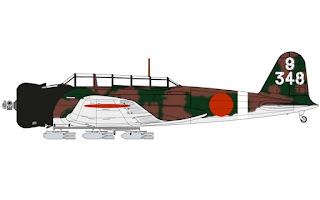 Moulded crisply in light grey plastic with engraved details, features of the kit include the option to display the finished model with the wings folded. Sensibly the wing parts are provided as single upper and lower halves which need to be cut for folding with rib frame inserts for the open ends. In addition the flaps can be fitted in the lowered position and the ailerons, rudder and elevators are all separate pieces to permit animation. The panel lines are finely engraved and the representation of the fabric covered components with light dishing between ribs is superior to that in many Japanese kits where the ribs are moulded as hard raised lines above the aerofoil surface. A fairly detailed interior benefits from another option to show the canopies open - no cutting this time as alternative parts are included. A nice touch is a third alternative for a closed canopy for pilot and navigator but with the rear canopy fairing open and the radio operator's gun deployed for action. In the kit examined for this brief in-box review the clear parts are perfect with none of the unfortunate moulding flaws found in some other Airfix kits recently. A full crew of three is also included so with imagination the canopy and flying control options will permit the creation of dramatic in-flight displays. The detailed instructions include the need to cut off the indicator pins on the top surface of the wings if a retracted undercarriage is selected.

The kit contains the same selection of ordinance as for the B5N2 but with options in the instructions only for the torpedo armed aircraft or an aircraft loaded with six Type 97 No.6 60kg bombs for attacking land targets - a suitable load for the 14 Ku option. This provides a spare Type 98 No.25 250 kg bomb (parts 03 and 04 on Frame D) to make up the deficit for a staggered twin bomb option in the B5N2 kit. These and the larger bombs can also be put to use in other kits.

The glitch in the otherwise superb box art is my fault. Here the fatal eror of presuming rather than checking occurred and I suggested that the red fuselage stripe on CI-301 was a command marking rather than common to reserve fleet aircraft as is now apparent. The artist Adam Tooby had it correct from the start with the aircraft in the background also bearing the stripes and subsequently modified it only at my suggestion. So please blame me rather than Adam or Airfix research.  Mea culpa!

This is an impressive kit of a historically important aircraft showing great attention to detail by Airfix and offering the opportunity for creative and imaginative displays. It really does render the veteran Mania/Hasegawa kit obsolete. With the fine Airfix A6M2 the Pearl Harbor trio is almost complete but sadly a re-tooled D3A1 seems unlikely. I should love to see a new Airfix kit of that type to the same quality as this fine production.

Now we need decals for the Ryujo planes at Dutch Harbour.

A very informative post on the kit, I've built the Hasegawa kit and yes, this Airfix one is superb! (Apart from some of the decals for the instrument panels) Just a quick question: If the radio operator/gunner is operating the rear gun does he stand or does the chair swivel round? I want to turn mine into part of a diorama but I can't find this information!

Thank you for this inbox review Nick. Amazingly, someone already posted a completed kit over at the 72nd Air forum the other day. Looks great IMHO:
http://z15.invisionfree.com/72nd_Aircraft/index.php?showtopic=8373

Definitely one for me to pick up.